There are 1,700 kilometers along the Yangtze River from Chongqing to Shanghai. It is hard to develop foreign trade eastwards. Therefore, it becomes a problem to expand opening-up with underdeveloped logistics. However, the solution lies in the south! A “New International Land-Sea Trade Corridor (ILSTC)” born at the right time.

At 10:20 of April 10, a freight train carrying 25 containers departed from Tuanjiecun Railway Station of Chongqing. Wang Yupei is Chairman of China-Singapore Southward Channel (Chongqing) Logistics Development Co., Ltd. He said: “The train, carrying auto parts worth a total of over RMB 8 million, will arrive at Qinzhou Port in Guangxi within two days, and customers in India will receive their cargoes within 20 days. Besides, this is the first customized special train to India.”

The description for the route of ILSTC

The land-sea trade and logistics passage, which departs directly towards the south, can save at least 2 weeks compared to river-sea intermodal transport.

Lin Xiang, Manager of Pacific International Lines (Chongqing), said that they had more than 200 containers transported by river-sea passage each week before. Since last year, they put half of their cargoes on the land-sea route, including the motorcycle parts to be exported to Africa in a few days.

What’s new about ILSTC? It is a new route, of course. Besides, it is also a new form of logistics, which sees the regular operation of land-sea transport, cross-border road transport and international railway transport. Thus, companies are able to freely combine the three to minimize cost and improve efficiency.

Even a newly-released sneaker in a shopping mall of Chongqing is an outcome of ILSTC. This batch of sneakers was produced in Southeast Asia with raw materials from Germany. Through ILSTC, they arrived and were cleared in Guangxi. Afterward, they got to bonded warehouses of Chongqing within 2 days by roads. Part of them went into China’s market and the rest were transported to Germany by China Railway Express (Chongqing) in no longer than 15 days, roughly one month shorter than sea shipping. 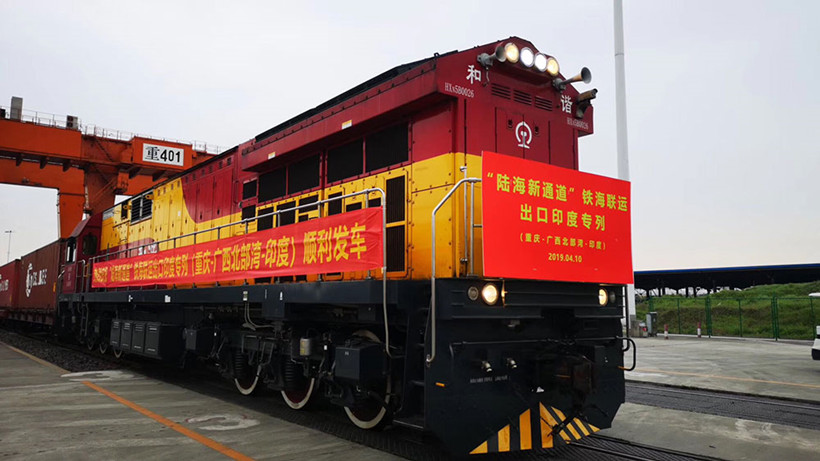 ILSTC attracts growing interests from provinces and cities in Western China and enterprises located there. For example, Chongqing, Guangxi, Guizhou, Gansu, Qinghai, Xinjiang, Yunnan and Ningxia entered into cooperation this year to develop the new route, while sharing benefits brought by it. Destinations have covered 166 ports in 71 countries and regions on the six continents.

As a result, potatoes from Gansu are sold in Vietnam; PVC products made in Qinghai are transported to Thailand; aluminous soil from Guizhou are seen in the United States…ILSTC completes the “Belt and Road” in Western China, triggering off more active opening-up to the world.