Invest in Italy under the Belt and Road Initiative: Fewer Barriers and More Successful Cases

The China-Italy Chamber of Commerce (CICC) held a Seminar with the theme“Invest in Italy along the Belt and Road Initiative” in Chongqing on May 22nd, 2019 in CICC`s office, Liangjiang New Area. The Seminar aims at giving a focus on investing in Italy, M&A Legal Environment, International Tax aspects, and Investment tips. Lorenzo Riccardi, CICC Board Member, Managing Partner of RSA Asia Shanghai and Hermes Pazzaglini, Salary Partner from Nctm Legal Consulting, made speeches to explain the tax and investment in Italy or with Italy in countries among the Belt and Road countries. The speakers shared the practical experience of Chinese investors involving in Italian projects, including investment market, case studies, investment screening system, characteristics of Italian companies and recommendations for Chinese investors. 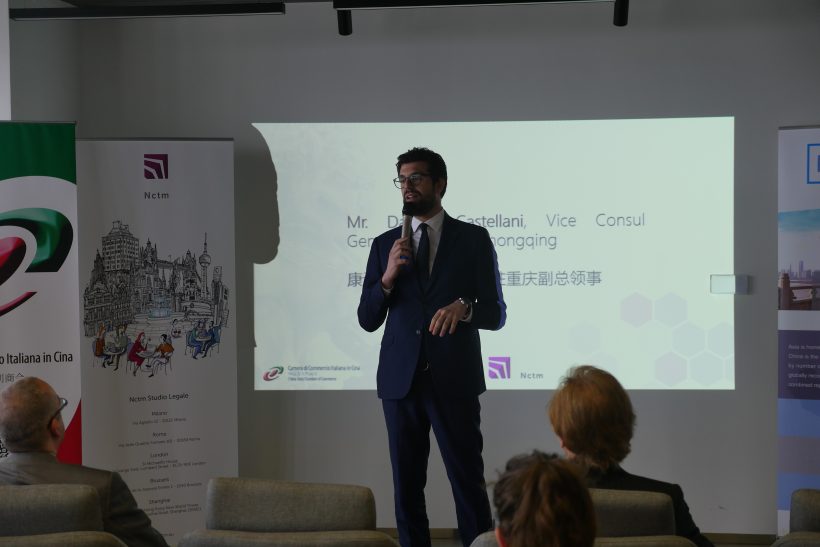 Davide Castellani, Vice Consul General of Italy in Chongqing gave a speech on the seminar.

Italy ranks No.1 GDP (2018) among the other Belt and Road countries

The Belt and Road Initiative (BRI) is relevant to both economic and political terms. BRI focuses on the creation of vast economic areas that are geographically placed on two main corridors. The 2nd Belt Road Forum was held in Beijing in April, where 150 countries and international organizations joined this project. The object of the seminar is to present BRI opportunities and International tax key elements with a focus on Italy. At present, China has signed 107 double taxation agreements of which about 70  were signed with countries involved in the Belt and Road project. Italy also ranks the top among the other countries (except China) on the Belt and Road Initiative (2018).

Initially, Mr. Riccardi explained that Italy has 92 different industrial districts that well known for its innovative business economic sector, which includes a competitive agricultural sector, automobile, naval, industrial, appliance and fashion design. He introduced business taxation and the resident`s tax and incentives. According to Mr. Riccardi, Italy`s tax is levied at the national, regional and municipal levels. Italian branches of foreign companies are subject to IRES and IRAP in the same way as a domestic company. In addition to that, if you hold company dividends in Italy, the domestic and foreign source received a 95% tax exemption. In terms of Mr. Riccardi`s words, there are different forms of incentives for both business and residences.

In terms of Mr. Riccardi`s data below, it shows the tax rates of Italy and China, and it is clear that China provided a lower VAT to attract foreign investment. Italy and China have a close CIT and IIT rate that could provide good conditions for investment on both sides.

Mr. Pazzaglini indicated that Italy is one of the most attractive countries for foreign investors. During 2008-2015, 42% (average value) of the Italian M&A market is invested by foreign companies. In 2000-2017, Chinese companies’ FDI (directly investment) in Italy is around 13.7 billion Euros. In Europe, Italy is the third investment destination for Chinese companies. For example, China National Chemical Corporation (ChemChina) invested in Italian company Pirelli, the 5th largest tire manufacturer in the world. Pirelli & C. S.p.A. is a multinational company based in Milan, Italy, listed on the Milan Stock Exchange since 1922, with a temporary privatization period by the consortium led by the Chinese state-owned enterprise ChemChina.

Mr. Pazzaglini introduced more investment and acquisition cases that China and Italy involved, and more importantly, the investment screening, a policy given by the European Commission. “Some media says that EU is obstructing the foreign investment by this investment screening policy, but in fact, it is not like this.” He explained the reason and how investment screening process, “the member states need to know and agree about what is going on”, he said, and decide whether to approve for the investment projects. Moreover, he emphasized that Italy has a fairly transparent and flexible business policy that could provide good conditions for foreign investors. To conclude his speech, there are successful cases plus the benefits provided by Italian and Chinese government for investment in or with Italy in Italy or China, or among the countries on the Belt and Road.