One weekend in March, Jing Suixin, a rock climber, stumbled across a footprint trace fossil on Gele Mountain. On July 5, Xing Lida, a Chinese paleontologist and associate professor of China University of Geosciences (Beijing), made a special trip to Chongqing with his team. After the on-site investigation, he expressed that these are the first fossilized footprints of early Jurassic carnivorous dinosaurs found in China. Their owners are Dilophosauruses, a genus of predatory dinosaurs, the top predators on our earth 190 million years ago. Their appearances can often be found in movies.

“It is rare, even around the world, to find such a large number of dinosaur footprint fossils in the main urban area of a large city,” Xing Lida explained. 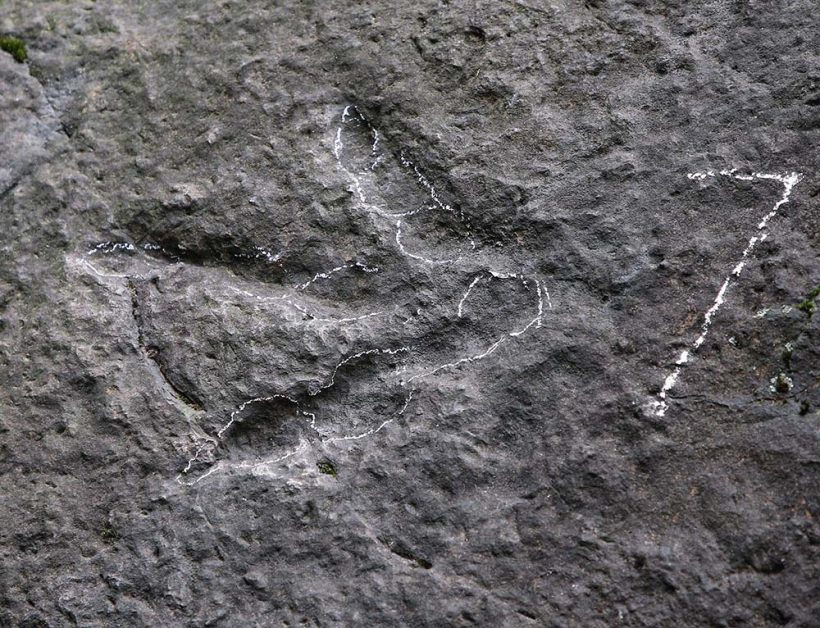 Discovery of the footprint trace fossils

Jing Suixin, a rock climber, took a wrong way during his travel on Gele Mountain. When trying to climb on a cliff with bare hands, he stumbled across some animal footprints on the stones. Later, this graduate of geology sent some photos of his find to Xing Lida, a Chinese paleontologist and associate professor of China University of Geosciences (Beijing).

“I guessed maybe they were fossilized dinosaur footprints, and I had never expected that Mr. Xing would give me a specific answer that they belong to carnivorous dinosaurs.”

After studying the related photos and videos repeatedly, Xing Lida led his team to Chongqing. After photographing, measuring, mapping, referring to a geological survey, Xing Lida offered his conclusion on site: They were footprints of carnivorous dinosaurs, living in the early Jurassic era, 190 million years ago. This discovery is the first one of its kind China has ever seen.

“Most dinosaur fossils belong to the middle and late Jurassic and the Cretaceous period, that is to say, fossils from the Early Jurassic are scarce. The discovery of the Kayentapuses track fossils will provide us with significant resources in studying dinosaurs in the Early Jurassic.” 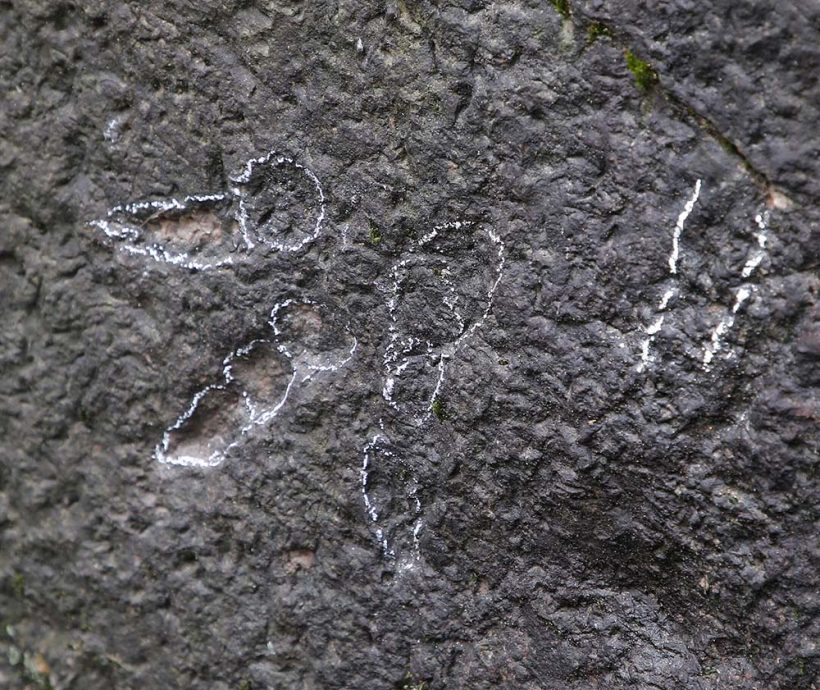 Conclusions deduced from the fossils

Way of moving: the footprint owners are all bipedal, and all the footprints are with three toes obviously, with each of which having clear paws.

Body lengths of Dilophosauruses: the large ones are five to six meters, while the small ones are about three meters.

The dramatic background of the quondam top predators

From the step distances, these Dilophosauruses were very laid-back while passing here, not even at a trotting speed. They strolled through the shoal at a rate of about seven kilometers per hour.

They were not in the same period. Yangchuanosauruses lived in the Late Jurassic, which is nearly 40 million years later than the early Jurassic which saw the existence of Dilophosauruses. So this question doesn’t hold water.

In Jurassic Park, a Dilophosaurus can stretch the wrinkle on the neck for spraying venom to attack enemies, so is it real in our world?

Xing Lida said the Dilophosauruses were top predators on earth in the early Jurassic. However, different from Tyrannosaurus, they mainly hunted small animals, even fish. Thus the truth is they cannot spray venom for an attack.

Due to the small bodies, Dilophosauruses didn’t catch or hunt much larger animals. Comparably, lions never hunt elephants. They fed on small animals and fish. Can dinosaurs catch fish? How? Did they use claws or mouths directly?

Based on the physical characteristics, Dilophosauruses were able to catch swimming fish directly with their mouths.

Some footprints have already demonstrated Theropods’ swimming ability, and Dilophosaurus is one of them. Therefore, it is no need to surprise when seeing a swimming Dilophosaurus catching fish in a lake or river in the early Jurassic.

In films, Dilophosauruses generally have gorgeous colors, then, did they really?

With scales, their skin colors should be dark. The earth in the early Jurassic had no grass or flower, so that bright colors were not conducive to animals’ survival. It was not until the Cretaceous when plants appeared that the animals’ skin colors changed accordingly.

Xing Lida, with years of experience in studying dinosaur footprints around the world, has answered a series of questions. Nearly 200 million years ago, the Gele Mountain was not a mountain, but a large water body. These footprints were left at the edge of the water body, which is often called the river beach or lakeside.

“We hope that this footprint fossil can be preserved completely.” Xing Lida, the Chinese paleontologist and the pioneer in popularizing dinosaurology, hopes that this discovery can be accessible to children in Chongqing.

“Dinosaurs are one of the forever hot topics among young people, and this excavation site is right in the downtown, which will facilitate on-site popularization of paleontology for the young,” Xing Lida said and expressed their worries that this cliff, with fossilized footprints of nearly 200 million years old, might be damaged by some rock climbers. “Chongqing is known as a city on the back of dinosaurs thanks to a large number of dinosaur fossils unearthed from here. Moreover, the tens of footprint trace fossils of carnivorous dinosaurs in the early Jurassic have added to its achievement in this field. I feel obliged to protect them and let them be the witness of the city’s history,” Xing Lida said.