With an elevation of 345 meters, this park is the highest point of Yuzhong District and the old urban area of Chongqing. It’s like an oasis in the city with winding roads, lush bamboos, trees, flowers and plants, and fresh air. Its main attractions include Hongxing Pavilion, Fuyuan Garden, Ziwei Garden, Yingcui Corridor, etc. Because of high altitude, it has always been an ideal place to view the night scene of the Mountain City. Standing in Hongxing Pavilion, one can overlook the Yangtze and Jialing Rivers and the new look of the city.

About 200 meters away from Jiefangbei CBD and covering an area of 1.2 hectares, it is one of the main passageways connecting the Upper City and the Lower City. Trees shade the park, and birds are chirping, the fragrance of flowers, winding and crisscross roads and stone steps, as well as well-arranged flower beds, green belts, pavilions, galleries, rockeries, and monuments. It’s just like a rare oasis downtown, thus becoming the best place for people to relax, exercise, enjoy tea and play chess.

Intro: Known as the “Green Pearl,” it is one of the four natural parks in Chongqing. Stretching for 25 kilometers with the central peak being 584 meters above sea level, it forms part of Eastern Huaying Mountain Range. It was approved to be established by the National Forestry and Grassland Administration in 1988. It is well located and 20 kilometers away from the city center. As one of the leading natural parks in the suburbs of Chongqing and an ecological shelter in the east of the main urban area, it is praised as an emerald on the colored ribbon of Jiangbei District. Covering a forestry area of 12 square kilometers, it is also a natural oxygen bar of Chongqing’s suburbs, free from severely chilly winter and intensely hot summer. Besides, in the forest, there are hot springs, historical sites, Arhat Cave, Dishui (Dripping) Rock, Wuduo Stone, Yingzui (Eagle Beak) Rock, as well as Sengguan (Monk Officials) Temple (Ruins) in which Emperor Jianwen (the second emperor of the Ming Dynasty) once stayed.

Intro: It stands between Chongqing Jiangbei International Airport and Yuelai International Convention Center, covering an area of 1.53 square kilometers. It is 2,400 meters long from north to south and 770 meters from east to west with the narrowest part being 600 meters. The park was officially launched on June 2011 with a total investment of 4.6 billion RMB. Tongmao Avenue connects the east and west of the park while the Jieqing Avenue links the north and south. Integrating Chinese and Western culture and relying on the landscape features of Chongqing, it is a modern urban park which reflects the beauty of natural harmony. Moreover, it boasts five attractions including the Central Plaza, Vibrant Waterscape, Sunny Grass Slope, Peninsula Mirror Lake, and Jungle Streams. 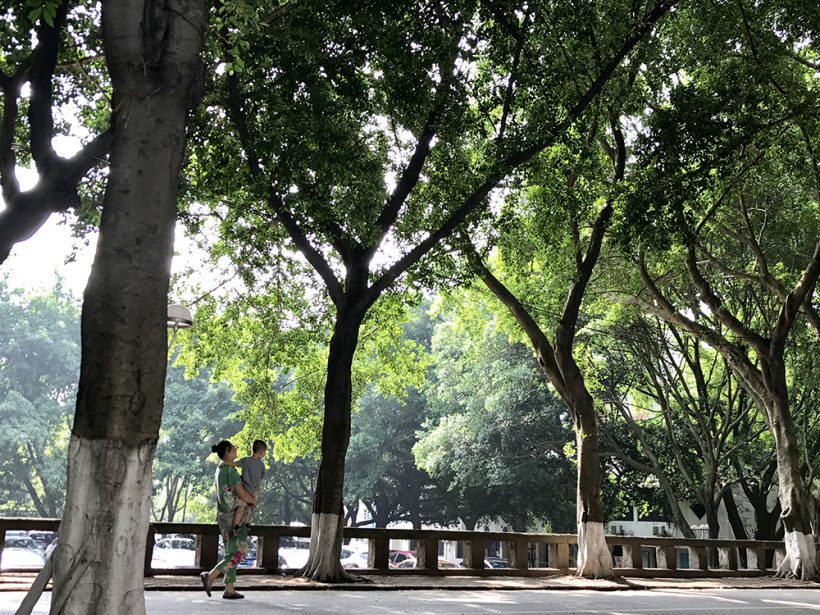 Intro: Located outside the Yangtze River on Nanbin Road, Nan’an District, Chongqing Nanbin Park is a new open belt-shaped riverside park with historical culture and Bayu culture characteristics. It was completed and opened on May 1, 2005, with a length of 6.8 kilometers, an area of 220,000 square meters and an investment of 100 million RMB. It won the 2005 China Habitat Environment Example Award. Following the concept of green development and taking culture as its soul, the park is planned and built with decorative lighting and integrates with the connotation of history and culture of Nan’an District and Bayu culture. Its landscape falls into three parts: 187 elevation road landscape, six scenic theme spots, and a connecting section of 180 beautiful elevation spots.

Intro: Caiyun Lake Reservoir is the first and largest artificial lake built in downtown Chongqing. It was first planned in 2003 and began full-scale construction in June 2007. Caiyun Lake is designed as an ecological lake with an area of about 200,000 square meters and the water storage of 1.68 million square meters. Meanwhile, a high-tech park covering an area of around 933,333 square meters will be built next to it. To fit the artistic conception, Caiyun Lake Park will be made into a “three-dimensional wetland” combining the stream, pond, and terrace, with the wetland on the vertical side. The flow and the lake mainly refer to Taohua Creek and Caiyun Lake respectively, and the terrace relates to the clean water purification system on the shore of the lake. A large number of weeping willows, metasequoia trees, and peach trees will be planted along the creek.

Intro: Gele Mountain is praised as the “Emerald of Chongqing” and the “First Peak of Western Chongqing” for its natural scenery such as a mountain, water, forest, spring, cave, cloud, and fog, as well as its features of elegance, deepness, primitive simplicity, and broadness. The mountain obtained its name from ancient times when Yu the Great invited guests to sing and dance on the hill to celebrate the success of controlling local floods. Reams of historical, scenic spots and myths and legends endow Gele Mountain with infinite aura. Both ancient and modern literary masters came here to explore, compose poems and carve stones, leaving many famous sentences. Gele Mountain Forest Park was rated as the “National AAAA Tourist Attraction” in 2002 and the “National Forest Park” in 2003.