Travel Guide: An Industrial Park, with Memories and Marks of the Past

Chongqing – Located in Southwestern inland China, Chongqing is a city surrounded by mountains, crossed by rivers. Because of its unique location, in the distant past, it was tough to develop industries. However, Chongqing had new opportunities by the end of the 19th century due to its convenient water transportation conditions. Industry and business vigorously developed. During the war of resistance, Nationalist Government, many institutions, and research institutes in Northern China and Southeastern Coastland moved to the west, like Chongqing. Therefore, Chongqing was the center of economy, politics, and even culture at that time.

Chongqing Iron and Steel Company, one of the economic supports at that time, contributed significantly to the war. Located in Dadukou District, the steel plant contributed 90% of steel output for the war, including military weapons and production materials.

With the development of modern society, the company moved to another district, the old factory in Dadukou went back to silence. It was listed as one of the major historical and cultural sites protected at the national level of China in 2013.

A new museum comes from the old factory

According to data, the steel company had 15,699 workers in its heyday, contributing 90% of steel materials for military production during the war of resistance. 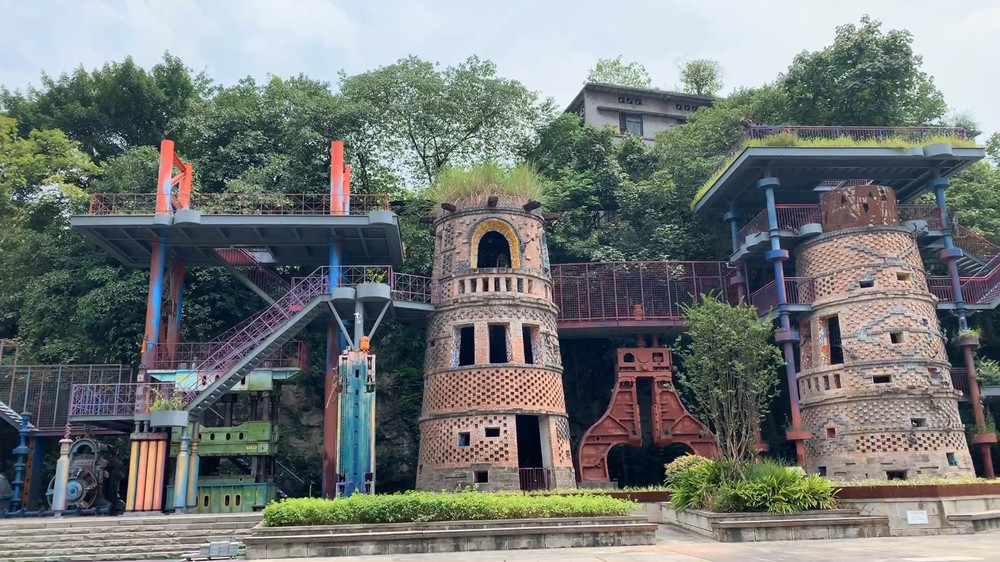 To protect the old site and spread the history and culture, the city decided to open a museum where the old factory had been. It became the Chongqing Industrial Culture Expo Park. The industrial park will present a profound center for history and culture to the public, after being established almost 80 years ago.

However, how to repair it? It was a challenge for the related departments.

The construction team tried to keep the original environment of the factory, based on the safe construction, including some traces of damage to leave the sense of history. For example, they kept a brick wall, which was built in the 1970s. Its color and texture are different from when it was first built but full of the atmosphere of the time. 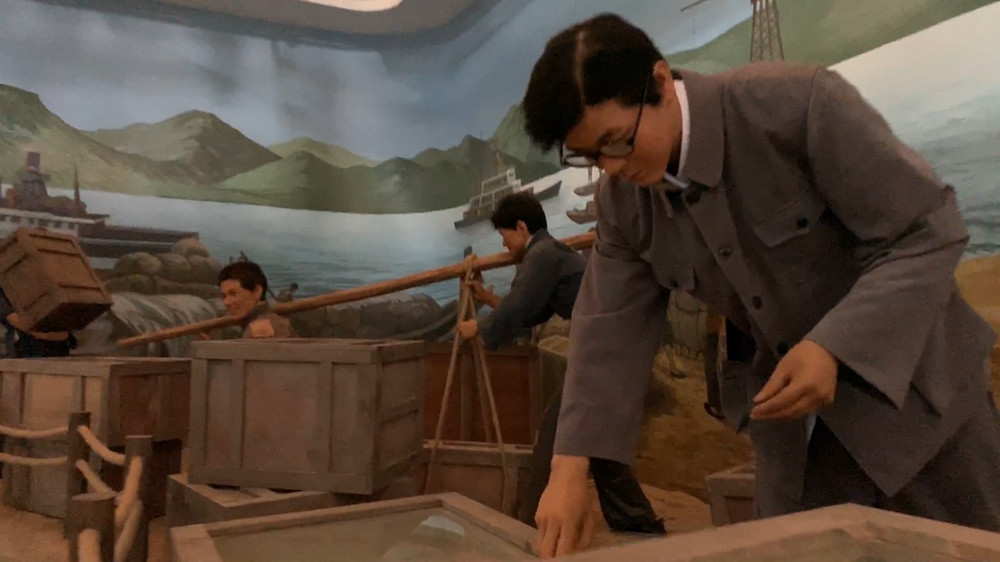 The worker model inside the main exhibition hall, Steel Spirit

There are three parts, presenting four different major types of exhibitions inside the industrial park – real things, like production facilities or productions, archives and documents, images, and videos.

Named as Steel Spirit, the old plant was renovated as the primary exhibition hall, presenting the history of its development and some essential components. There are two numbers on a large wall of relief sculpture – 1938 and 1945. These two numbers are symbols of the whole park, which represent the seven years’ history of the factory.

With the change of Chongqing’s industry, traditional industries declined gradually, so protecting the history and culture here is becoming more and more important. It will keep old memories here and pass on culture to the next generation. 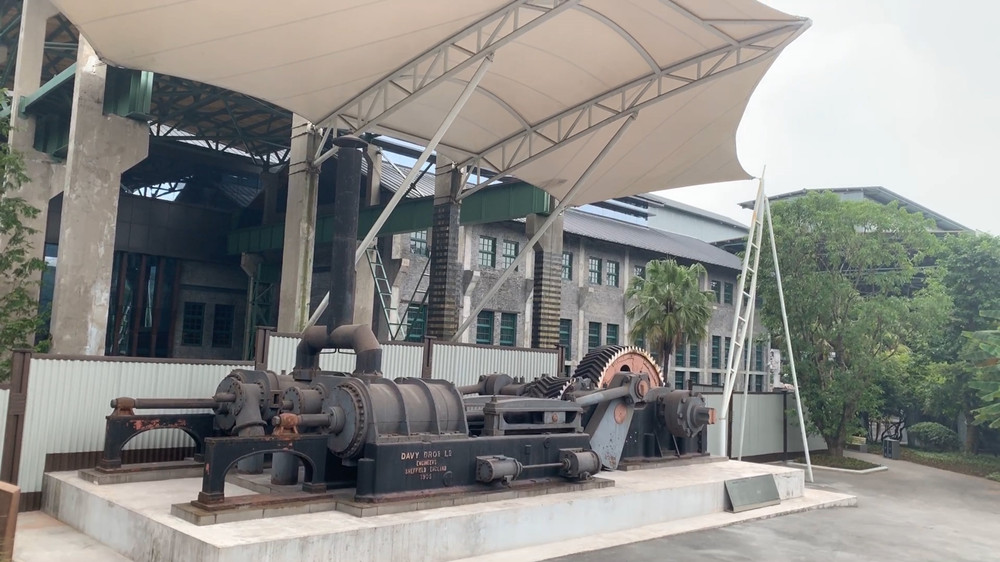 The horizontal steam engine with double cylinders, which is 8,000 horsepower

The treasure of the industrial park is a horizontal steam engine with double cylinders, which is 8,000 horsepower. It was made in England in 1906. It has 6 meters length and 2 meters height, with 250 tons of weight. After 32 years, it arrived in Chongqing. Since it went through the war of resistance, some crucial parts were severely damaged when arriving here. Twelve years later, Mao declared the founding of the People’s Republic of China on October 1, 1949. Our county decided to repair this machine, and put it into the construction of materials for a new railway – it is Chengdu-Chongqing Railway. 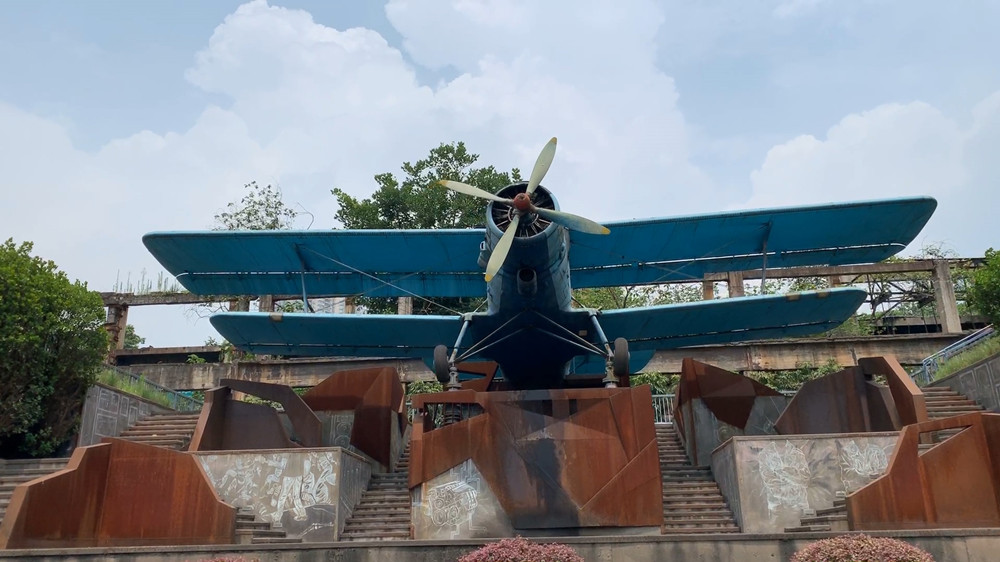 There is the first generation multi-functional airplane inside the park, donated by Chongqing Three Gorges General Airline Company. It is evidence of the development of the Chinese aviation industry. People here used it to send people and to transport machines and materials.

The park keeps several major old machines from the past since they have witnessed the development of steel manufacture in modern China.