Map of the tourism spots with romantic legends in Chongging

Chongqing – On August 7, China meets Qixi for this year. It is a traditional Chinese festival to celebrate the annual meeting of the Cowherd and the Weaver Girl. Qixi is Chinese Valentine’s Day, falling on the July 7 of the Chinese lunar calendar.

This is the map of love stories in Chongqing

In Chongqing, there are also many places with love stories or legends, attracting tourists to visit there. Now, follow iChongqing, let’s go and explore these beautiful and touching stories.

After The Bridges of Madison County was known around the world, the covered bridge becomes a symbol of love. In Qianjiang, there is a famous covered bridge which witnesses lots of romantic stories. Meanwhile, it is also the number 1 covered bridge or gallery bridge in the world.

Located nearby Zhuoshui Ancient Town, on the A’peng River lies a rainbow-like covered bridge. It can keep out wind and rain for locals, a sort of shelter. With the unique architectural design of Tujia, it has advanced technologies of bridge-building. 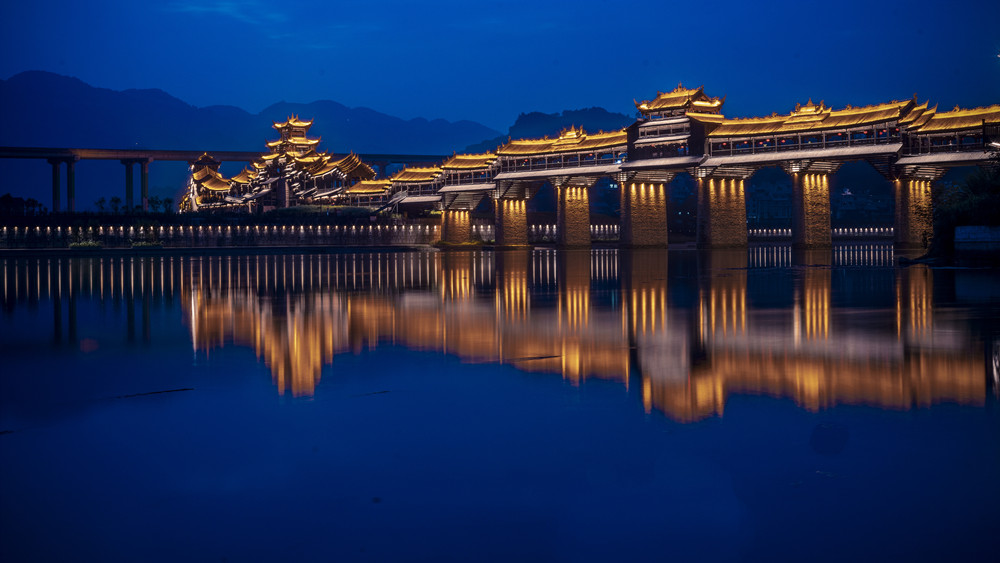 The amazing bridge at night

Every Qixi, many single boys and girls will come to this bridge to encounter their Mr. or Miss Right.

In Simian Mountain Scenic Sport, there is one of, perhaps the most legendary sites in the park are the steps to heaven. More than 6000 steps carved into the mountain by Liu Guojiang for his wife, Xu Chaoqing. Xu was a widower, who fell in love with Liu Guojiang despite being ten years older than him. At the time, in the 1950s, this was considered immoral and unacceptable, and to escape the prying eyes of the villagers, Liu took his love hidden in the mountain. But because the hill is very steep, Liu stared carving the steps for the safety of Xu. The steps to heaven are also now referred to as the Chines Love Ladder.

More than 6000 steps carved into the mountain by Liu Guojiang

As the story goes, a boy was kicked out of his home by his elder brother and his wife. Afterward, the boy met a girl and married her. Her name was Rhododendron, and she brought him lots of rare flowers to plant on the mountain. 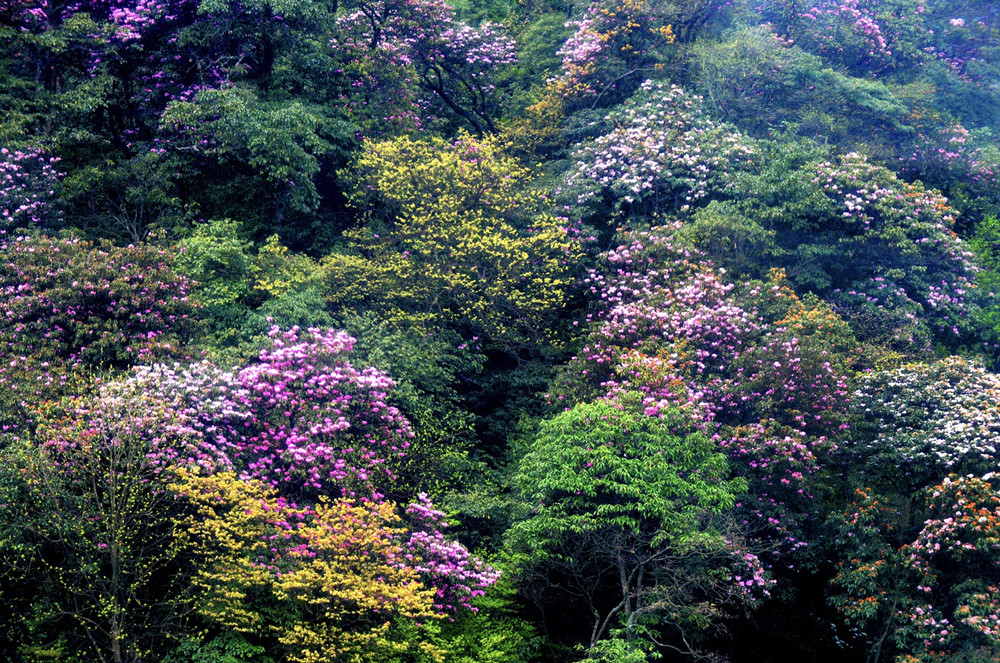 Until now, when the mountain is full of the fragrance of rhododendron, visitors can hear songs of birds in Jinfo Mountain.

In Bayue Mountain, Tongliang District, there is one ancient Huangjue tree, which is amazing and romantic. It looks like two people embracing together and fused together.

From the legend, a monk in Bayue Temple there, Hui Ming, fell in love with a pilgrim girl, Miss Guo and swore to marry to her. However, Guo’s mother strongly opposed them. She pointed to two trees under the mountain, and said, “you could only marry my daughter if those two trees became one.”

Hui Ming prayed day and night in front of those trees. His love moved the god so that two trees fused together, forming an archway there. It was called Haungjue Gate, as the symbol of love.

In Wulong District, a couple of mountains lie there, staring in each other. But how did the couples mountains form?

According to the legend, Prince Charming, Ao Chaofeng, met with a fairy with a green dress, Zhang Tianyang. They fell in love with each other, but The Queen Mother of the West punished them with a heaven ruler because they violated the rules of heaven. 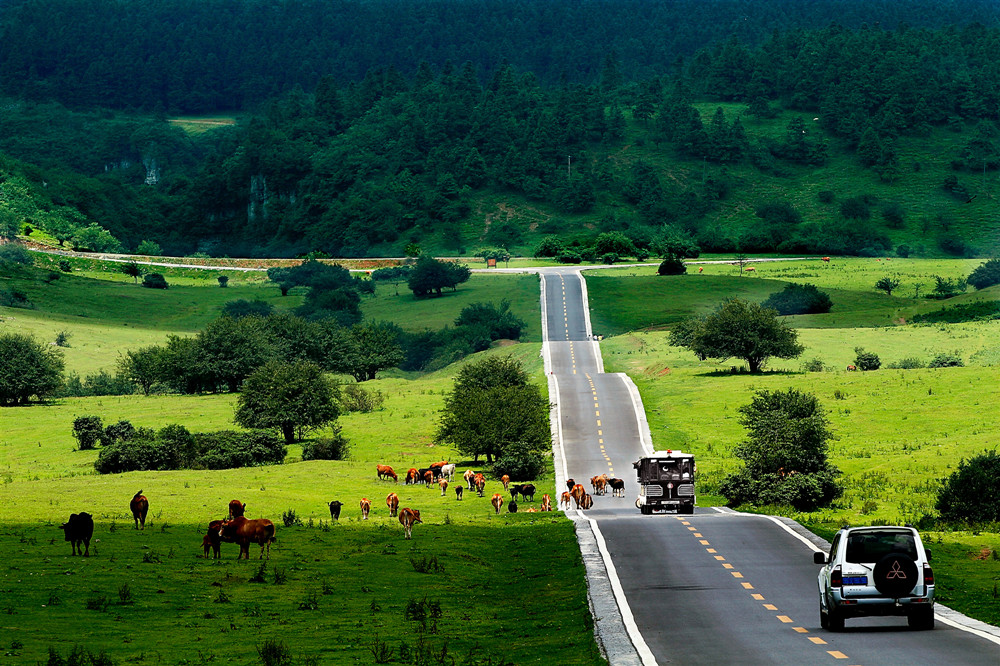 Nonetheless, the heaven ruler fell in the mountain, becoming a river. The river separated Ao Chaofeng and Zhang Tianyang, therefore. After a really long time later, they became two mountains – Fairy Mountain and Baima Mountain (which means the mountain of prince charming).

Fairy Mountain is a piece of green

Fairy Mountain and Baima Mountain became couples mountains. Besides, lots of people come here to express their love for their mate.

Address: Shuanghe Village, Wulong District (most visitors choose Fairy Mountain as the destination, and you can also enjoy viewings of Baima Mountain there)

In Wushan County, there are 12 peaks there, of which the Goddess Peak is the most beautiful and magnificent one, with all red maple leaves in autumn. When fog arrives here, Goddess Peak will be hidden in fog, looking mysterious and enchanting. 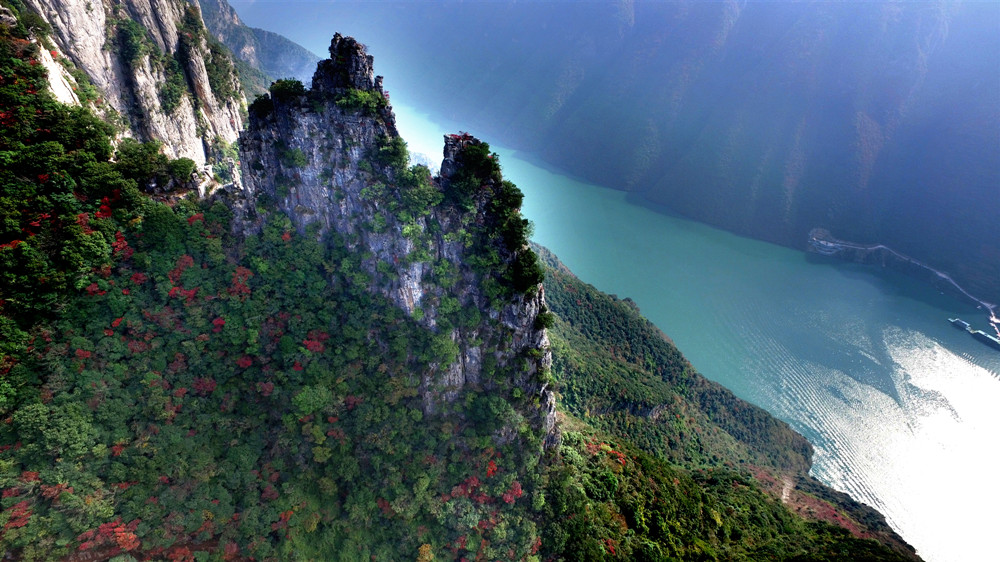 The goddess there is Yao Ji, the daughter of Yan Emperor. However, she died very young and became a fairy grass, Yao Cao, on the mountain. Yan Emperor loved her daughter so much, so he praised Yao Ji as the goddess of cloud and rain of Wushan Mountain.

At the end of Warring States period, King Huai of Chu (328 – 299 B.C.) arrived at Gao Tang in Wushan. Once, he had a nap in the afternoon, and he fell in love with Yao Ji. After he woke up, he missed the goddess so much that he established a temple for her, named Goddess Temple.

Maybe you are not very familiar to Hong’an Ancient Town, but most people know about the Border Town of Shen Congwen. This novel regarded Hong’ an Ancient Town as the base, and the miserable love story that happened in the book is here.

The Border Town in Hong’an Ancient Town in Xiushan

Although the story is from the book, there is still a ferry at the wharf. The difference is that Cuicui is not there waiting for her boy. Moreover, we cannot listen to her songs in the valley.

Located at the junction of Chongqing, Guizhou, and Hunan, Hong’ an Ancient Town integrates features of three places. This is a perfect place for you to relax and comfort yourself, listening to love stories from the old generation by ferry. 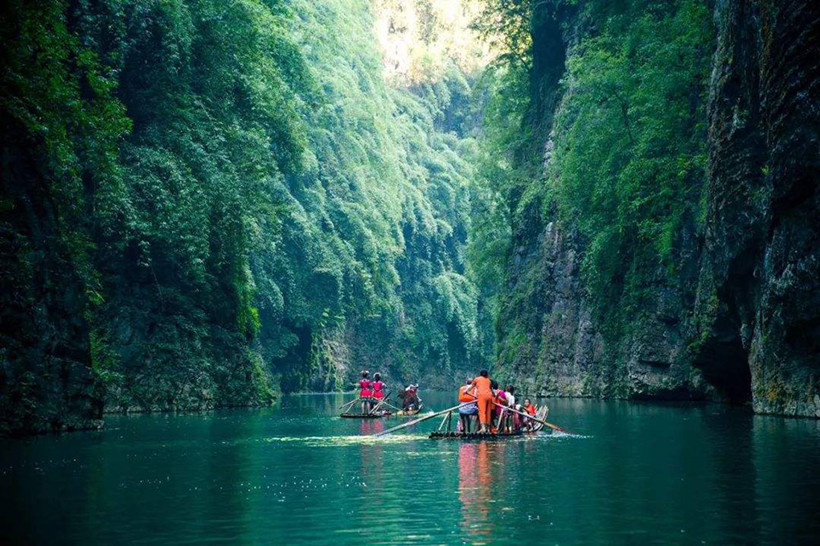 The gallery records 108 love letters from all over the world with different background culture from a different era. These letters present their happy or miserable stories of love to visitors, encouraging people to find the confidence and courage of love.

Besides, you can also leave your story there.