Chongqing — “The Chinese medical team has been providing humanitarian medical services to Papua New Guinea for 16 years,” said Chinese President Xi Jinping during his first state visit to the country in November 2018.

The Chinese medical team is from Chongqing. Entrusted by the central government, Chongqing has been sending the Chinese Medical Aid Team to Papua New Guinea independently since 2002.

On the one-year anniversary of Xi’s visit to PNG, Chongqing sends the tenth medical aid team to PNG. The medical exchange and cooperation between China and the South Pacific Region are also into the tenth time cycle, CQNEWS and Post Courier, the mainstream media of PNG, jointly launched a special report, “CQ Doctors’ Foreign Aid Diaries”.

What happened to the medical team? Let’s take a look at their foreign aid diaries.

“Although it was hard in PNG, we gained a lot from it.” On November 9, Dr. Zhang Jinsong took a break in his office in the Department of Oral and Maxillofacial Surgery of the First Affiliated Hospital of Chongqing Medical University. He recalled his times of providing medical aid in Papua New Guinea to us.

The group photo of the seventh medical team in Papua New Guinea.

In 2002, as the first Chinese medical aid team to PNG, Zhang and the other nine doctors arrived at Port Moresby General Hospital. The medical team was organized independently by the government of Chongqing and would stay at the hospital for two years.

“I still think of the shock we had when we first arrived in PNG,” said Zhang. They had a high incidence of oral cancer, but they didn’t have any oral surgeons. The infrastructure for stomatology there was almost none. The only dental professional they had was Dr. Apaio, who was still earning his master’s degree in oral surgery.

A week later, Zhang set a goal for himself: to establish a Department of Stomatology at Port Moresby General Hospital, training local oral surgeons, and leaving a team specialized in oral medication for the locals.

“When I just got there, Dr. Apaio said to me, ‘you can count on me from now on.'” Even though Dr. Apaio did not trust Zhang at the moment, Zhang believed this situation would change very soon because surgeons always believe that ‘skills tell the truth.’

Zhang was right. A 19-year-old female patient came in. She had suffered from facial asymmetry with multiple failed treatments for 15 years. Zhang not only provided her conventional treatment but also patiently offered her psychological counseling, helping her to ease the mental burden over the years. She was able to regain confidence gradually.

Later, under the leadership of Zhang, the department completed the first radical operation for an oral cancer patient in PNG. “Right after getting off the table, Apaio said, ‘I’ll count on you from now on,” Zhang recounted. As a result, Zhang began to teach Apaio systematically regarding oral surgery. “From oral anatomy to systematic theories, diagnosis, and house-checking, I taught him everything,” Zhang said. Two years later, by the time he returned from his mission in PNG, the oral maxillofacial surgery team at Port Moresby General Hospital had taken shape.
Thanks to Zhang, Apaio successfully finished graduate school and grew to be the first oral surgeon in PNG. 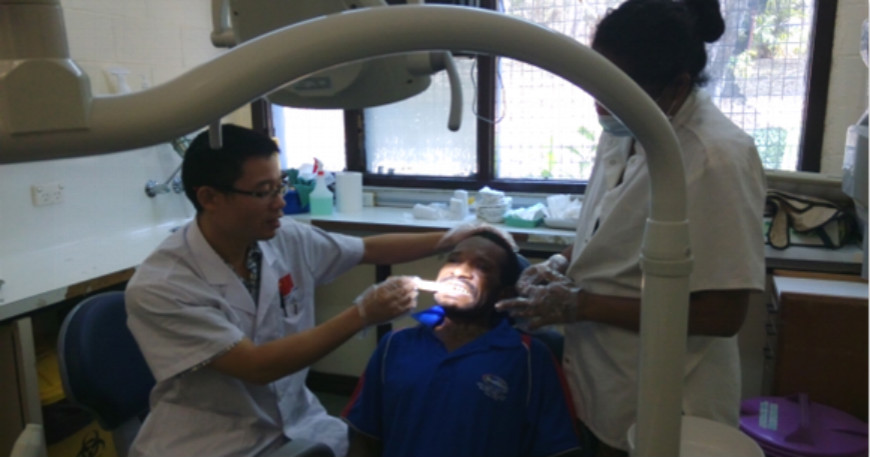 In 2015, Zhang was assigned to practice medical aid in PNG for the second time. Because he had experienced PNG before, Zhang was named the captain of the seventh medical aid team to PNG.
“It was not easy for me, facing all kinds of critical conditions in PNG and teammates having difficulties adapting, so I was under a lot of pressure,” Zhang said, “I was even more unprepared for dengue viruses, which used to be far away from us in China, were hidden closely around us here.”

PNG is an epidemic area of AIDS, tuberculosis, malaria, dengue fever, and typhoid. Different types of dengue virus cross spread, resulting in surprisingly high morbidity of dengue fever in PNG.
Although the medical team took many precautions, they got caught by the disease. On May 6, 2016, He Shengjiang, vice-captain of the medical team and an orthopedic expert, was infected with dengue fever; on the same day, Deng Hongbin, a medical oncologist, was down; by 8 pm, Zhang also showed symptoms of infection.

At this point, the medical team panicked, asking for Zhang’sZhang’s instruction for the next step. “Healthy ones continue working. Sick ones, we take care of each other!” Zhang made a rigid requirement immediately.

“I remember that we had 18 steps from the first floor to the second floor in our post. I didn’t pay attention before, but when I was sick, every small step was every difficult to climb.” Said Zhang. Suffering from high fever, Zhang had to drag his body, climbing slowly to infuse for sick ones upstairs.

For nearly three weeks, Zhang fought against dengue fever with his teammates. Sick ones infused medicine and got drugs for each other. They finally beat it.

Among ten members of the medical team, seven had been infected with dengue fever, and three who had not been infected had been providing medical services at the hospital.

“This experience made me feel that in PNG, we were surrounded by dangers. As their captain, I had to protect my teammates better,” Zhang said. “PNG is full of memories, and foreign aid is the one thing that I’ll be proud of for my whole life!”