Chongqing- At 9 am on December 2nd, the second “Asia-Europe Cooperation Dialogue” of the Boao Forum for Asia opened in Chongqing. More than 400 guests from the political, business, and academy from 21 countries and regions, and 3 international organizations attended the meeting. Participants will focus on topics such as the integration of the “Belt and Road” initiative with European development strategies, the background, and challenges of financial globalization, the Internet of Things (IoT) Engineering and smart cities, and conduct special discussions to propose innovative ideas and solutions for Asia-Europe cooperation. 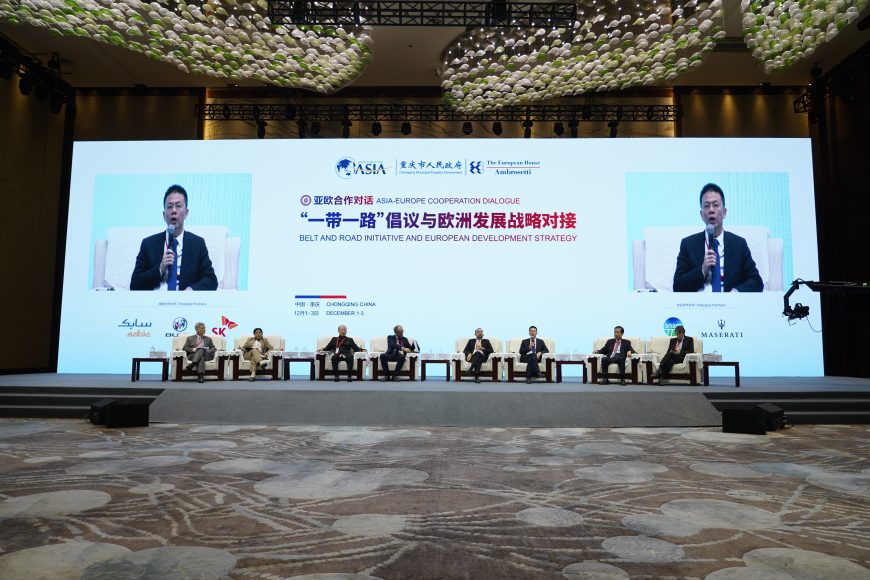 the second “Asia-Europe Cooperation Dialogue” of the Boao Forum for Asia opened in Chongqing.

The “Asia-Europe Cooperation Dialogue” was co-sponsored by the Boao Forum for Asia and the European Consulting Union and is committed to promoting comprehensive, in-depth and high-quality cooperation between the two continents of Asia and Europe. The second dialogue was held in Chongqing with great significance.

As a staunch supporter and defender of globalization, free trade, multilateralism, and an open world economy, the Boao Forum for Asia has always been committed to opposing protectionism and unilateralism. There are series of international conferences held in French, Italy, Philippines, Cambodia, Laos, Mongolia, Vietnam, Japan, Saudi Arabia, and the United Arab Emirates to maximize the consensus and be the action of multilateralism and international cooperation. This Asia-Europe cooperation dialogue is exactly a Bo`ao Action.

It is understood that more than 400 guests from the political, business and academic experts attended the second “Asia-Europe Cooperation Dialogue” of the Boao Forum from Japan, Singapore, South Korea, the Philippines, Indonesia, Saudi Arabia, New Zealand, the United States, France, Germany, Italy, Switzerland, Spain, etc. there are 21 countries including Hungary, Finland, Portugal, and 3 international organizations including the United Nations, OECD, and EU.

On the event, Ban Ki-moon, Chairman of the Boao Forum for Asia, the eighth Secretary-General of the United Nations; Zhou Xiaochuan, Deputy Chairman of Bo`ao Forum for Asia, Vice Chairman of the 12th CPPCC National Committee, Former President of the People’s Bank of China; Esko Ajo, Former Finnish Prime Minister; Chen Feng, Chairman of HNA Group and other distinguished guests will focus on issues such as the integration of the “Belt and Road” initiative with European development strategies, the prospects and challenges of financial globalization, the Internet of Things, and smart cities for discussion.