Chinese military medical experts demonstrate how to disinfect before taking off the protective suit at a hospital in Yangon, Myanmar, on Thursday. Medical experts from the Chinese People’s Liberation Army provided training to Myanmar’s military medical staff, who will be assigned to work at a COVID-19 treatment center soon. [U AUNG/XINHUA]

Xinhua reported that the Chinese mainland reported 14 new COVID-19 infections on Saturday, with two being imported cases, according to the latest updated data from the National Health Commission. Northeastern China’s Jilin province and Central China’s Hubei province reported the other 12 locally transmitted cases, the commission said, adding that one new suspected case, which was imported, was also reported on Saturday in North China’s Inner Mongolia autonomous region.

The new infections have brought the tally of confirmed cases to 82,901 on the Chinese mainland, with 1,683 confirmed imported cases. Also on Saturday, 74 patients were discharged from hospitals, and 427 people were released from medical observation. By the end of Saturday, the Chinese mainland had seen 78,120 discharged from hospitals and 4,633 deaths.

A worker checks the quality of lenses of medical protective goggles at a factory of a company in Helong, Yanbian Korean Autonomous Prefecture, northeast China’s Jilin Province, May 6, 2020(Xinhua/Xu Chang)

A Chinese health official said Sunday effective personal protection measures should be maintained to guard against the novel coronavirus. A total of 14 new confirmed COVID-19 cases were reported on the mainland Saturday, of which 12 were domestically transmitted cases, including 11 in northeast China’s Jilin Province.

The cluster infection cases are a reminder that people should always stay alert and step up personal protection against the virus, said Mi Feng, spokesperson for the National Health Commission, at a press conference. Mi called on people to try to avoid social gatherings and to seek medical advice or testing in designated hospitals if they exhibit symptoms such as fever, cough or fatigue.

China leads in battle against pandemic

China has been at the forefront of the global fight against the COVID-19 outbreak, sharing its experiences, expertise, and donating supplies and equipment to countries around the world. on May 5, Singapore received a total of 620,000 face masks donated by the Chinese government and the Red Cross Society of China to help the city-state manage the outbreak. COVID-19 infections had risen to 23,336 in Singapore as of May 10, the highest in Southeast Asia. On May 4, China donated about 270,000 Fijian dollars ($119,780) in medical supplies to Fiji. The donation came after an earlier donation of $300,000 to Fiji from China.

In Japan, the nationwide state of emergency has been extended until the end of May due to the continuous rise in new COVID-19 infections. As of April 28, the Chinese government, friendship organizations and enterprises have donated tens of millions of pieces of medical supplies, including masks and protective gear, as well as testing equipment and kits, according to the Chinese embassy in Japan.

On May 4, a new consignment of donations, including medical equipment, reagents, and consumables, was donated to a newly built military hospital laboratory in Myanmar. The lab was also set up with the help of a Chinese medical team, according to Xinhua News Agency.

China has provided medical supplies to more than 150 countries and international organizations by mid-April, the Chinese Foreign Ministry said earlier. 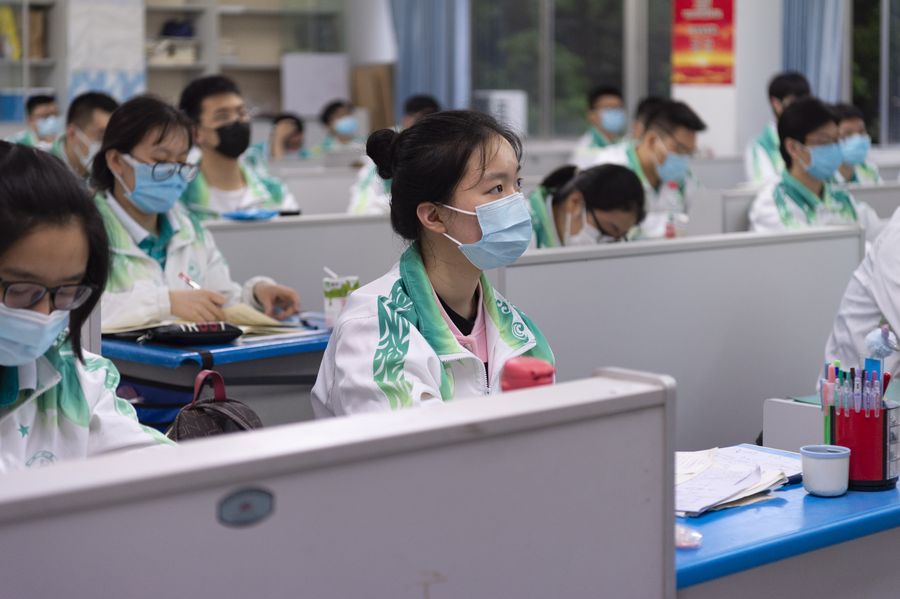 Senior students at No. 4 High School of Xiangyang take a class in Xiangyang City, central China’s Hubei Province, on May 7, 2020. (Xinhua/Xie Jianfei)

The largely satisfactory response from Chinese citizens in the survey reflects public confidence in the leadership of the Communist Party of China (CPC) which puts people’s life and health first, China’s socialist system and its governance system.