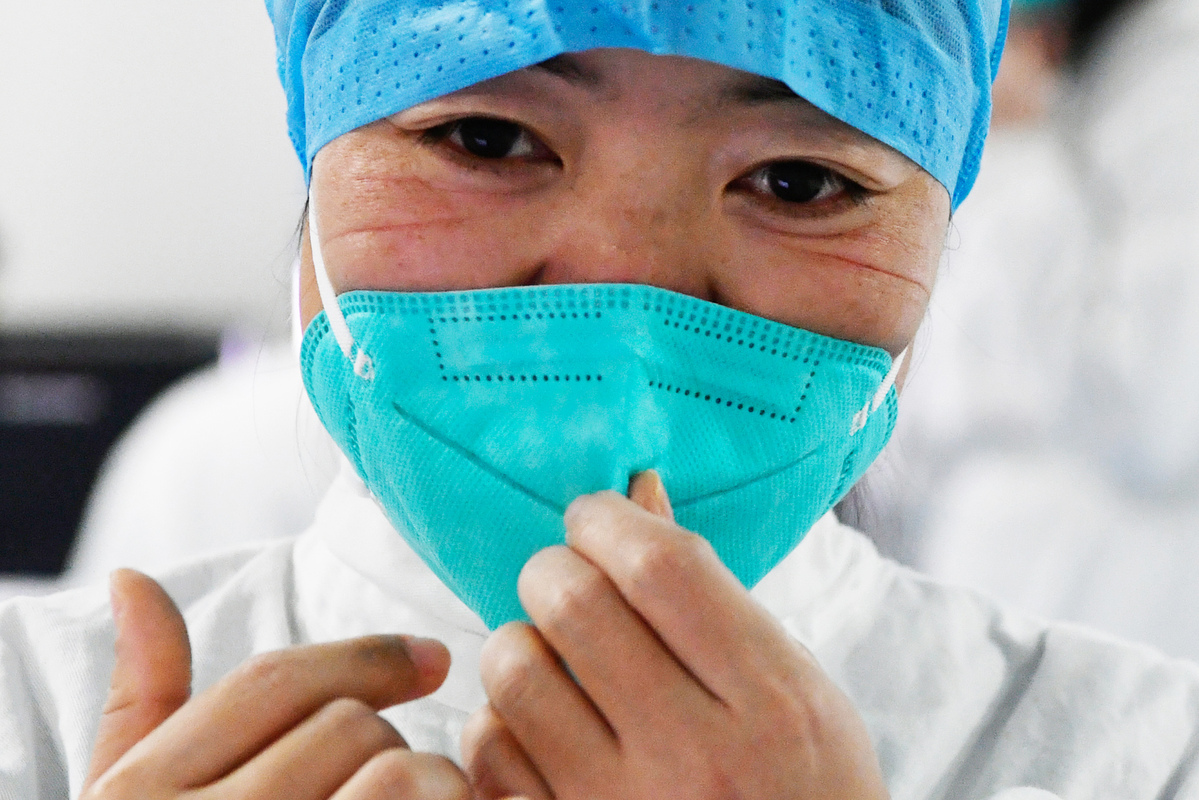 Marks caused by the mask are seen on the face of a nurse at the Fuzhou Pulmonary Hospital in Fuzhou, Fujian province, Jan 31, 2020. [Photo/Xinhua]

President Xi Jinping encouraged the country’s nurses on Monday to make new contributions to promote the building of the Healthy China initiative and maintain the security of global public health. In greetings sent to nurses across the country ahead of International Nurses Day on Tuesday, Xi complimented the nurses for their brave fight against the novel coronavirus disease both in China and overseas.

Nurses have made significant contributions to disease prevention and control, and they have demonstrated the great spirit of respecting lives, saving patients, being dedicated to giving of themselves and showing great love for others across borders, Xi said.

More than 28,600 nurses have been sent to the front lines of disease prevention and control since the COVID-19 outbreak, according to the National Health Commission. Noting that nursing is an important part of health services, Xi instructed Party committees and governments at all levels to care for nurses.

He stressed the importance of strengthening the building of nurse teams and improving mechanisms to help excellent nurses to remain focused on their careers. Society as a whole should understand and support nurses, he added.

The president said that he hoped nurses would uphold good traditions, develop their humanitarian spirit and make further efforts for the health of the Chinese people and the public health of the world.

International Nurses Day, which falls on May 12, was established in 1974 by the International Council of Nurses to commemorate the birth in 1820 of Florence Nightingale, the founder of modern nursing. 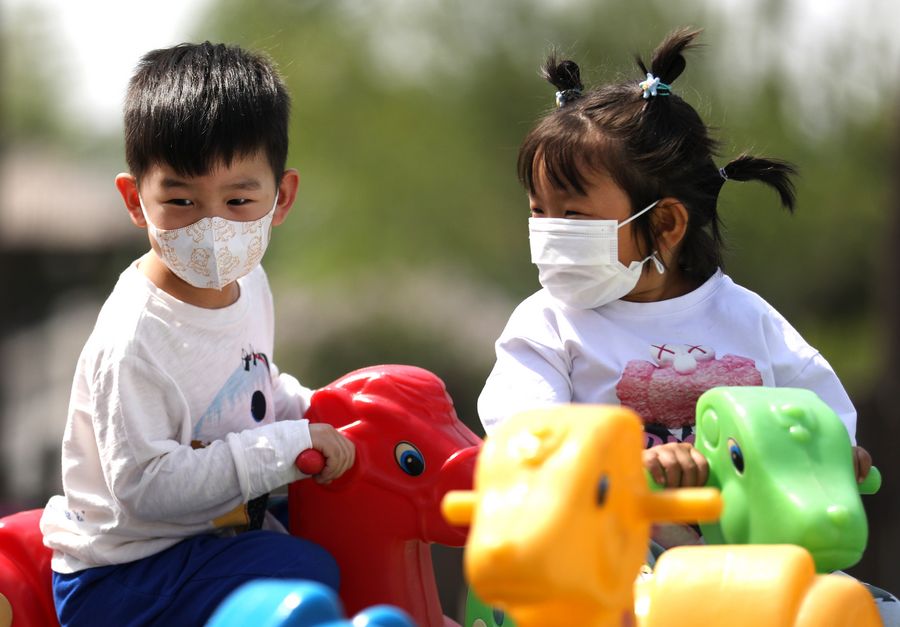 Children play at a resort during the International Labor Day holiday in Anshan, northeast China’s Liaoning Province, May 2, 2020. (Xinhua/Yao Jianfeng)

Chinese health authority said Monday that it received reports of 17 new confirmed COVID-19 cases on the Chinese mainland Sunday, of which seven were imported cases reported in the Inner Mongolia Autonomous Region. Ten cases were domestically transmitted, with five reported in Hubei Province, three in Jilin Province, one in Liaoning Province, and one in Heilongjiang Province, the National Health Commission said in a daily report. No new suspected cases or deaths were reported Sunday on the mainland, according to the commission.

On Sunday, 24 people were discharged from hospitals after recovery, while the number of severe cases decreased by four to nine. As of Sunday, the overall confirmed cases on the mainland had reached 82,918, including 141 patients who were still being treated, and 78,144 people who had been discharged after recovery. Altogether 4,633 people had died of the disease, the commission said.

By Sunday, the mainland had reported a total of 1,690 imported cases. Of the cases, 1,591 had been discharged from hospitals after recovery, and 99 remained hospitalized with three in severe conditions. No deaths from the imported cases had been reported. The commission said three people, all from overseas, were still suspected of being infected with the virus. According to the commission, 5,501 close contacts were still under medical observation after 678 people were discharged from medical observation Sunday.

A total of 982 patients in Hong Kong, 41 in Macao, and 366 in Taiwan had been discharged from hospitals after recovery. 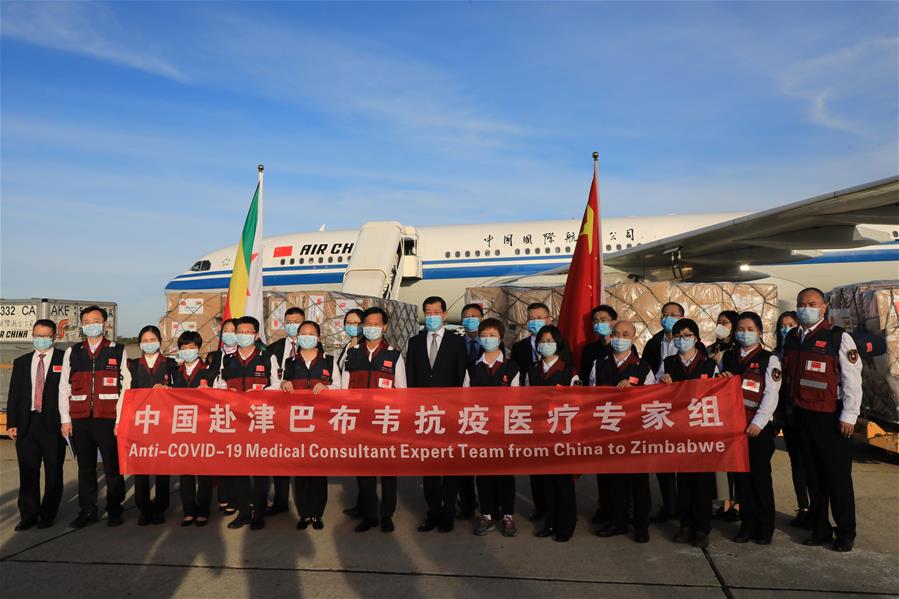 Chinese medical team members and Chinese Ambassador to Zimbabwe Guo Shaochun (C) pose for a photo at Robert Mugabe International Airport in Harare, Zimbabwe, on May 11, 2020. A Chinese medical team arrived in Zimbabwe on Monday to assist the southern African country’s efforts in the fight against COVID-19. (Photo by Wanda/Xinhua)

The team includes experts from respiratory departments, infectious disease departments, and the fields of intensive medicine, traditional Chinese medicine, infection control, public health and nursing. They will share experience in epidemic control with the Zimbabwean side and offer training for medics on the prevention, control, diagnosis and treatment of COVID-19.

Deputy Minister of Health and Child Care John Mangwiro said the exchange of ideas between Zimbabwean and Chinese experts will go a long way in combating the spread of COVID-19.

“Their coming in in-person, physically to be with us, with cross-pollination, where we were making mistakes we can now be able to ask them directly. So the human factor is extremely important because now we interface, correct each other, talk medically and we can be able to do all these things,” he said.