A Farmer in Chongqing Gets Rid of Poverty by Raising Chickens

In the early morning of May 14, Wang Yuanliang, filed as a low-income farmer in Liangqiao Village, Yubei District, Chongqing, received a phone call from a customer who wanted to buy 23 chickens raised by him in the forest and asked him to send the chickens to the city after they were slaughtered that day.

“In the last month or two, I have earned nearly RMB 10,000 by selling chickens, and this year’s income is estimated to be about RMB 100,000,” Wang said shyly, adding “a poor man cannot be poor in ambition and one can get rich by working hard.” 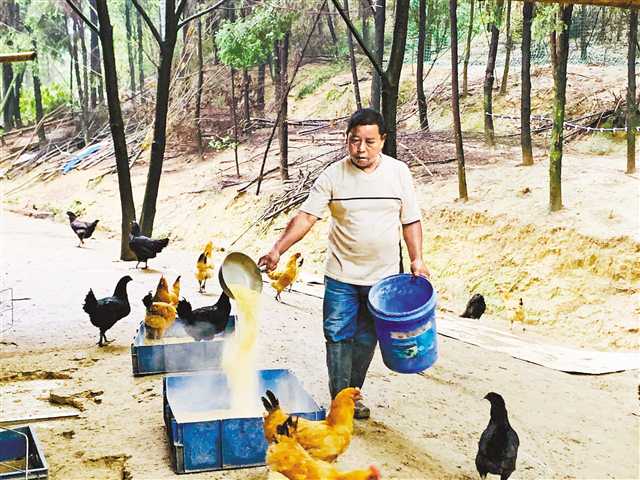 Wang Yuanliang is feeding chickens on the mountain. Photo by Tang Yanjuan.

Falling into poverty because of illnesses

Wang suffered from severe pneumonia, so he could not work in cities to earn money. In the past, his income from farming was not enough for him to see a doctor and buy medicine. In 2016, he was filed as a low-income farmer.

“For a single man like Wang Yuanliang, he just needs to feed himself,” Wu Jianquan, head of Liangqiao Village, said, “although he is not lazy, he has little pressure and lacks the will to lift himself out of poverty.”

“In helping him get rid of poverty, the starting point for local cadres is to stimulate his internal motivation,” said Tan Wanhong, deputy head of Mu’er Town. Based on this, whenever the town held a briefing to introduce models getting rid of poverty, the government would invite Wang Yuanliang to be present, hoping that he could get inspired to rely on his own hands to get rid of poverty and become better off.

At the same time, the local government helped Wang apply for applying for the D-level renovation project of dilapidated houses, helping him to move into a new 80-square-meter house by the Village Road at the end of 2017. Later, the government installed running water in his house, paved his courtyard with concrete, and bought targeted anti-poverty insurance and cooperative medical insurance for him.

Getting rid of poverty

“I really didn’t expect that. I used to listen to other people’s example as an audience, and then I came on stage and told my own story in getting out of poverty,” Wang said. In November 2019, Wang took the stage to report the training activity with the theme “I Work Hard · I Get Rich” held in Mu’er Town, and became a model for more than 40 poverty-stricken farmers in the town.

To ensure the quality of the chickens, Wang insisted on feeding the chickens with corn and other green feed, raising each chicken for more than half a year, and designating different areas for chickens with varying times of raising.

At present, Liangqiao Village has no cold chain, logistics, express delivery, and other supporting services; Wang also has no car to deliver products, so, how does he transport his chickens?

Wang said he has regular customers due to the quality of his chickens, so he doesn’t worry about selling channels. After the customer place group orders by telephone and WeChat, he will slaughter the chickens and entrust warm-hearted friends and relatives to help send the chickens to the city.

“The selling of the chickens has not been affected by the current COVID-19 outbreak, and sales are even better than usual at this time of year. This year, my net income will be no less than RMB 40,000,” said Wang. Recently, the chickens have sold well. “Now that I have savings by working hard, I’m thinking about getting married,” Wang said.