In 15 Years, Rail Transit Becomes Part of the Dailylife of Chongqing People

On June 18, 2005, the section of Chongqing Rail Transit Line 2 from Jiaochangkou to the Zoo was put into trial operation, which marked that Chongqing had officially entered the era of rail transit.

Yang Jie, one of the first generation working for Chongqing Rail Transit and the person who drove the first train of it.

On the afternoon of June 15, our reporter came to the Dayan Base for Chongqing Light Rail of Monorail Line 2 to interview Yang Jie, who was in charge of safety management there. Although the 34-year-old Yang Jie no longer engages in the driving of monorail trains, his job is still related to driving – conducting training about driving safety. 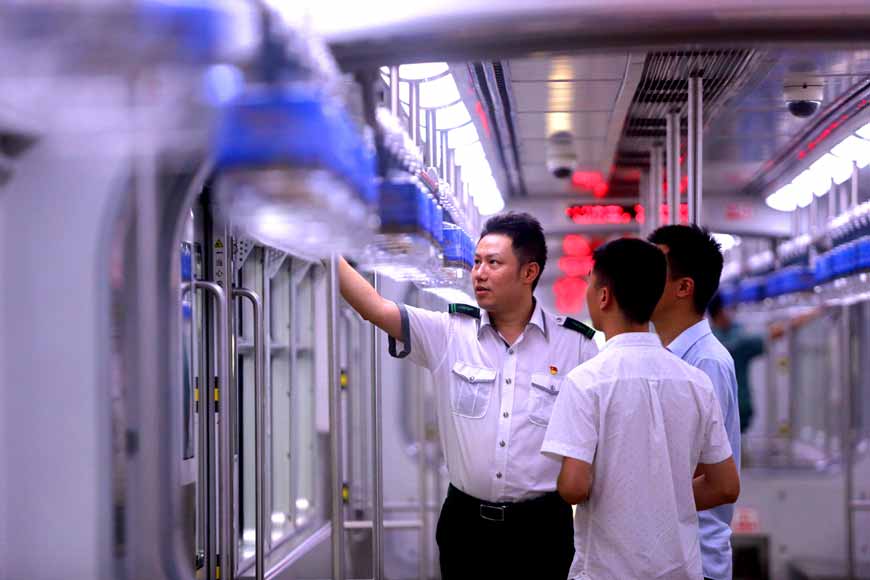 Yang Jie is checking the security of the train with colleagues.

Fifteen years later, when talking about his experience of driving the first train, Yang said the scenes then were still vivid in his mind.

Yang Jie started his career in Chongqing Rail Transit (Group) Co., Ltd. in August 2004. Before then, he received two-year driving training as a trainee in Shanghai. After returning to Chongqing, he participated in the debugging work and the training related to technical expertise before the operational trial of Line 2.

“Before the operation of Line 2, people mainly commuted by bus and taxi,” said Yang Jie, adding that at that time, it often took people more than one hour to go from the Zoo to Jiaochangkou by bus and probably more time during morning and evening rush hours.

“With rail transit, the time needed is cut by more than a half. That is, it takes only more than 20 minutes for the journey,” Yang told us.

On the day of the trial operation of Line 2, Yang Jie was lucky to be the driver of the first train of Chongqing Rail Transit, for which Yang Jie was excited, a little nervous and very proud, as he thought he could take the passengers to have a different view of Chongqing from a different “perspective.” Before departure at the first station of the line – the Zoo, people waited in long queues outside the doors. When the train was about to depart, there were few empty seats on the train.

As Chongqing Rail Transit Line 2 was the first urban rail transit line in western China, Chongqing citizens were full of expectation and curiosity about it. The majority of passengers at that time found rail transit novel and exciting.

Today, rail transit has been one of the most common ways to commute and the preferred means of transportation in the daily life of Chongqing citizens, as well as the best way for tourists to experience the charm of this “tridimensional city.”

“Rail transit has become a highlight of Chongqing tourism, and I have been fortunate enough to see its development.” Besides Yang Jie, his two-year-old daughter has also witnessed those moments about the rail transit in Chongqing. “Every time she sees the train of Line 2, she is thrilled because she knows I once worked there,” said Yang Jie.

He also told us that when her daughter grew a little older, he would tell her his story of driving the first train.