How are Overseas Flights to Chongqing Inspected During the Pandemic?

How are overseas flights to Chongqing inspected under the regular epidemic prevention and control? Recently, the reporter visited the airport to explore how policemen work on frontier inspection.

At noon, a plane of Hainan Airlines from Frankfurt to Chongqing slowly landed at Terminal 3 of Chongqing Jiangbei International Airport and docked at the designated stand.

Four policemen for frontier inspection dressed in insulating clothing and reflective vests, who had been waiting on the parking apron for a long time, promptly branched out into two columns and went to the flight warehouse and the cabin, respectively. The reporter followed them. 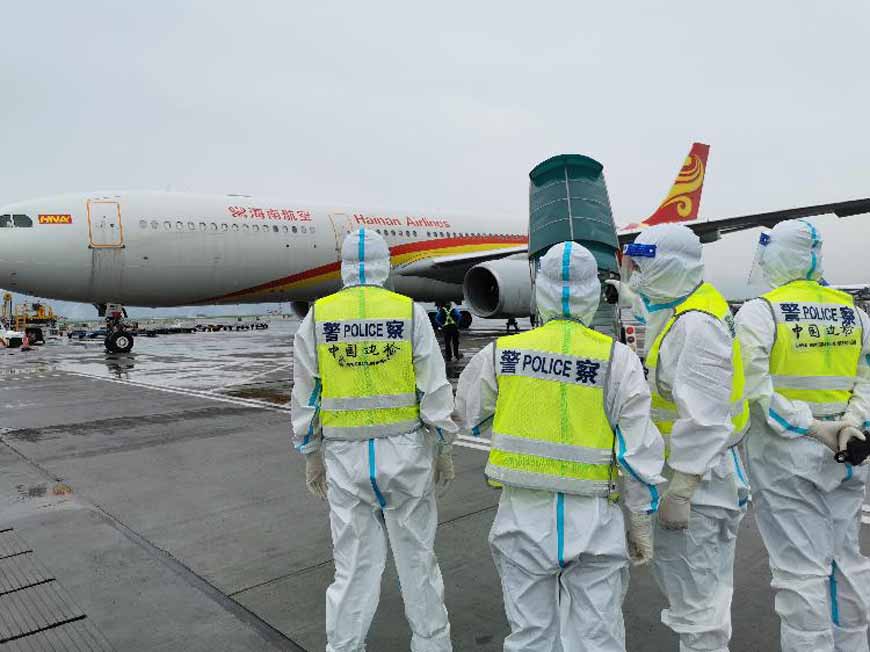 Four policemen for frontier inspection dressed in insulating clothing and reflective vests were waiting on the parking apron.

Wang Qing, the political instructor of the second team on duty at the Chongqing General Station of Exit and Entry Frontier Inspection, and his two colleagues were assigned to carry out the inspection task of this flight.

To go through the entry formalities for the flight as soon as it landed, Wang Qing and his colleagues began to wear insulating clothing in the preparation room at 11:30 a.m. that morning, when the reporter put on the insulating clothing together with them. This flight was the first plane that Wang Qing needed to inspect that day. There were no passengers on the flight, only crew members. As there was much less passenger flow than before during the pandemic, many airlines have changed their passenger planes to cargo aircraft.

Wang Qing and his two colleagues would inspect the cabin, warehouse, and cab, respectively, to ensure that there were no stowaways and other illegal immigrants.

“The COVID-19 situation abroad is grim, and some countries lack medical resources, which has increased the possibility of illegal immigration to China.” Wang Qing said that the consequences would be unbearable in case that the illegal immigrants who carry COVID-19 enter into the country.

When every crew member walked out of the cabin door, Wang Qing asked him/her to take off his/her mask and verify the information with his/her passport. After all crew members got off the plane, Wang Qing and his colleagues rechecked the cabin.

They were busy with these works for a long time. After half an hour, although the weather is cool, the reporter has felt drained and got sweaty in this heat.

“Aha, just get used to it. It’s a fine day today. If it’s sunny, it will get much worse.” In sharp contrast to the reporter who is lack of energy, Wang Qing looks relaxed.

Wang Qing told the reporter that on average, he would check eight airplanes a day and wear the isolation gown for more than five hours. If it were a passenger plane, he would check the identity information and itineraries of inbound passengers one by one. It would take two to three hours to complete the check of a flight.

Since the outbreak of the epidemic, many flights have brought back anti-epidemic materials from abroad. After the arrival of the plane, they need to immediately go through the entry formalities for the flight to minimize the clearance time. Therefore, they have to wait on the apron before the arrival of the aircraft.

Sometimes, the temperature of the apron was at least 35℃. Exposed to the scorching sun for less than 5 minutes, they were sweating a lot every time. “What I have learned from the experience is that don’t drink much water before wearing the isolation gown, but drink a small glass of saline water, so that you won’t run out of your strength too much,” said Wang Qing.

Since the outbreak of the epidemic, Wang Qing led the police of the second team on duty to successively check more than 20,000 inbound and outbound passengers, more than 80 freight flights, more than 800 suspected infected passengers screened by big data, and adequately cared for 320 suspected feverish passengers, which built a solid barrier to prevent the epidemic and protect life at the entry of the country.