“In the past over two years, we have made a package of remarkable achievements together with Liangjiang New Area,” remarked Mr. Paolo Bazzoni, Chairman of CICC.

The achievements include the first overseas agent investment invitation platform, 20-plus market matchmaking events, and communication visits of more than 120 Italian enterprises to Liangjiang New Area. Among them, the Sofima filter project, with a total investment of 20 million euros, was officially put into operation in June 2019 in the plant in Yufu Industrial Development Zone of Liangjiang New Area. After being expanded, the project covers a total area of over 17,000 square meters, of which nearly 14,000 square meters will be used for high-tech filtration system production. The project marks a milestone for CICC’s successful investment in Liangjiang’s key industries. 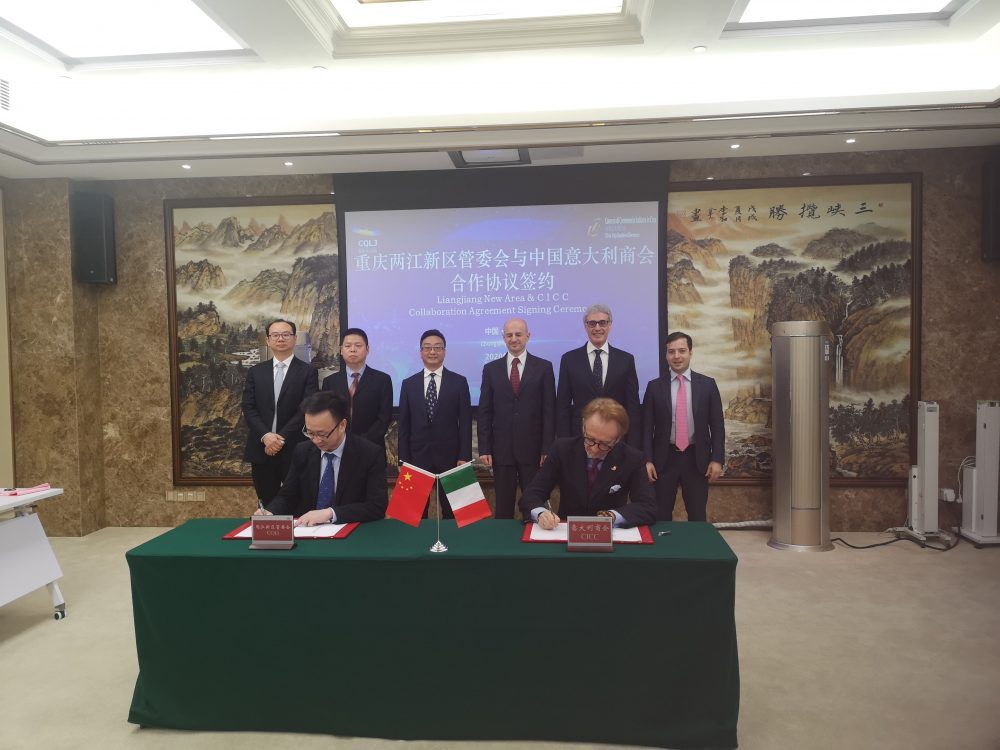 The signing of this agreement provides new opportunities for Italian enterprises interested in investing in Chongqing Liangjiang New Area.

“It has greatly streamlined the process and shortened the time of communication, and accelerated the implementation of policies, cutting considerable manpower and material costs for enterprises,” Zhao added that due to the internationalized business environment in Liangjiang New Area, English is frequently used in communication between government and enterprises, which has greatly facilitated the direct, accurate communication of foreign-invested enterprises and their executives with Chinese administrations.

For the same reason, the COVID-19 outbreak did not slow down the pace of Italian enterprises entering Liangjiang New Area.

In March this year, Modula China Automation Equipment Co., Ltd., a company mainly engaged in the R&D, production and sales of automated warehousing equipment, was located in Liangjiang New Area.

Since the beginning of 2020, the building of the Chengdu-Chongqing economic circle and the development of Chongqing’s “one area and two clusters” strategy have endowed Liangjiang New Area with a new mission: to build an opening-up portal in inland China and a smart city in Chongqing.

Such a trend has also attracted more Italian enterprises to invest in western China and Liangjiang New Area.

A large number of world-class enterprises have settled in Liangjiang New Area, which has further boosted Liangjiang’s economy and expanded the market, thus becoming a more and more attractive foreign investment destination.

This has been proved by data.

The pouring in of foreign investment is improving Liangjiang’s modern industrial system, as well as attracting domestic capitals to move westward to Liangjiang.

5G technology, an important part of the new infrastructure, has been under trial, planning, and deployment in advance in Liangjiang.

Inspur, another information technology giant, also has a great interest in investing in Liangjiang.

As one pioneer in China’s IT industry, Inspur is mainly engaged in four industrial clusters, namely, cloud data center, cloud service big data, smart city and intelligent enterprise, and provides IT products and services to more than 120 countries and regions around the world, comprehensively meeting the informatization needs of governments and enterprises. As early as 2015, Inspur has located its data center in Liangjiang New Area.

Pang Songtao, Vice President of Inspur Group, said that the reasons for Inspur to choose to make a key strategic layout in Liangjiang lie in two aspects. The first is Liangjiang’s industrial advantages and foundation. Liangjiang pools strengths to build a high-end, high-quality, and high-tech modern industrial cluster represented by the two hundred-billion-yuan industries of electronic information and automobile, which has strong core competitiveness and highly matches Inspur’s strategic positioning.

The second is that since Inspur’s entering, Liangjiang has provided Inspur with a series of sound investment policies, improved the legal system and management system to ensure that they are in line with international standards, and given strong support to the introduction of high-end talent, high-tech projects and high-quality technologies. In addition, Liangjiang has helped Inspur to conduct technical discussion and demand matchmaking with upstream and downstream enterprises of the industrial chain and provided comprehensive support from the aspects of policies, resources, and ecology, according to Inspur’s a development planning and business advantages.

A number of Fortune Global 500 enterprises or leading enterprises, including Tencent, Huawei, and Suning, have contracted with Liangjiang New Area for investment, creating increasingly obvious driving effect through their leading projects.

In 2019 alone, 88 projects in the directly administered area were contracted, with a total contracted investment of RMB 171.623 billion, ranking first among Chongqing’s all districts and counties. Liangjiang New Area has realized regular investment invitation with contracts signed almost every week.