Chongqing- On June 24th, Banan District held a Chinese Dragon Boat Festival-themed event, the seventh in the series of Laowai @Chongqing, where between the months of May and July, foreigners residents are invited to experience local intangible culture heritage, and also witness the accomplishments in poverty alleviation. 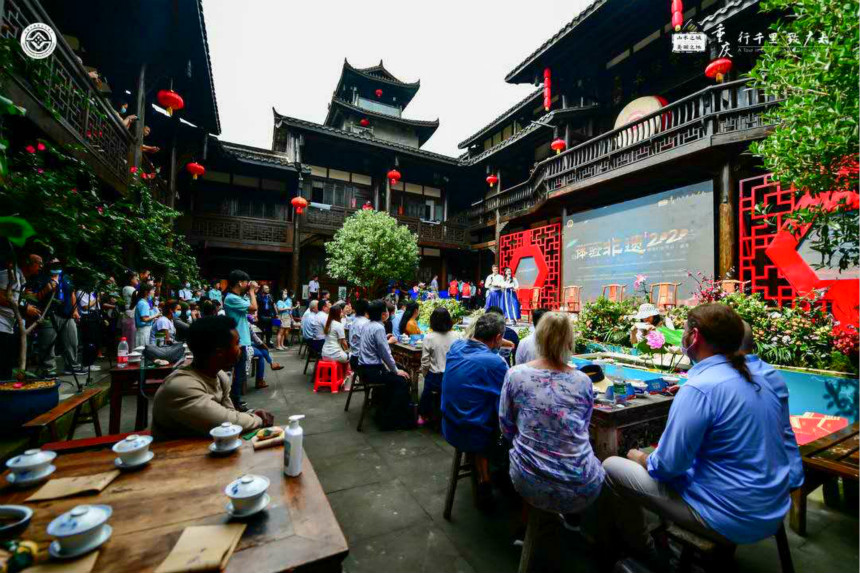 In brief, the Dragon Boat Festival is held on the fifth day of the fifth month, according to the Chinese lunar calendar. The tradition dates back to the third century BC, when a Chu State politician, aristocrat, and poet named Qu Yuan was exiled following a Qin State plot to frame him.

When the Chu State was defeated in 278BC, Qu Yuan threw himself into the Miluo River out of sadness for his homeland. He was so admired that locals threw food and wine into the river, hoping the fish and mythical river dragons wouldn’t consume his flesh. 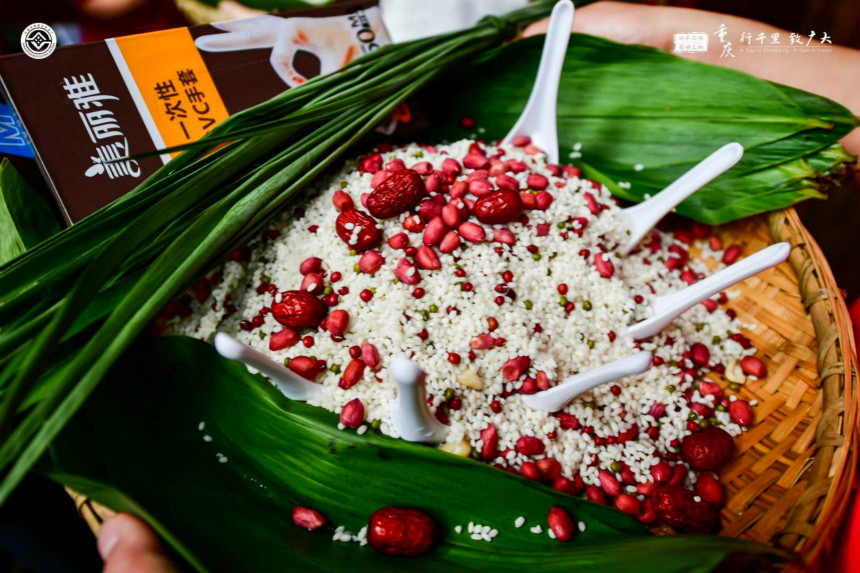 A highlight of the Dragon Boat event was the zongzi making contest where participants tried to wrap as many as possible within five minutes.

Dignitaries from the consulates of Japan, Cambodia, Denmark, and Uruguay were in attendance, as well as many overseas students from Russia, Central Asia, and Africa.

Following a performance of traditional song and dance between Chinese and overseas students, the main highlight was a communal zongzi wrapping competition. Once a lady with three decades of experience had demonstrated the basics, everyone present wrapped as many zongzi as they could within five minutes. The winners were judged based on shape, creativity, and quantity. 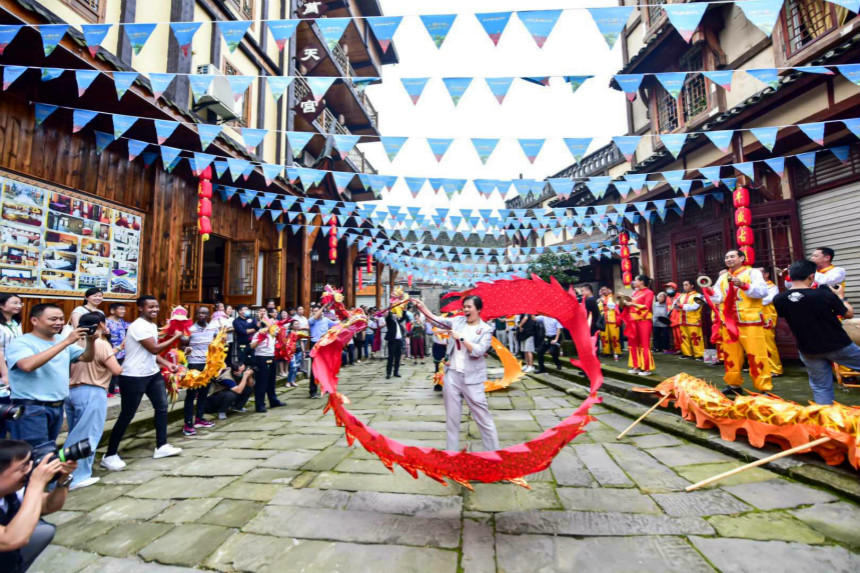 The stage event was followed by a tour through Fengsheng Ancient Town where participants enjoyed traditional street performances.

When the courtyard event reached its conclusion, the overseas guests were led on a tour through the streets of Fengsheng, where they could sample the local specialties before watching an outdoor dragon performance.

There was still much on the itinerary once the event in Fengsheng ended. Laowai @Chongqing took the guests to a picturesque country manor by the name of ‘Colour Forest,’ where after a hearty banquet, they were invited to write diary entries of their experiences that day, while the remaining time was spent admiring the grounds, as well as the expansive views over the beautiful Banan countryside.

Last on the day’s schedule was a large pick your own farm tucked between the roadside and foot of a local mountain ridge. All the participants were given a basket to fill with ripe tomatoes inside a huge greenhouse. 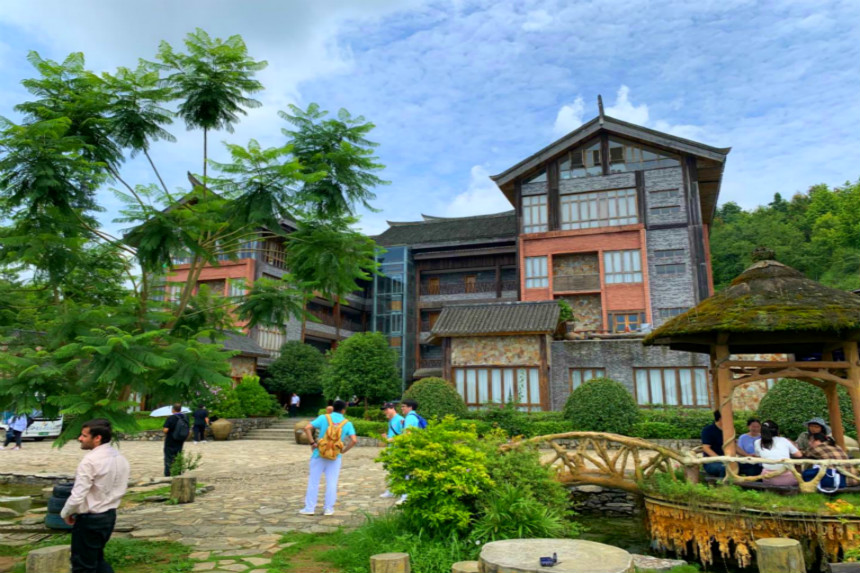 The morning Dragon Boat event was followed by a stay at the ‘Colour Forest’ country resort.

Following another group souvenir photograph, the overseas guests boarded the fleet of minibusses for their trip back into Chongqing. It had been yet another great day out, with a rich variety of activities, events, and hospitality.

Hamza, a civil engineering student from Pakistan commented,’The event was very good, and we enjoyed it a lot. Been in Chongqing one and a half years. Chongqing is an amazing city, and I really enjoy experiencing the culture this way.’

Mahali, a student from Lesotho described the event, ‘It was really cool, lively, and the performances were great. I’ve been in Chongqing for about a year, and I really enjoy interacting with people here, and also the adventures we go on. The zongzi wasn’t easy to make, but I did manage three.’ 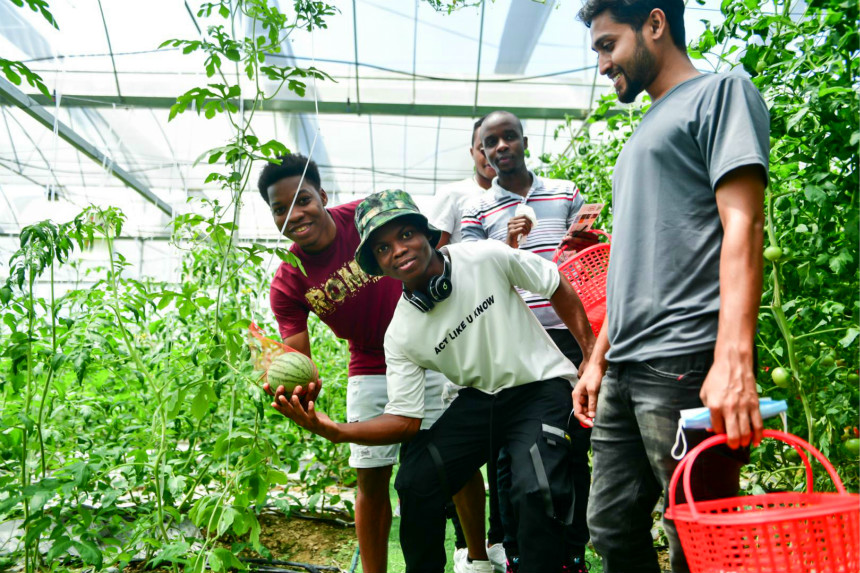 The final experience of the Laowai @Chongqing day trip was at a pick your own farm in the picturesque Banan countryside.

Kevin Agossou, a student of the Mandarin language from Benin has been in Chongqing for about seven months. He commented, ‘The event was great, and I’m really happy I attended. We took part in the zongzi contest, saw the dragon street performance. It was the first time I’ve tried making zongzi, but I did make a few despite it being quite tricky. I also really love life in Chongqing, the spicy food, and wonderful countryside.’

Vladislav is a Russian student in Chongqing who was been here for four years. He spoke about his experience of the event, ‘It’s been an amazing day. We woke up early to bright sunshine, and it was wonderful to experience the show, dragon performance, and zongzi event. I also love the old architecture, and I’ve never been to such a big farm like this.’ 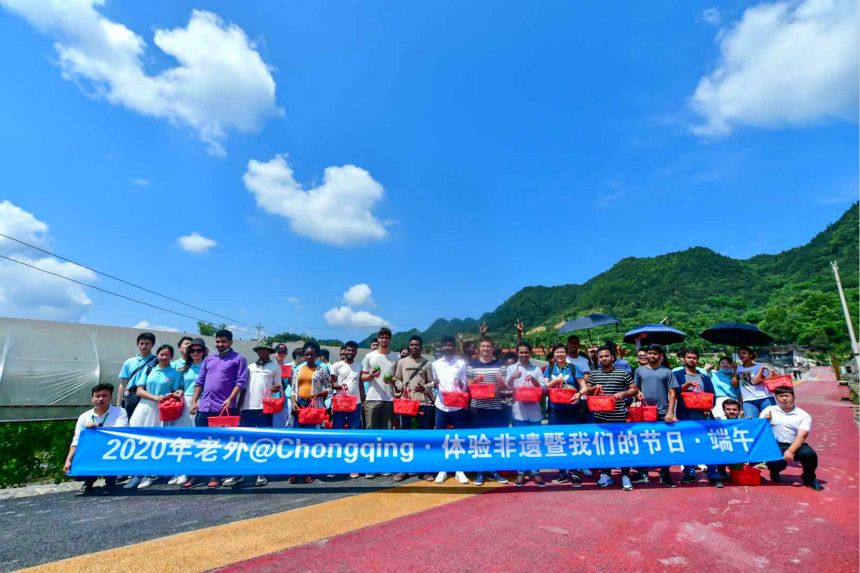 Participants take a group photograph after filling their baskets with fresh tomatoes at a local PYO farm in Banan District.

Below are the proposed dates and locations of upcoming events themed on intangible cultural heritage and rural traditions. There are 20 places available for foreign guests in each event and are free of charge.

Overseas residents interested in attending one or more events may contact Mr. He Liujin at bntqw@126.com, or by telephone 66231839 (English available).