Open Your Heart on a Journey through Magical Youyang

Chongqing- Youyang is a county in southeastern Chongqing and an important gateway to the surrounding provinces. It covers the expansive geographical area and is home to the largest ethnic minority population in Chongqing. 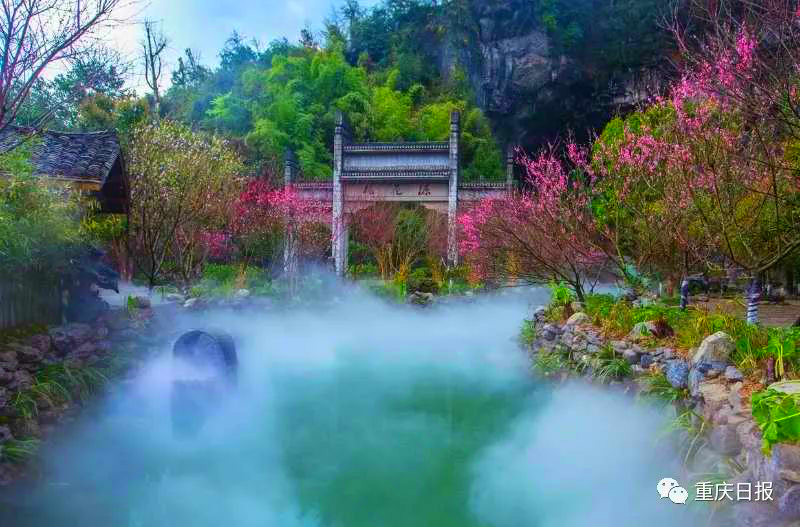 Taohuayuan National Forest Park is among the most famous attractions of Youyang.

In the Youyang Showcase of 2020, there are culturally innovative products and boutique tourist routes that will charm you to the inner core.

Wander the mountain forests among the cloud lines and feel at one with nature at its finest. Youyang has 4.46 million ‘mu’ of forestation, a coverage rate of 63.55%, and the county ranks first in Chongqing for air quality. 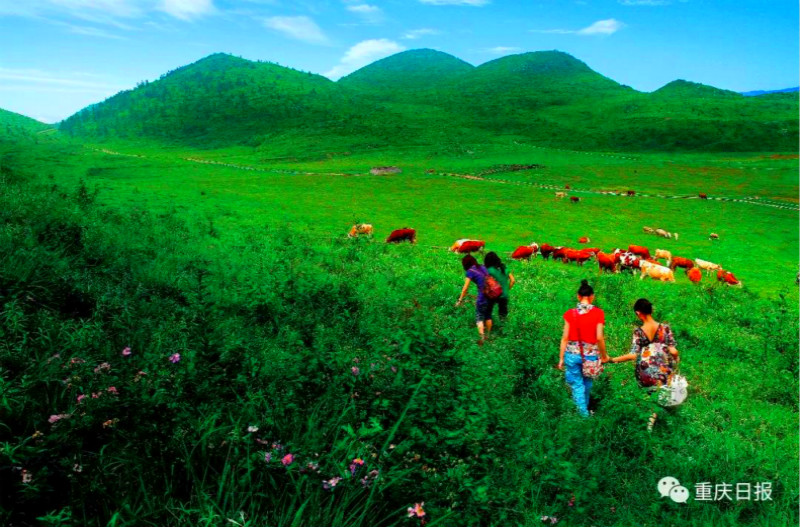 The Changpu Grasslands of Youyang.

There are more than 50 rivers, 225 plant and 206 animal species, including rare and protected varieties such as the giant salamander, yew, sapwood, clouded leopard, red-bellied pheasant, and the white crane.

In the Taohuayuan (Peach Garden) Scenic Area National Forest Park, mist floats in the air above stone paths of rosin, and tourists feel like they’re walking in a fairytale dreamland.

Youyang Taohuayuan is a nationally rated 5A tourist scenic spot with karst caves, stromatolite fossils, deep fissures, and underground rivers formed 300 million years ago. The natural wonders have attracted tourists from all over the world. 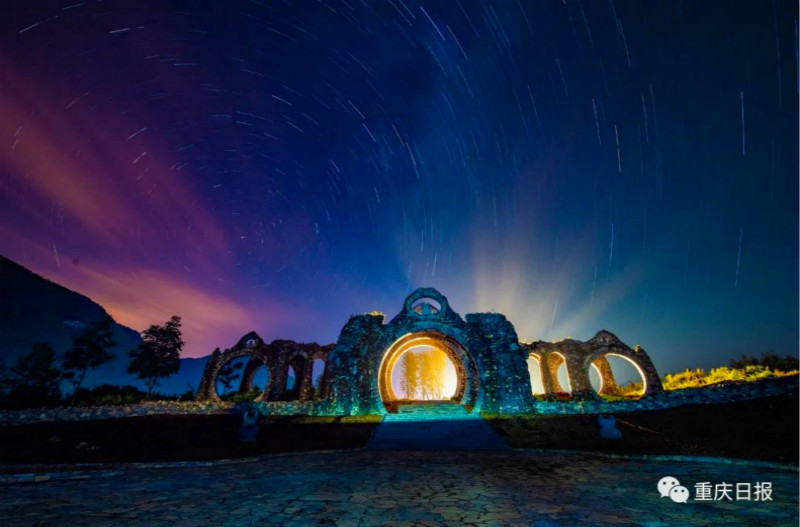 At the foot of Jinyin Mountain, the ancient Taigu Cave was praised by famous geologist Zhu Xuewen as an underground stone forest and wonder of the world. The crystal stalactites in the cave are fascinating and mysterious. They are formed in various shapes and colors that take visitors back thousands of years back into history.

After the wonderland of Taohuayuan, you can visit the Maoba sage mausoleum. It is 1200 meters above sea level, and the highest temperature in summer is 26℃. When you come here, you can drink mountain spring water, try mountain delicacies, light a bonfire, taste authentic country bacon, and local chicken soup. Away from the city hustle and bustle, return to the tranquility of nature, and enjoy the cool air of the mountains.

Adventurous tourists can try the Youyang Dabanying primeval forest. According to expert research, this mysterious destination has the largest forest area and the best-preserved ecological vegetation at the latitude of 28 degrees. This is a rare gene library of animals and plants, hidden away amongst the mountain forests, allowing people to deeply experience the thrills of a wild jungle. 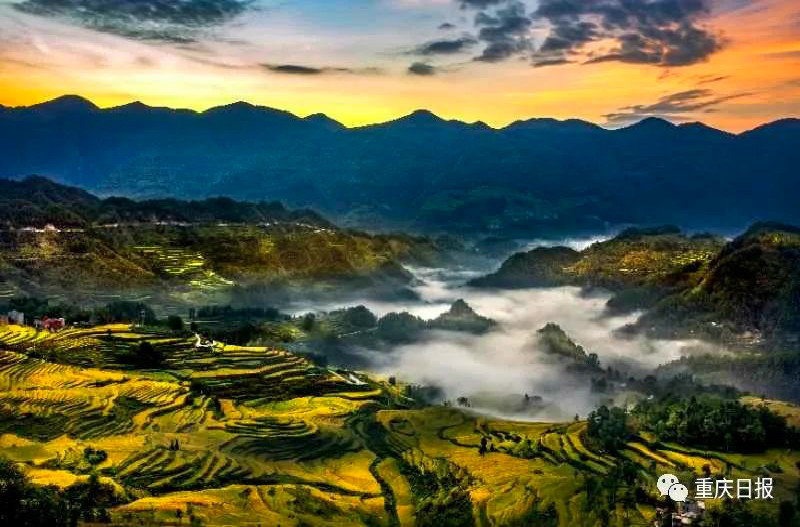 Beautiful scenery lies among the Shenshan Jade Belt, a symbol of the Miao ethnic group. The scenic spot of Shengui Canyon runs along the Apeng River, one of the few rivers in China that flow east to west. Rugged cliffs rise on either bank, and the gorgeous ecology is set against the clear blue river.

The magic of Wuling Mountain is full of surprises. Seas of cloud, starlit nights, unfolding terraces, Linya Hot Springs, and 10,000 acres of grassland. Lanxinggai Scenic Area has an excellent viewing platform, with a 360-degree panorama of flower terraces that gleam beautifully under the sunshine and moonlight. It is also a base for creative photography for enthusiasts.

The pristine ecology nurtures all life, such as the phoebe chinensis that has grown in Youyang for thousands of years, and there are rare clusters in Neikou Village and Liangye Township, with 1,000 phoebe chinensis trees within a kilometer radius. They can grow to a height of over 50 meters, and the trunk needs at least eight adults to form a chain around it. Today, these ancient trees are still thriving, the oldest of which dates back 1500 years. 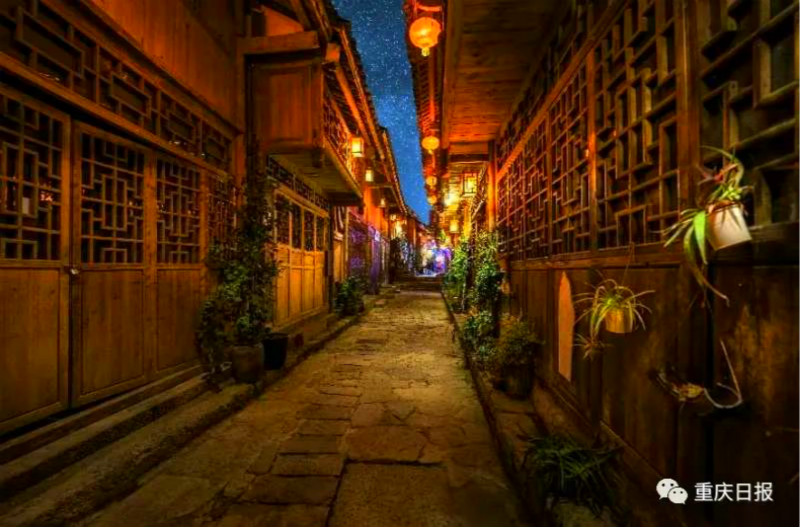 Gongtan Ancient Town is a thousand-year-old historical and cultural location and praised lavishly by the famous Chinese painter Wu Guanzhong. Take a boat trip on the river for a unique perspective of the town, including the stilted buildings set among the picturesque Wu River backdrop.

In the Dieshihua Valley, stromatolite fossils remain from 500 million years ago, as well as cyanobacterial fossils dating back hundreds of millions of years. Here, it is possible to imagine the prehistoric creatures and sense the power of nature and passage of time. 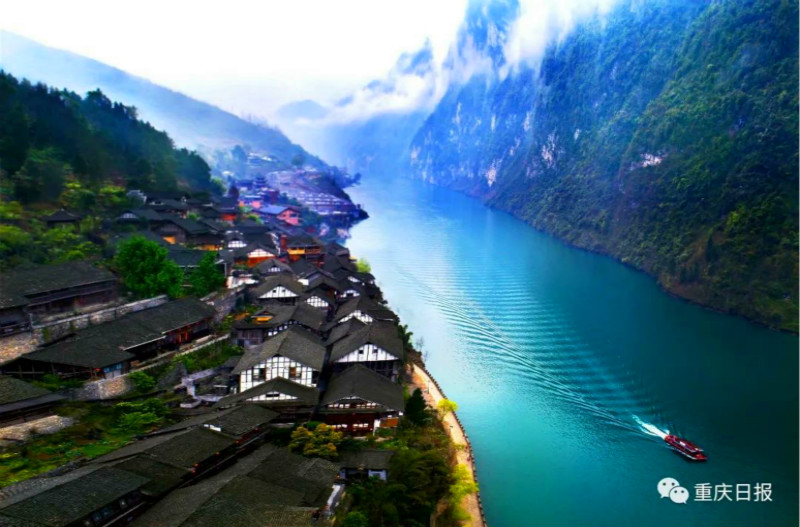 Youyang is the county with the largest population of ethnic minorities in Chongqing and is the home of Tujia Minority hand-dancing, famous folk songs, and the birthplace of Tujia culture.

The famous historical and ancient cultural town of Gongtan was once a busy wharf for salt transportation. Over thousands of years, the ancient town has risen and fallen, yet the buildings have remained intact. The famous painter Wu Guanzhong’s masterpiece “Old Street” was created here. The stilted houses and yards present an ancient imprint of times bygone.

Gongtan has a long history of about 1800 years. In 2019, it was awarded the title of a Chinese historical and cultural town, where the buildings date back to the Ming and Qing dynasties and feature unique Tujia stilted houses, the Xiqin Guild Hall, Ranjia Courtyard, Sanfu Temple, and Yongding Chenggui Monument, all of which are listed as protected cultural relics by Chongqing Municipality.

Shiquan Miao Village, also known as Huoshao Stream, is located in ​​the Apeng River National Wetland Park. This Miao Ethnic Village is home to the largest number of indigenous people and the most completely preserved example in Chongqing. The ancient village is divided into three villages, upper, middle, and lower. There are more than 70 wooden residences in the village, all of whom share the family name of Shi. The ancient village is surrounded by more than 1,000 ancient trees, over 500 hill terraces and mountains full of verdant bamboo. Change into the Miao ethnic costume to feel the culture.

The former residence of Zhao Shiyan, located in Longtan Town, is a national patriotism education demonstration base and a national red tourism classic scenic spot. It was built in the 28th year of Guangxu in the Qing Dynasty (1902). It is a wooden structure courtyard, covering a total area of ​​1,605 square meters. Inscribed by Deng Xiaoping in 1982, the residence was officially opened to the public in November 1983.

Statue of the martyr Zhao Shiyan.

Zhao Shiyan was an outstanding proletarian revolutionist in the early days of the Communist Party of China, an excellent communicator of Marxist theory, a party founder, and a famous worker movement leader.

The Nanyao Revolutionary Base is located in the southwest of Youyang. The Third Red Army Brigade, led by an older generation of proletarian revolutionaries such as He Long and Guan Xiangying, created the Qiandong Special Zone. It is the only Soviet political relic in Chongqing.

Miao embroidery is a municipal recognized intangible cultural heritage. Located in Youyang Miao Village in the depths of the mountain, people like to express their love of life and their surroundings through embroidery. Now, tourists can purchase over 30 products, such as Miao embroidery headdresses, national costumes, and screens.

As early as 640 years ago, people in the hinterland of Wuling Mountain began planting camellia and used traditional squeezing methods to extract tea oil. The oil is suitable for cooking and mixing with cold ingredients. It produces little smoke under heat and is easily absorbed or digested.

Gongmi Rice Planting Base is located in Huatian Township, Youyang County, at an average altitude of 800 meters, which brings a large temperature difference between day and night. The near 10,000 mu of terraced fields has fertile soil and excellent water quality. The rice grains are not only oily, smooth, and evenly sized, but tastes crispy and aromatic.

Youyang is known as the hometown of tartary buckwheat. People are good at making wine, using pure grain as the raw material. It is brewed using traditional techniques such as blended steaming, high temperature, pit fermentation, slow distillation, and storage blending.

The combination of the buckwheat grains and the superb brewing technology has produced the local Youyang Tartary Wine. In 2016, the technique was listed as intangible cultural heritage in Chongqing. 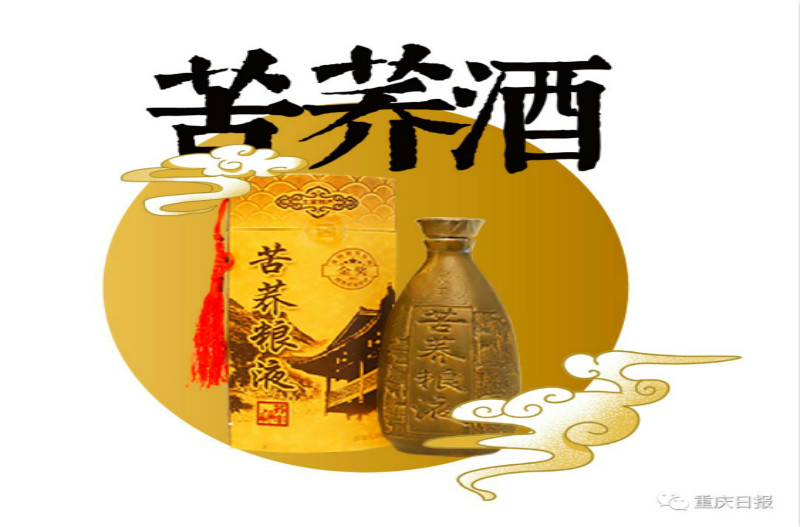