Chongqing – Fengjie County in Chongqing is a place full of wonder and some amazing natural scenery. Fengjie is also the gateway to the three gorges, one of China’s most famous scenic areas.

In this episode of Chongqing Travel Guide, joined by popular YouTuber Barrett, we embarked on an exciting trip to discover fascinating scenic spots in Fengjie County. Additional video clips kindly provided by Lee and Oli Barrett of the Barrett Channel.

White Emperor City, also known as Baidi City, is a favored tourist destination in Chongqing and the gateway to the three gorges. White Emperor City is also the best location from where you can look at Kuimen, the scene at the back of the 10 RMB note. In the far distance, you can see another favored location, the Peak of the Three Gorges.  White Emperor City is situated on a small island, easy to defend from would-be attackers, and historically this is where the Shu Kingdom emperor took shelter during the war in the Three Kingdoms period while entrusting his son to his subordinate Zhu Geliang. A place full of history and stunning views.

The Peak of the Three Gorges

Across the river from Baidi City, at the top of the gorge, we find the Peak of the Three Gorges. This place, praised as an incredible panoramic view of the Yangtze River as it flows into the gorge. Coming here in the mornings just as the morning mist dissipates provides for some truly spectacular views as well. Baidi City looks very close from here but looks can be deceiving. The Peak of the Three Gorges is the highest point as the three gorges standing at 1300 meters above sea level. Newly built roads and new tourism center make visiting the peak very easy and convenient.

View from the observation deck on the Peak of the Three Gorges.

More than 600 meters high and standing about 400 meters apart, these two cliffs form Hankuimen, a valley now overgrown with grass, trees and flowers. Up until recently this area was only really known to the locals but a tourism center, homestays and restaurants will soon be welcoming visitors from around the world.  The two cliffs make for a spectacular view both during the day but also during the last hours of the day in the sun’s golden light. Hankuimen’s natural scenery is nothing short of breathtaking. 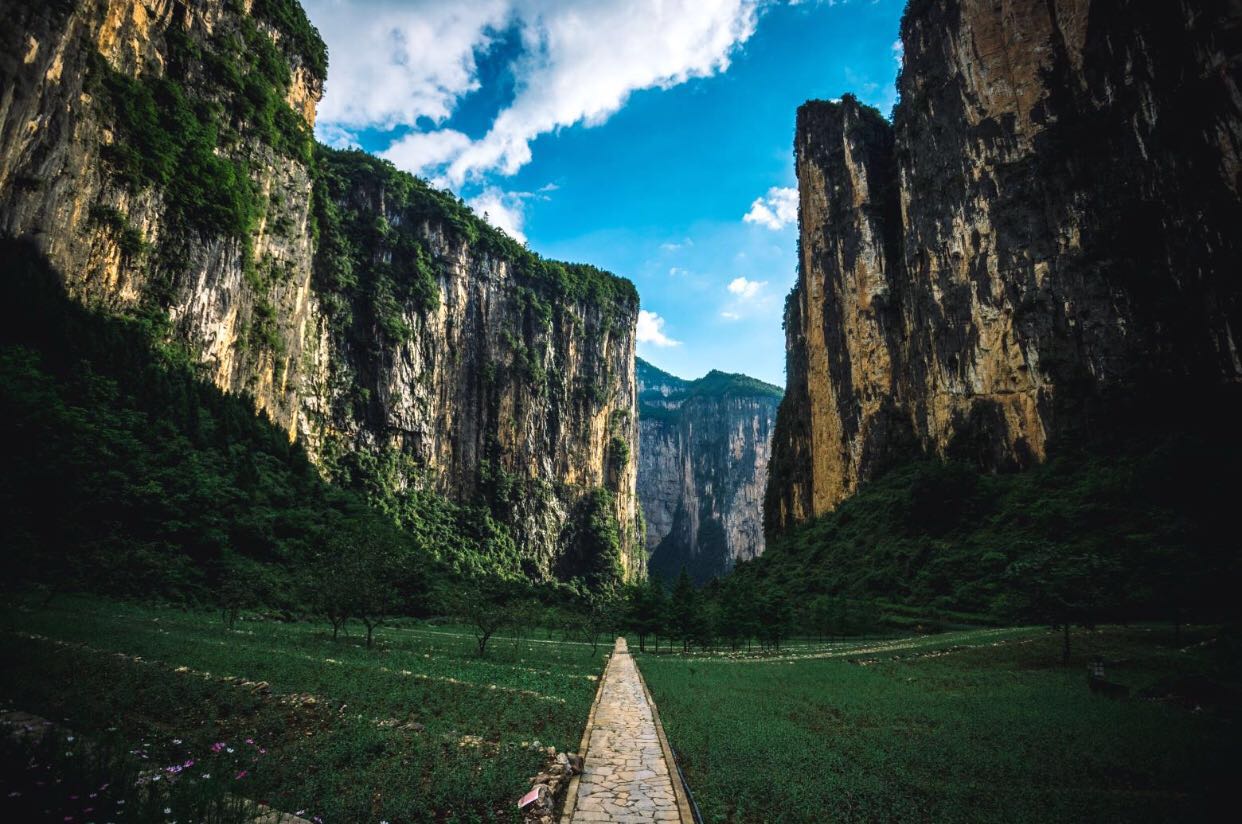 The more than 600 meters deep Xiaozhai heavenly pit sinkhole will wow you with its scenery but it will also test your strength and resolve. Walking down the stairs to the bottom may seem an easy task but it is a completely different story when you have to go back up. Getting down to the bottom of the pit you’ll be greeted with a spectacular view. A river runs through the bottom of the sinkhole, which rushes out from a giant cave and flows into another one and disappears.