The Largest Flood Passed through the Downtown Chongqing This Year

Chongqing- At 8 am on July 18, the most significant flood since the Yangtze River entered the flood season this year passed through the urban Chongqing. According to the second hydrological information, the Jialing River’s peak passed Beibei District on the afternoon of July 17. The water level of Beibei at 14:00 on the 17th was 188.09 meters, with a flow of 16,800m3/s, which was 10.03 meters higher than the water level on July 15. At 8 in the morning on July 18, the water level of the Cuntan, along with the Yangtze River, was 179.36 meters, and the flow rate was 40000m3/s, which was nearly 2 meters higher than 17’s forecast. 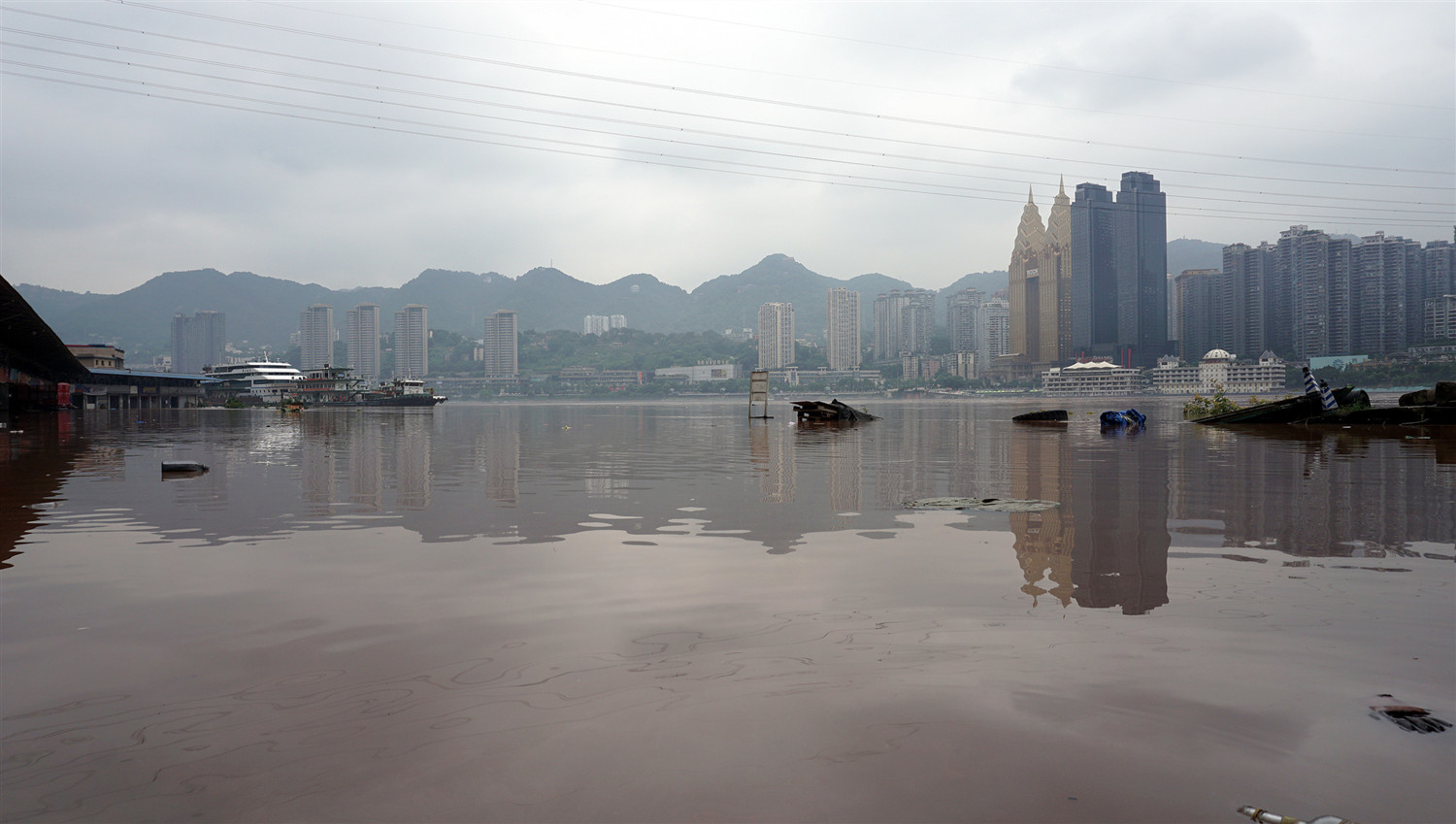 The water level in Nanbin Road

On July 16, the Chongqing Water Conservancy Bureau launched a third-level flood defense emergency response, reminding the relevant departments of districts and counties in Chongqing to implement protection and control effectively. Since July 14, heavy rain has fallen in Chongqing, which caused floods and landslides in parts of Chongqing. 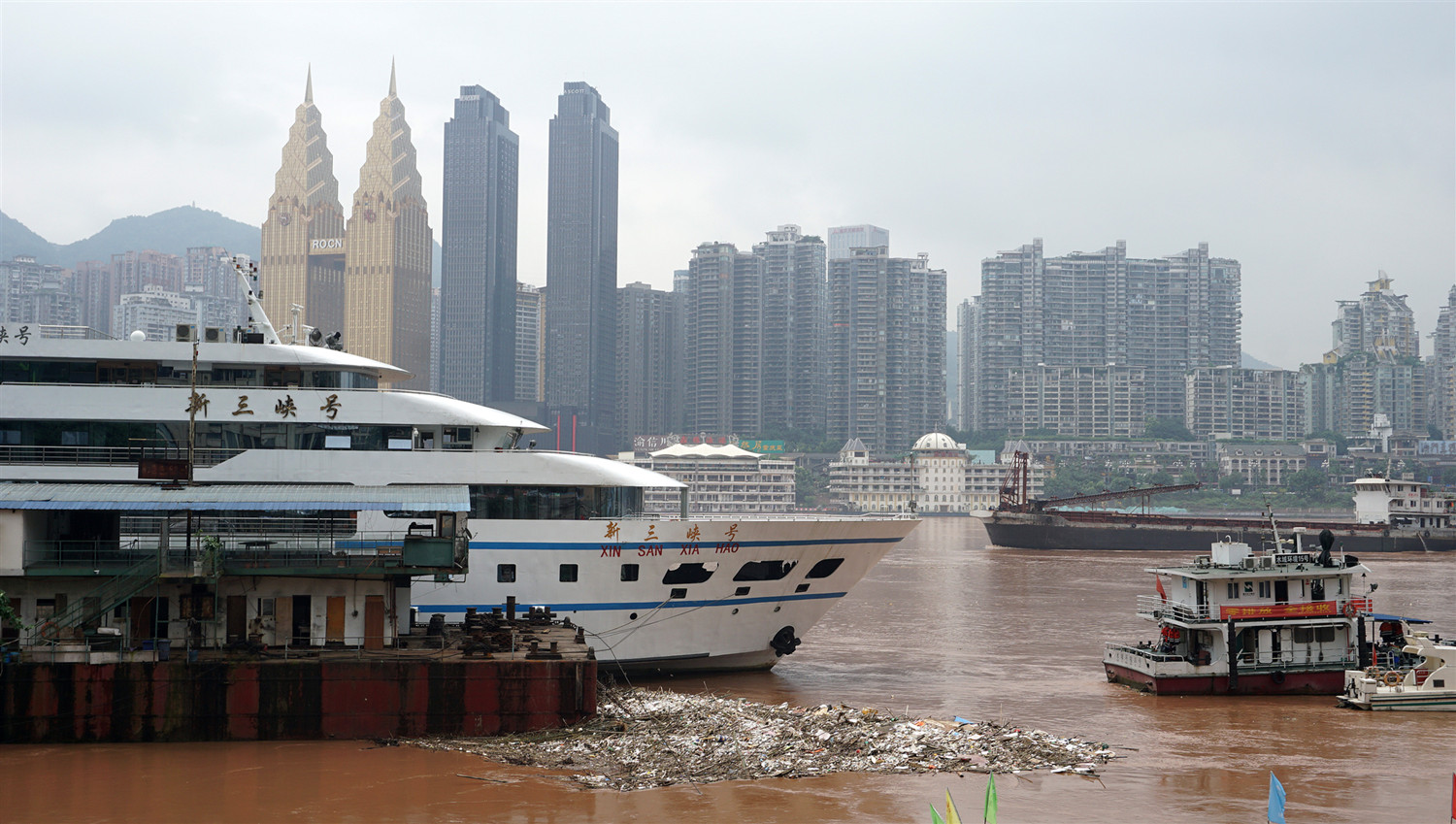 Cruise on the Yangtze River in Nanbin Road

In the area of Nanbin Road, due to the rising water level, the ship was close to the road and was in the same image as the pedestrians and vehicles. At the low-lying Haitangxi Wharf, the storefront and parking lot on the lower level have been flooded. 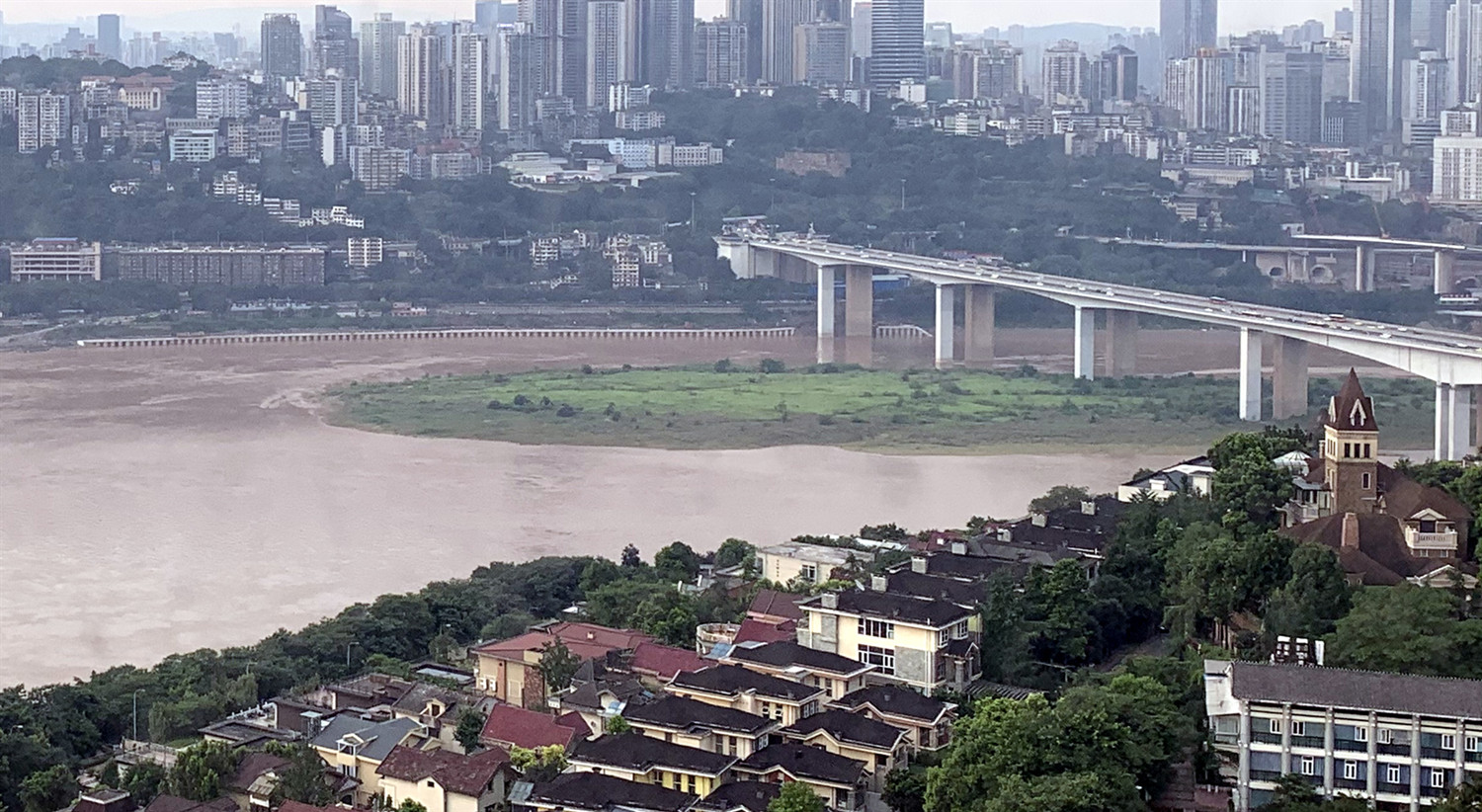 Shanhuba (a river island) on July 17

As of 16:00 on July 17, these floods and landslides have caused 465,649 people in 410 towns and streets in 26 districts and counties of Chongqing. The disaster has caused five deaths and five people to go missing, emergency resettlement of 20,154 people, and 4,974 people in need of emergency living assistance. Meanwhile, 19,603 hectares of crops were affected, of which 4,311 hectares had no harvest. At the same time, there are 762 collapsed houses, 2,801 damaged to varying degrees. The disaster has caused direct economic losses of RMB 746 million. 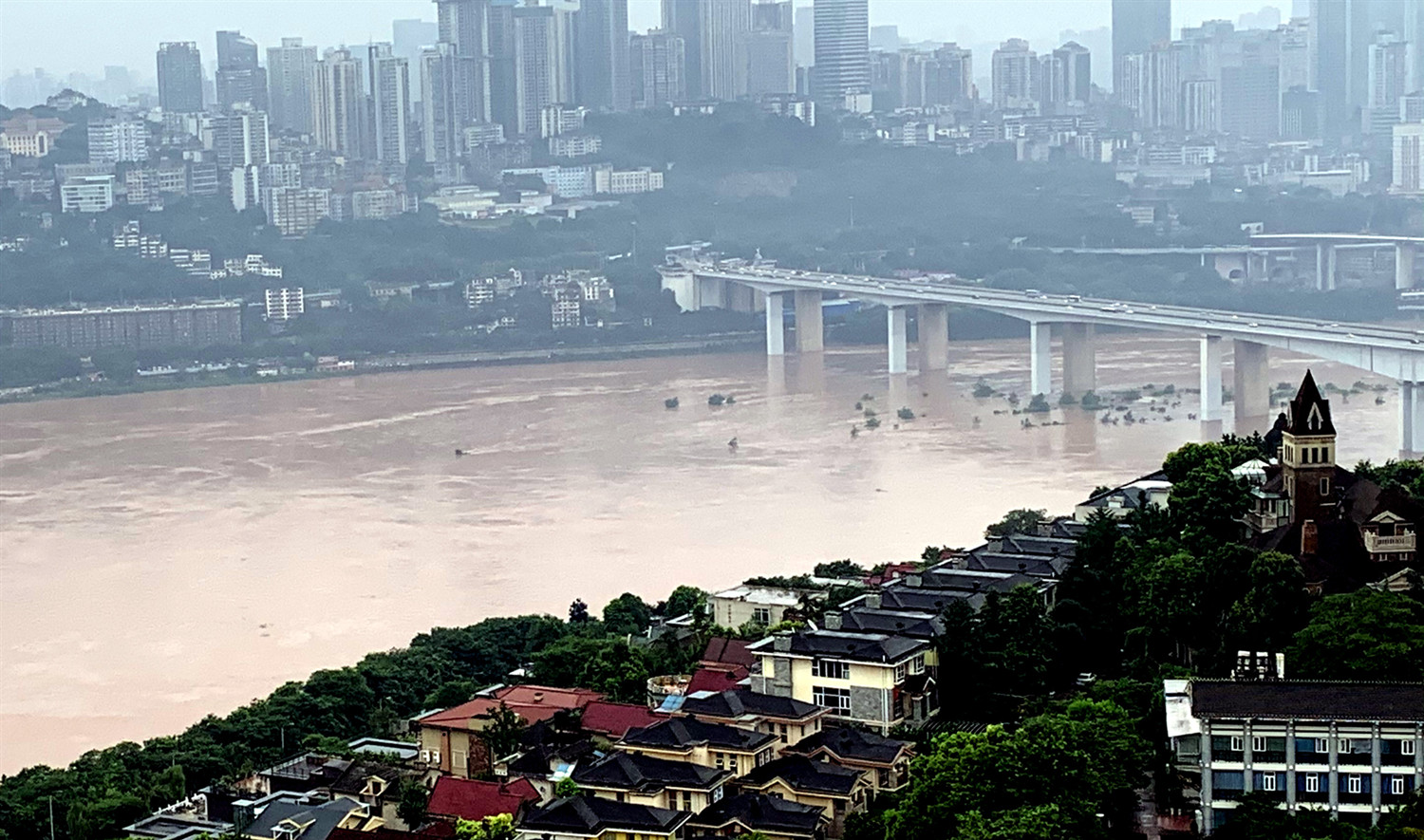 Shanhuba (a river island) on July 18

Wuxi County: Many mudslides occurred in the territory, and more than ten people trapped in six vehicles have been resettled

Affected by heavy rainfall, on July 15, more than ten mudslides occurred in Wuxi National Highway, which caused road traffic to be interrupted. There were six vehicles, and more than ten people were trapped in a dilemma. The rescuers used a forklift to clean up the debris flow on the road at that time. At present, all the trapped persons have been relocated to Xujia Town.

On July 16, heavy rain fell in Wulong District, which caused many natural disasters, such as mountain torrents, mudslides, landslides, and more, resulting in dangerous water accumulation in the streets of two towns. Some roads to villages were damaged, and the power and transportation were interrupted, resulting in the production and life of local people were affected to varying degrees. After the disaster occurred, the local government immediately launched an emergency response plan to organize rescuers, including government workers, militia, public security, and firefighters, to check the situation for the first time to implement rescue work. 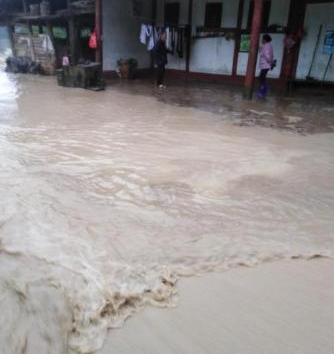 The flood in Wulong District

Up to now, the local disaster-stricken people have been adequately resettled, disaster relief, and self-rescue work are being carried out in an orderly manner. There are no casualties for the time being.

Affected by heavy rainfall, at around 1 pm on July 16, a large-scale landslide occurred in Yunyang County. The landslide formed by more than 1,000 cubic boulders completely blocked the road for about 30 meters so that vehicles cannot pass. 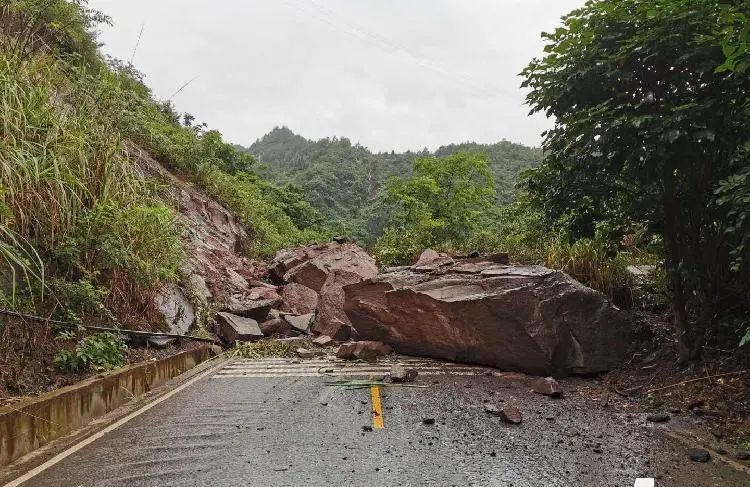 The boulders in Yunyang County

The local highway department quickly organized excavators and forklifts to start rescue work. However, since the landslide was mainly composed of boulders, the most massive stone of which was estimated to weigh about 850 tons, which brought certain difficulties to the troubleshooting work. Fortunately, no people or vehicles are trapped.

From July 15 to 16, there was moderate to heavy rain in Zhong County. The torrential rain triggered flash floods and caused the Sanhuichang Town to be flooded and many landslides. The local government actively implemented emergency rescue and disaster relief, strengthened the restoration of power and communications, and minimized the loss of the masses. 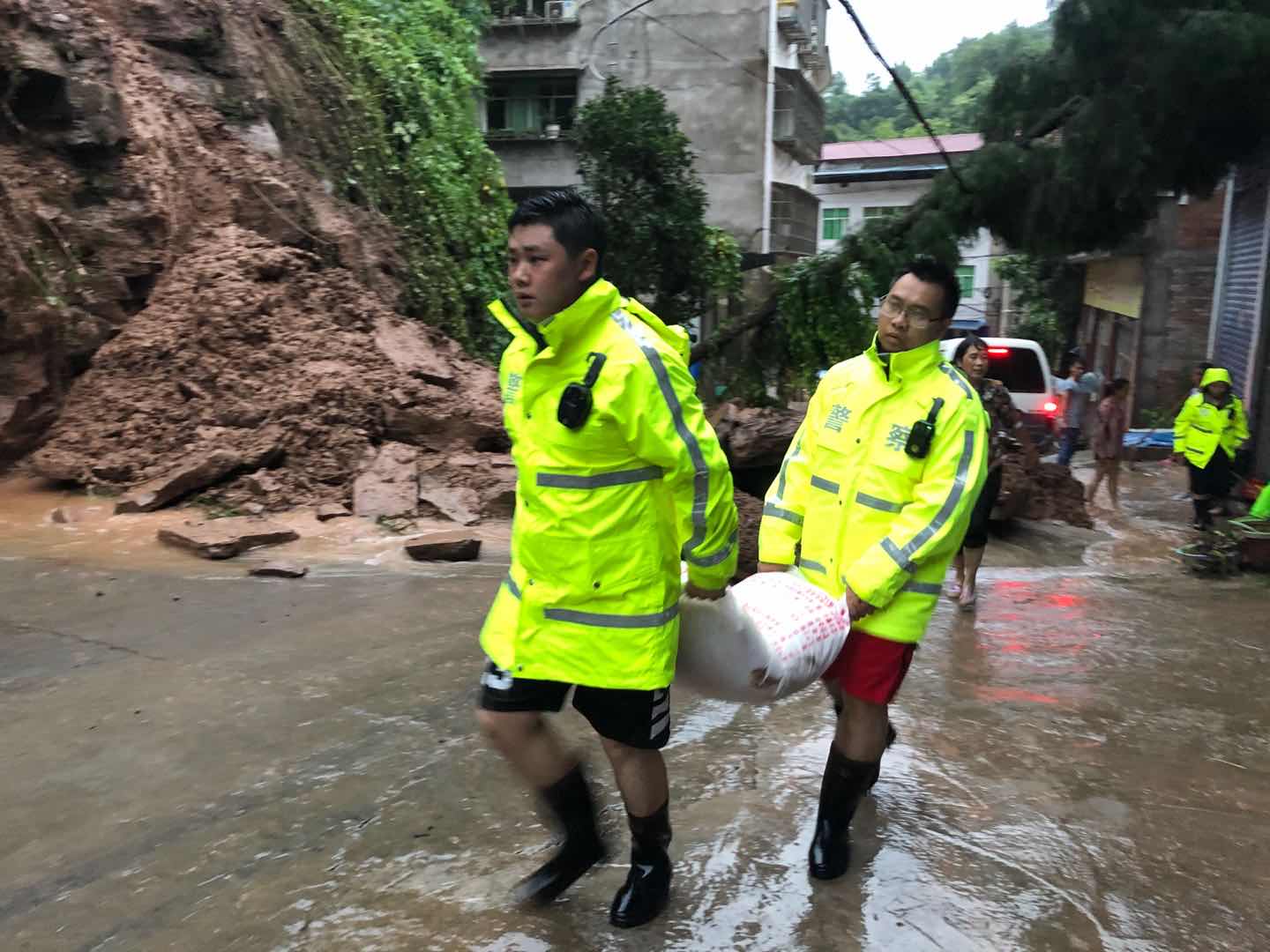 After the disaster, the local government implemented rescue as soon as possible and transferred the masses safely without casualties. Also, rescuers spared no effort to repair the landslide area to ensure that road traffic resumes as quickly as possible. The government workers also strengthened to focus on critical areas’ monitoring and prevention to prevent secondary disasters.

From 20:00 on July 15 to 16:00 on July 16, a heavy rainstorm occurred in Hechuan District, with rainfall reaching 264.6 mm. At present, the Hechuan District Fire Rescue Detachment has successfully rescued eight students and nine people there, with no casualties. 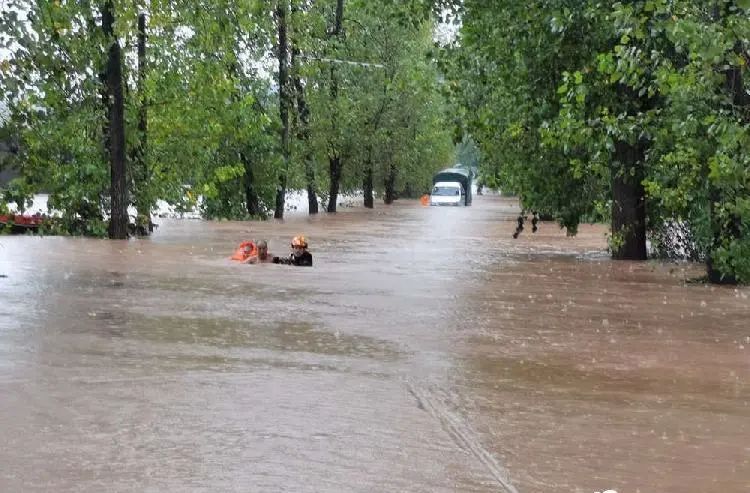 The flood in Hechuan

Starting at 17:00 on July 15, Wanzhou began to experience heavy rain. As of 10:30 on the 16th, 56 stations had heavy rain. The water levels of some small and medium rivers were obviously rising, most of the two old streets in Wuqiao Town were flooded with a depth of 1.5 meters, with more than 30 residential buildings and 1,050 households being flooded. 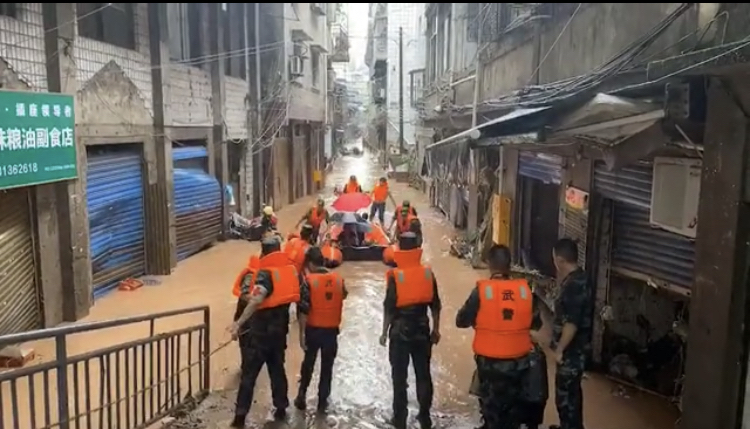 Wuqiao Subdistrict and various departments rushed to the scene to start rescue work. After receiving a request from the local government for reinforcements, the boat detachment of the Chongqing Armed Police Force also dispatched 87 people, five vehicles, and three assault boats stationed there as soon as possible to rescue with lifeboats, life jacket, and more.

Currently, more than 5,000 local residents were evacuated to safety. 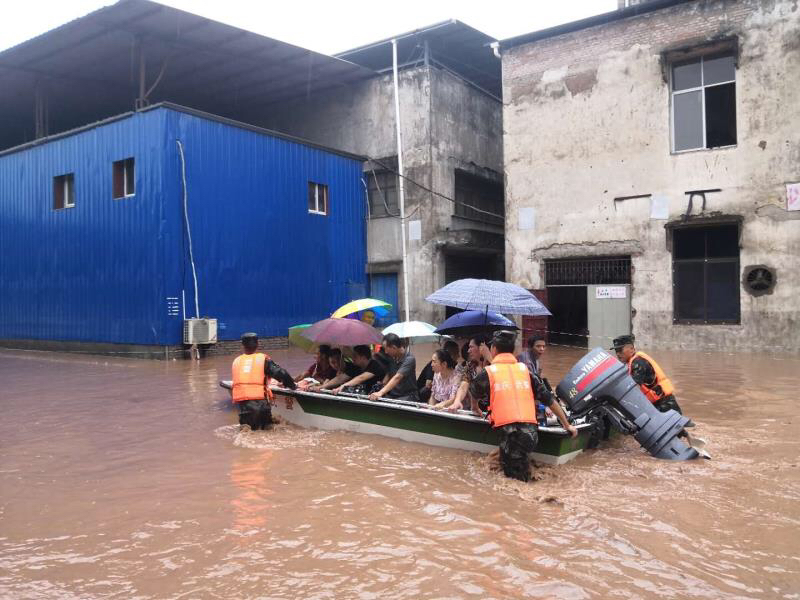