The Lighthouse Diaries: CHONGQING, CHINA, July 22 - The Pandemic Chugs On and the Steep Fall of Large Men

Wednesday, July 22 – The Pandemic Chugs On and the Steep Fall of Large Men

I must be brief, as my time and focus are tight and stretched thin. The business of living is a full-time job. The torn ligaments on my ankle are slowly healing, encouraged by daily swims at the gym, and I am thankful that here in Chongqing, China, we wear masks as a precaution but have not had community spread of COVID in more than four months. In many ways, all the learning and precautions I took against COVID-19 from the initial Chinese lockdown in January until March, the contents of my first diary, The Invisible War, were mainly in preparation for a more virulent second wave that we hope will never arrive here, or for the education and benefit of my family and friends back in countries that did not take our warnings seriously and are now fighting a much more serious battle against the pandemic. To restate those 300 pages: if you do a few simple things, you can stop the spread, and if you don’t, your population will be ravaged. And we are seeing that today, globally, and it will continue to be what many experts predict a horrific fall and winter, a mass death event, and warning civilians to ‘brace themselves’ for the trauma to come.

Saturday is Shaolin’s birthday. I’ve ordered a cake, I’ve ordered a bouquet of flowers, and I’ve signed a card. I went shopping for a few gifts, and I booked a party hall at a nice, new clean restaurant for 15 family people, a small affair, but again, I am thankful that we are safe in Chongqing and can do these things. That is what we got by instantly complying with 100% masks in public and allowing the government to do contact tracing and quarantines without argument.

Me: Let’s get to the gym, have lunch and bang out 2000 words on that new novel
My brain: I know the million-dollar name for a company of bondage-style portable Bluetooth bass enhancers for walkers of yappy dogs.

On social media, I’m exhausted with the stupid. I’ve been undercover in two anti-mask groups with Canadian affiliations and members. MAD: Mothers Against (Social Distancing) tries to play on the heartstrings of those that think protecting kids from COVID is abuse is a massive group of over 9000 mask holes including the large, muscled, tattooed guy named Chris that pushes around workers in malls and on busses and subways in front of cameras, assaulting the good emergency workers trying to keep us safe. I was quickly kicked out and banned for trying to talk reasonably to them. I joined another called MASK FREE, and instead, I would try to make them question why they held such strong beliefs, using a Socratic line of questioning, such as sharing “anti-mask arguments” and ask them to explain them to me.

The mental backflips they made to avoid making meaningful connections and understanding their duty to protect their fellow citizens was astounding. In the end, I had to quit, because the group is like cancer, and I cannot stand to be near that much ignorance anymore. I do suggest we don’t bother to argue with these people. Instead, we must isolate ourselves away from them and know that when they get sick, and their loved ones die, they will finally change their minds, and hope it doesn’t affect us much.

There’s lots of news in vaccine land, where many of our hopes for a return to normalcy lie. An Oxford vaccine supposedly can train our immune system to both produce and sustain antibodies for COVID-19. Two million Chinese army members are being vaccinated with a trial here in China. This is promising if it goes well. Other studies show quickly depleting antibodies, indicating a vaccine may be a seasonal one. Additional trials are rapidly progressing. There seems to be some connection between T cells and adaptive immunity; this is an exciting area of study to follow. Some theoretical studies show that fermented cabbage, sauerkraut, and kimchi may help prevent ACE2 receptors from bonding with COVID-19, but that is very preliminary and possibly wishful thinking, but developing healthy bodies is an essential aspect. My interest is in studying memory T cells, which may prove to be an important factor in why some cases are so strong and some so mild.
Canada is curving up again due to the lax vigilance, opening up, and the perceived immunity or just indifference and foolishness of young people. This is worrying, 43 in Ottawa, a few hundred in Ontario and Quebec, but these numbers still pale compared to the neighbors down south. Today we’ve got 15.3 million diagnosed cases globally with 630,000 deaths. Of that, the USA makes up 4.1 million cases, although experts say the real number is likely 40 million, or that 10X factor, with 146,000 deaths. A study showed that 99% of those would have been preventable using a South Korean or Chinese (competent) response to the epidemic, 70% even with a less stringent German methodology. It is a shame. Trump is wearing a mask now, proud of himself for that, and being able to hold a glass with two hands. He’s sent unmarked federal police in unmarked vans to kidnap protestors in Portland, including beating down war heroes and teargassing protesting peaceful moms. Critics claim his sagging poll numbers caused him to use federal police as an election tool to bolster his racist and conservative religious base, emboldening protestors and making America more divisive in the midst of a crisis that he simply has no plan for.
Around the world, we see new lockdowns. Barcelona has locked down 1.5 million people to stop a second wave spread. Ürümqi, the capital of Xinjiang, is now under a new stringent lockdown. Beijing is recovering now back to level 3 after 14 days w no new cases.

I took Xiaolin downtown to shop for a new phone and saw that even in Chongqing, there was a more stringent approach: The Apple Store required masks on, temperature checks and alcohol hand wipes to enter, and that was standard in the shopping malls nearby and the book store.

A few days ago, I was invited by my Chongqing Daily News Colleagues to eat Hot Pot with a famous Canadian Youtuber Gailo60, aka Kirk, a retired businessman who makes a good salary wining and dining and traveling China to show off his life for interested netizens.

It was an interesting chat, a nice meal, and only at the end of it did I realize that this guy who travels week after week has probably seen more corners of China in 2020 than I have in all the years I’ve lived here and fingers crossed that he and I are both still COVID free. 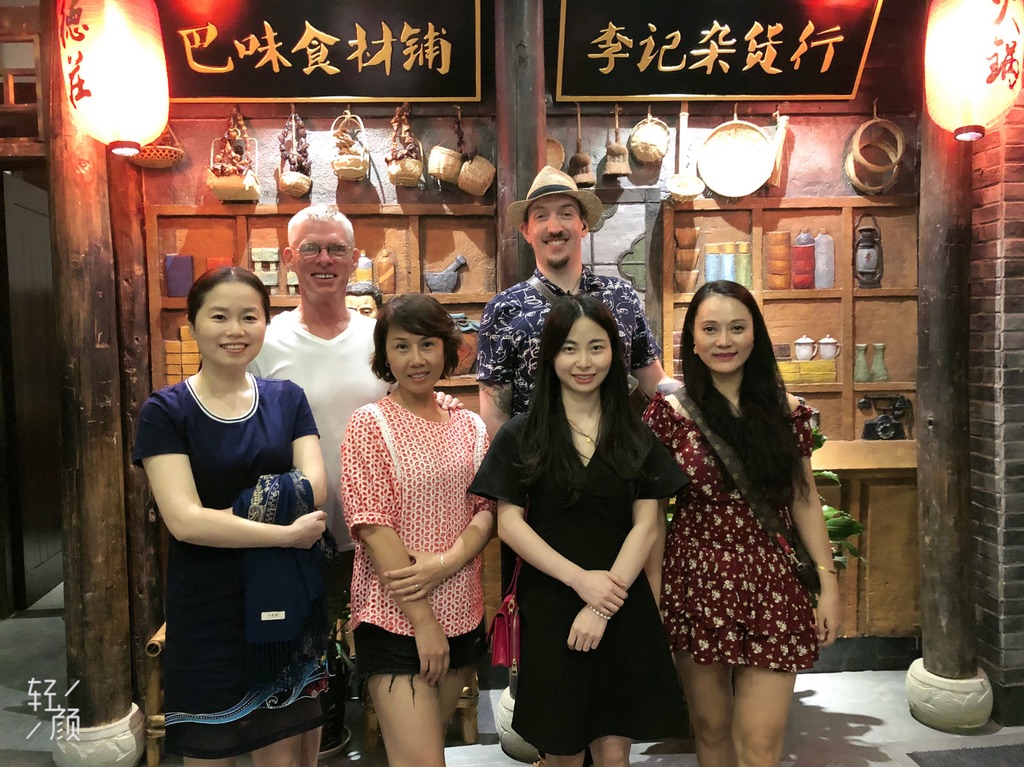 The world outside my peaceful window is a crazy place, but a year that seems committed to becoming more equitable, more just, and less tolerant for the abuses of powerful men. While Trump clings desperately to his failed administration, responding to a FOX News interview with Chris Wallace asking: what will be your legacy as President 45? “I was treated very badly,” a small giant tumbled this month. Growing up in Ottawa, I was active in the dance music community as a young man, and gave Dylan Lane, aka DJ Mantra, aka The Phat Conductor, aka bass music superstar ill Gates his first gigs at some of our small local events in the late ’90s. We became good friends, in and out of touch over the years, but again worked on some events, songs, and awesome shenanigans a decade later in Toronto leading up to his move to SF and then LA, where he runs the producer dojo. During this time, he had another very close friend who he would tutor in music production, DJ with and play lots of festivals: Lorin Ashton, aka Bassnectar. Bassnectar to many in the dance music community was a progressive force for justice, equality, antifascist, profeminist, antiracist, and more than one man. To many, it was seen as a movement. He’d roll into town with 26″ panel trucks full of lasers and PK sound systems and fill stadiums with 20,000 fans and wow and amaze with a psychedelic audiovisual experience. Unfortunately for believers, nobody is perfect, even our heroes. Some would say, especially our heroes. People in power get corrupted far more quickly and worse than ordinary people, for their opportunities are far more significant. With Bassnectar, it was teenage girls, and the “Evidence against Bassnectar” account on Instagram posted damning voice calls, emails, and other evidence to show the 42-year-old DJ engaged in intimate relationships with girls 16-18 years old for years, manipulating and “grooming” them as only a powerful, older, rich superstar could. He quickly apologized and retired his 20 million USD DJ empire, retreating from public anger and scrutiny.

Back in Canada, another powerful man is taking a long-overdue tumble. Peter Nygård, the 70th wealthiest Canadian with a net worth of 820 million dollars, is well known for his fashion designs and lavish lifestyle. Lately, it’s the disturbing allegations of sexual abuse of minors, including children, often taking place in his Bahaman island Nygård Quay, a fortified mansion patrolled with armed guards and high fences, in shark-infested waters. Does that sound too comically evil to be true? It isn’t. Years ago, when I was a younger man, an international DJ and producer of dance music and dating a fashion model, who I can not name or even be too specific about due to, I’ve been told, NDAs and the creepy lawyers the protect wealthy pedophiles and elite super predators, my girlfriend at the time had been invited with some other girls to go to a party on his island in the Bahamas. We had been in a bit of a cool-down period, and one day she called me up, offering me a trip to this fabulous, wealthy party in the Bahamas, on a private plane, to enjoy the lavish lifestyle of the super-rich with her. I was stubborn and told her I would think about it, but later went shopping for a new swimsuit anyway. When I called the next day, I was informed Robert De Niro had already taken my seat on the chartered plane, and that was that. Weeks later, sick and drained from the experience, she did recount to me the unreal experience of being a young model around these men; the lavish feasts, the drugs and alcohol, and, at night, they would gear up and hunt the women and children as prey around the island. One night, they hid under a bridge for hours with water up to their chins. Another girl slipped on a rock, and cracked her head, and was taken away to a hospital, or somewhere. The girls had their passports taken away and coming home itself wasn’t an easy ordeal, but this was par for the course for a Peter Nygård party. His neighbors hated him, especially when their girls or boys went missing. Being rich, famous, or great does not make you a god, far more often, only a fatally flawed human being. It’s a bit of a shock to the establishment, but I for one am sure glad to see these giants finally fall.

Kai shares his collection of diaries from his friends around the world with iChongqing. You can read more of them on his blog, www.theinvisiblewar.co, and his soon to be published book The Invisible War: A Canadian’s Diary in Chongqing.