Chongqing- Yuzhong district has always lived, breathed, and prospered by the dramatic 3D landscape of mountains and rivers. The majestic sight of lofty skyscrapers and elegant bridges provide additional touches of splendor to the city that never sleeps. 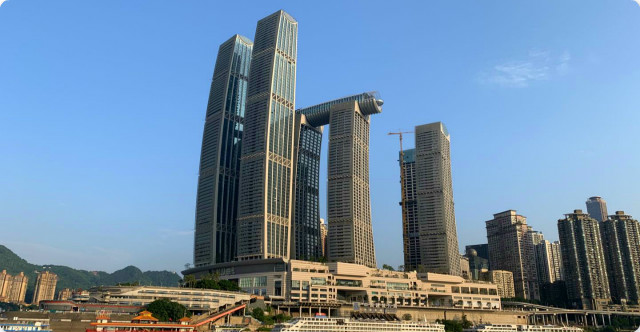 Raffles Square is located at Chaotianmen Docks, the zero kilometer point for visitors to explore the city of Chongqing.

Mountain City has grandiose plans to further the continued trend of rapid development. As new additions to the city skyline vie for pride of place, exciting new attractions offer new possibilities to explore the city from up high.

Take in Mountain City from the sky while experiencing the novelties captured from within the Raffles Crystal Corridor and Observation Deck, the WFC Observation Platform, the 54th floor Westin Infinity Pool, and borderless cuisine offering panoramic river views.

Pathways remain a distinctive element of life upon the hilly peninsula, and still cut their way serenely across the Yuzhong landscape to this day. Twenty-three trails are covering a total of 120 kilometers where you can explore the historical treasures of Mountain City. 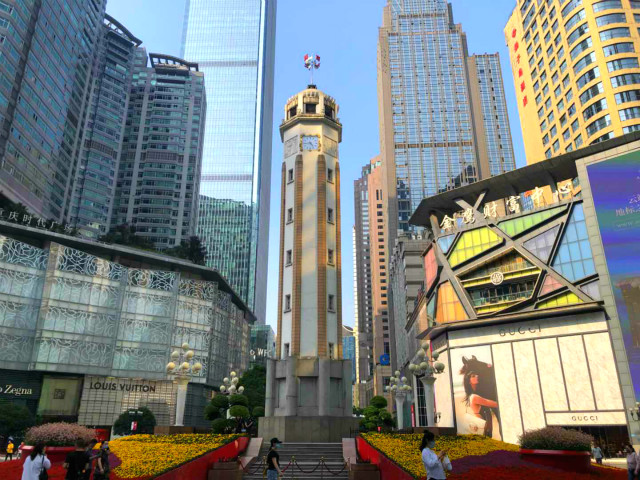 The Zhang Clan Garden Trail is over a century old and has now been restored to its former glory, replete with red walls and blue tiles amongst the neat and quiet surroundings. The trail is home to the former residence of renowned jurist Shen Junru, the past grounds of the Sino-French School, and Thorny Shrub Gardens. The scattered sites of interest all offer unique stories for the visitor the explore and gain a deep sense of understanding.

In Yuzhong, subterranean ring roads cut past the lofty peaks. Cruise boats sail up and down the rivers below, lengthy escalators meander their way up the hillsides, monorail trains shuttle discreetly back and forth overhead, while the Yangtze Cableway ferries tourists across the district unto the opposite banks.

Countless domestic and overseas tourists are enticed to Yuzhong District for the breathtaking scenery of a city wrapped tightly amongst the mountains and rivers. The topography meant that planners had to design a city that merged with the surroundings to the unique spatial and visual effects. 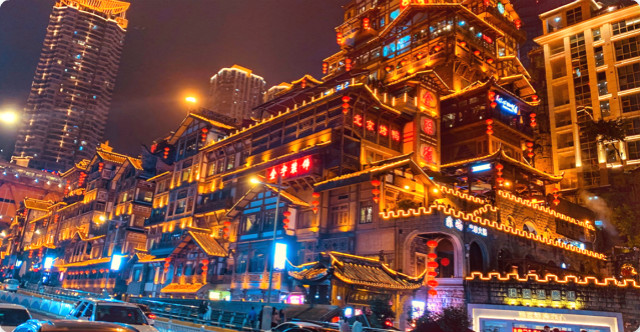 Hongyadong is a top tourist destination in Yuzhong District, and the design reflects the traditional stilted building design of Chongqing.

As ever, Yuzhong continues to embody the driving spirit and trendsetting energy befitting the image behind this landscape picture.

The Two Rivers-Four Banks project us presently under construction and will attract ever more people to Yuzhong District to enjoy the unique charm.

Chaotianmen Square is a symbolic location in Chongqing, and the starting point for city exploration, as declared by the central axis road sign marking the point as Zero Kilometers. 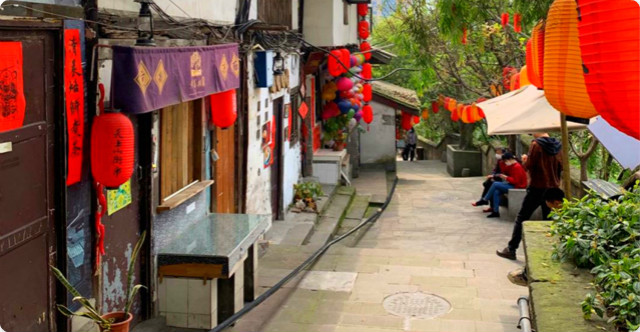 The Mountain City Pathway offers a quiet and scenic walk through old Chongqing.

The first rail line built after the founding of New China is still in use today at Caiyuanba Station. This structure has stood witness to the vicissitudes of time and the prosperous development of Chongqing. The location is forever etched in the memories of passengers through reunion, the parting of ways, and the fond nostalgia of people living afar.

Chongqing is a city of heroism. In ancient times, general Ba Manzi performed great self-sacrifice, as he offered his own head in defense of honor and love for his country. Last century, revolutionary martyrs stepped fearlessly into the breach for the establishment of New China. Their courageous acts have been epitomized within the timeless Spirit of Red Cliff Village.

The Liberation Monument stands tall in the central district of Jiefangbei and symbolizes a hometown fortress of spirituality in the hears of Chongqing people. 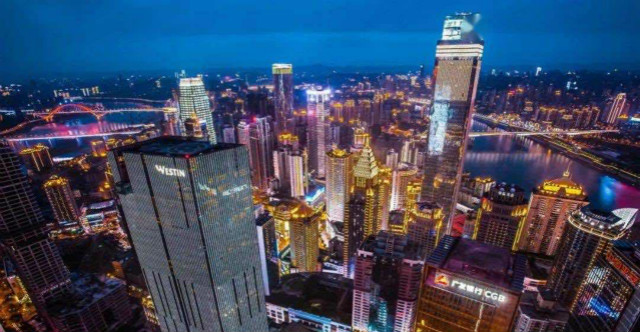 Yuzhong is a district that never sleeps.

The city landscape scroll continues to unfold as restoration projects bring the traditional face of urban Chongqing back to life. Quintessential locations include the Eighteen Steps, where old traditions, anecdotes, and urban legends await the curious visitor.

Chongqing is a city-friendly to outside flavors, where people from all corners can find their place in harmony. The daily undertones of happiness, comfort, and vitality lie beneath an outward appearance of modernity, fashion, spice, and dynamism. 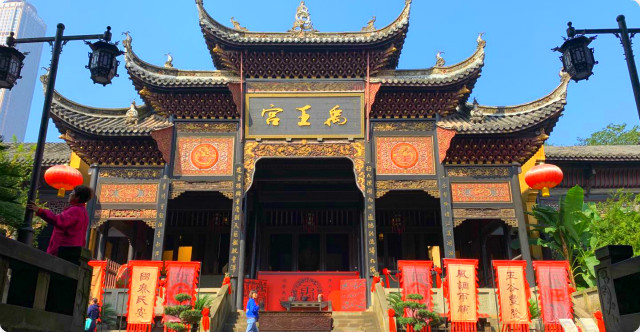 Huguang Guild Hall has seen over three hundred years of history in Chongqing.

The famous restaurants of Xiaobinlou and Xiaodongtian embody a culinary tradition that exudes the passion and forthrightness etched in the hearts of locals.

The Yuzhong Peninsula was once home to the Eight Conference Halls built by immigrants from all over the nation, where culture, products, and Bayu tradition blended to mold the inclusive natured character of Chongqing people.

The landscape incorporates the tastes of the north and the south, a vivid urban atmosphere featuring both bustle and serenity, hot while full of romance, profound yet warm-hearted. 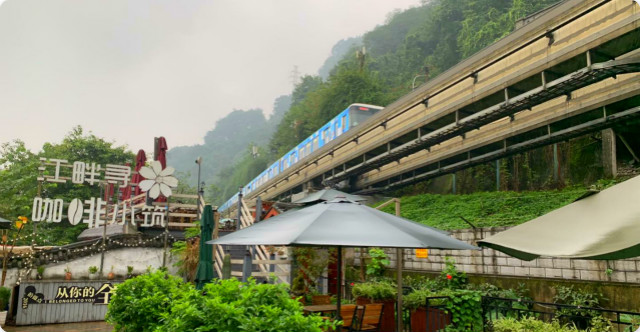 Relax amid the mountain and river scenery of Yuzhong as the monorail train glides past overhead.

Nighttime in Yuzhong stirs the soul. Those who love a bustling atmosphere can experience the night markets of Jiaochangkou and Bayi Road; youthful art lovers can explore the Testbed 2 Cultural Innovation Park. At the same time, visitors searching for old Chongqing can wander Shancheng Lane and the Eighteen Steps to immerse in the joys of ancient memory.

In the eyes of residents and workers, Chongqing has developed on solid foundations with elegance and unaffected sincerity. In the eyes of tourists in search of a poetic faraway land of wonder, the atmosphere of Chongqing is hospitable and brimming with energy. In the eyes of investors, the city forges ahead on accumulated success in common unison, while for many, the city infuses a lasting impression of vitality.

In 1891, the Chongqing Customs House established nearby the Tangbang Office at Chaotianmen Docks as Chongqing opened to the outside world and entered upon the international stage. 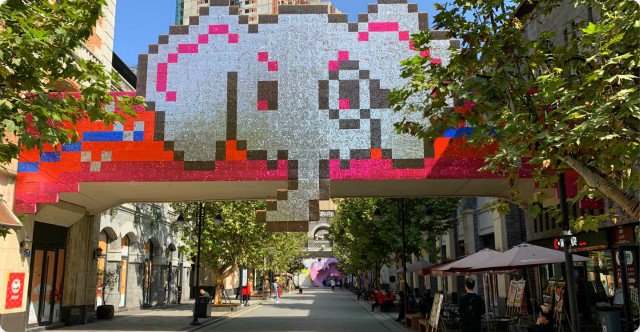 The restored Baixiang’ White Elephant’ Street is home to many former historical sites.

Baixiang Street is a renovated quarter home to former historical sites such as the Customs Supervision Office and the French and German consulates. The area is inscribed with the progression and integration unto the world in Chongqing.

Today, the consulate-generals of nations from across the world still gather in Yuzhong District, where the Chongqing Pilot Free Trade Zone and China-Singapore Strategic Interconnection Demonstration Project display the advantages of open economics, and where over a thousand foreign institutions have set up.

As a result, Yuzhong is the natural choice to lead in opening up and development in this day and age.

Yuzhong District nestles tightly among the idyllic scenery of mountains and rivers.

Jiefangbei Pedestrian Street is also a must-visit attraction for visitors in Chongqing. In July 2020, the area was designated a National Demonstration Pedestrian Street in conjunction with the new rising stars of Raffles City and Longfor Times Paradise Walk.

Come to Yuzhong for a live open-air fashion show that plays out in daily life. Put on new designer clothing hot off the fashion walks, buy a pair of limited edition trainers, study an art exhibition with friends, attend a concert, and experience afternoon tea at high altitude. The district of Yuzhong has everything to satisfy all your audio-visual and culinary expectations.

Experience the skyline of Chongqing from high altitude.

The works all displayed craftsmanship full of emotion and creativity that tells the incredible story of Chongqing and the beautiful Yuzhong District.

Over millennia, Yuzhong has always been at the historical forefront of Chongqing through Bayu culture, the spirit of resistance, unity, and immigration, which have blended to mold the indomitable, open, and inclusive character of Yuzhong.

The district is now a leading area in the modern service industry, an exhibition area for urban history and culture, a central window area for international exchange in the west and central regions of China, and a demonstration area for urban beauty. 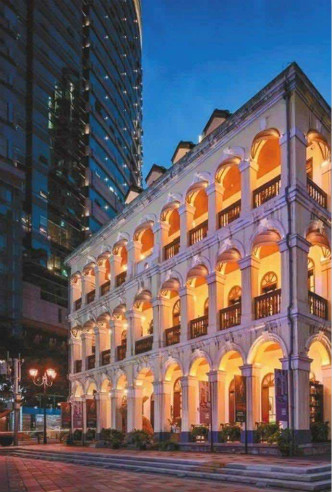 The restored Sino-British Communications Centre on the Yuzhong Peninsula.

Chongqing is undergoing a transformation where aesthetics and development go hand in hand to the pure delight of residents and visitors alike.

The scenic landscape picture of urban Chongqing merged elegantly amongst the natural backdrop is unfurling to display the seamless integration of culture, business, and tourism for everybody to know and love.