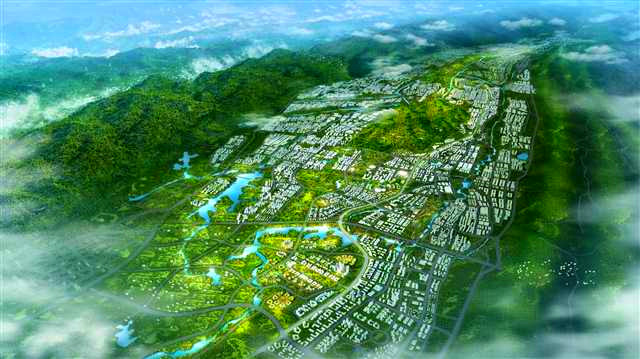 An artistic bird’s eye view of the Chongqing High-tech Zone.

The mountain ranges of Zhongliang and Jinyun run parallel to the West, with the Yangtze River in the south and Jialing River to the north. It is these geographical features that outline the Western (Chongqing) Science City known as the Chongqing High-tech Zone.

This western trough of Chongqing has prospered from merchant traffic since the Han and Tang dynasties and reached its peak over the Ming and Qing dynasties.

During the Chinese People’s War of Resistance against Japanese Aggression, the national government relocated here as Chongqing became the wartime capital. Prominent figures such as Guo Moruo and Fu Baoshi, Bajin, and Bingxin also followed, bringing a wealth of cultural elements.

As a strategic platform for the planning and construction of the Western (Chongqing) Science City, the upgraded Chongqing High-tech Zone is going all out to provide fresh impetus to the three aims of green, open, and high-quality development. 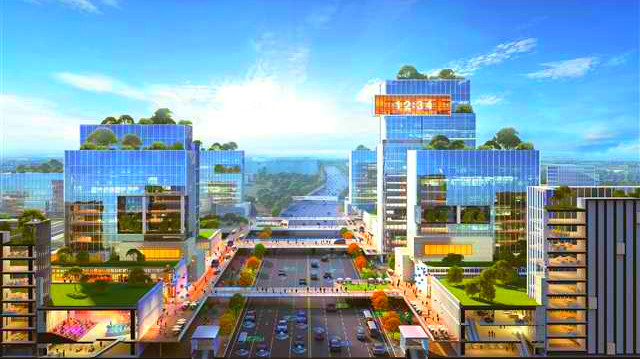 Science Boulevard is currently under the first phase of construction.

Management and service mechanisms have been streamlined as part of a series of strategic policy, as ever more industrial projects in high-tech scientific research have settled and further projects under construction that will embody Western (Chongqing) Science City characteristics.

Today, the Chongqing High-tech Zone brims with untold vitality, where the dream of building a home for science and entrepreneurship is becoming a reality.

Upon completion, the latest plans are for the Western (Chongqing) Science City to span between 5 and 15 kilometers east to west, and 80 kilometers north to south, stretching across the 5 districts of Beibei, Shapingba, Jiulongpo, Jiangjin, and Bishan. The Direct Management Park in Chongqing High-tech Zone is to be the core area.

Within the scope of the Science City, there are currently many golden signboards such as the National Independent Innovation Demonstration Zone, the China (Chongqing) Pilot Free Trade Zone, the National High-tech Zone, and the Xiyong Comprehensive Bonded Zone, areas that have brought together 28 higher education institutes including Chongqing University, and more than 200,000 university teachers and students. 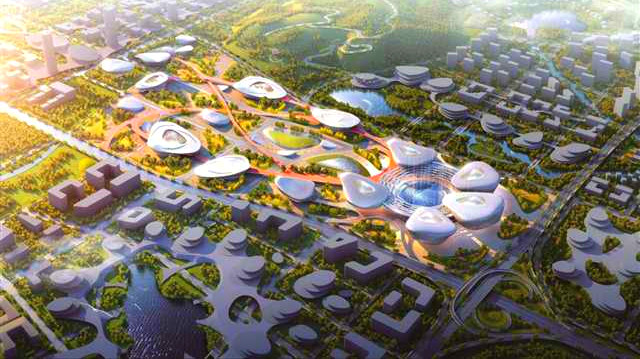 The Science Hall is soon to become a major attraction in the High Tech Zone.

There are 169 research and development platforms at the municipal level and over 14 industrial zones, such as the Xiyong Micro-electronics Park. As a result, there are abundant resources in science and research and solid foundations for scientific industries.

The core area of the Science and Technology Innovation Center enjoys national influence, while the Comprehensive National Science Center is leading development in regional innovation. Together, they have formed a new engine promoting high-quality development in the Chengdu-Chongqing Twin City Economic Circle. A pioneer zone provides a vital link in the global innovation network.

There is no doubt that Science City will lead the future world of technology and become a home for scientists and entrepreneurs where innovation, openness, tolerance, and the pursuit of dreams are free to soar.

In addition to scientific innovation, the Chongqing High-tech Zone also provides a quality residential environment where nature and people coexist in harmony. 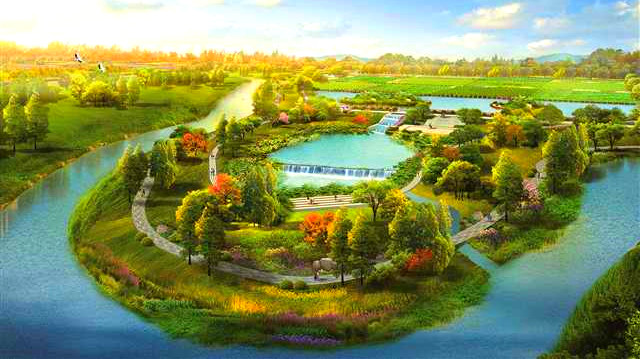 The High-tech Zone is also an ecological paradise of mountains and water.

A total of 140 square kilometers of residential space fully meet inhabitants’ societal needs from all walks of life. As part of an efficient network centered on personalized service, neighborhood management services respond to requests within 15 minutes, while individual residential complexes require only 5 minutes.

The environment features two major rivers, a hundred lakes, and a thousand creeks that combine to form a natural water system through wetland parks. The result that mountains, waters, and pastures blend harmoniously amidst the cityscape.

At present, the Chongqing High-tech Zone is further optimizing the residential and ecological face of Western (Chongqing) Science City to create a model for new urban life, where the natural beauty and complete functionality will satisfy the expectations and visions of a future city for all.

Construction of the 10.5 kilometers long Science Boulevard has entered the initial phase, while the urban road network has gradually matured. Many landmark projects such as the Science Park, Science Hall, and Science Valley have been launched in succession, while over ten schools have been newly built or expanded this year. At the same time, hospital construction is also stepping into high gear. 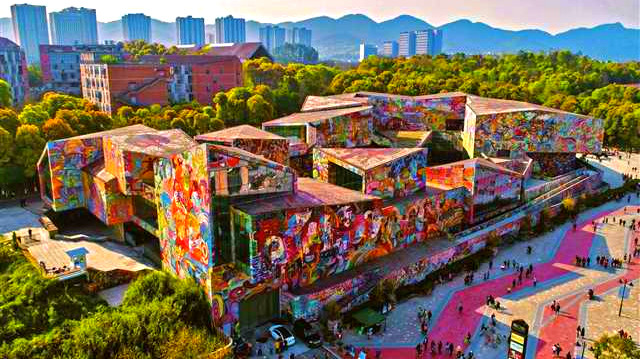 Science cities of the future will merge technology with urban life to integrate production, education, research, business, and housing. It will become the intelligent core of urban innovation and development and a residential environment of strong and wide appeal.

There is no shortage of beautiful scenery amid the green mountains and waters surrounding the Chongqing High-tech Zone. At the same time, Bayu tradition, the spirit of resistance, and modern living blend seamlessly to enrich the area with unique cultural charm.

The ancient Chengdu-Chongqing merchant road first appeared in the Han Dynasty, took shape in the Tang and Song Dynasties, and prospered over the Ming and Qing Dynasties.

Two important posts along the merchant road are Baishiyi and Zoumagang in the modern-day Chongqing High-tech Zone, which witnessed their historical prosperity.

Zouma Ancient Town was formerly a prosperous stop on the Chengdu-Chongqing merchant road.

Nowadays, sections of the ancient merchant roads have transformed fitness and tourist trails that link the Chongqing High-tech Zone’s beautiful scenes, such as the Jiufeng Mountain Scenic Area and Hufeng Mountain Eco-tourism Area.

When the national government relocated to Chongqing during the War of Resistance, literati figure Guo Moruo resided in Quanjia Courtyard of Xiyong, Chongqing, where he united a patriotic circle of numerous cultural personages such as Lao She, Mao Dun, Yang Hansheng, and Tian Han. As a group, they used the courtyard as a base for resistance activities during the war.

As the number of talented figureheads accumulated like shining stars along the Liangtan River banks, scholars began referring to Liangtanba, Shapingba, Xiaba, and Baishaba as the Four Cultural Dams of Chongqing during the War of Resistance. This historical period seems to have planted the seeds of cultural prosperity for the future Chongqing High-tech Zone.

There are now 28 universities with over 200,000 teachers and students gathered in the High-tech Zone in the present day and age. The campuses of academic institutions here offer attractive landscapes, such as the Chongqing University Botanical Gardens, that integrates leisure, viewing, popular science, and education amongst the scenery of mountains and waters. 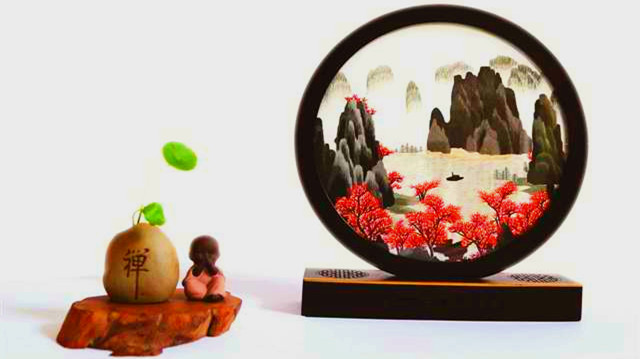 Chongqing Normal University has built a campus landscape based on being closest to the subway while farthest from the urban bustle.

Thanks to the accumulation of talent in literature and artistic disciplines, the Chongqing High-tech Zone has become a modern cultural highland. The fragrance of literature and art has gradually spread beyond the campus and into society.

Artists gathered in the High Tech Zone have created a series of innovative sculptures from various materials.

3D printers can use metals, plastics, and ceramics to stacking layers into three-dimensional objects. The products are mainly deployed in medical treatment, the automobile and military industries, and personal use items.

Innovative Shu embroidery is mainly based on traditional skills and materials to produce items with modern functionality and appeal, such as purses, fans, bookmarks, and music desk screens.

Many colleges and universities in the Western Science City have launched a series of cultural tourism figures that display their campus’s unique features and high in commemorative value. Their works feature umbrellas, postcards, stationery, key chains, refrigerator stickers, and cups.