Guoyuan Port, bearing various crucial missions, should not just be regarded as a port. Located in the core area of the China-Singapore (Chongqing) Multimodal Transportation Demonstration Base and the key node of the New International Land-Sea Trade Corridor (ILSTC) and other international trade channels, it links the Belt and Road route and the Yangtze River Economic Belt, fueling Liangjiang New Area to be a world-class transfer stop.

Situated in the hinterland of inland China, Guoyuan Port is far from the coast and the border. However, it is a logistics hub integrating “water, rail, and road transport” of the country’s inland rivers, and a vital shipping node connecting the Yangtze River Economic Belt and the Belt and Road route. 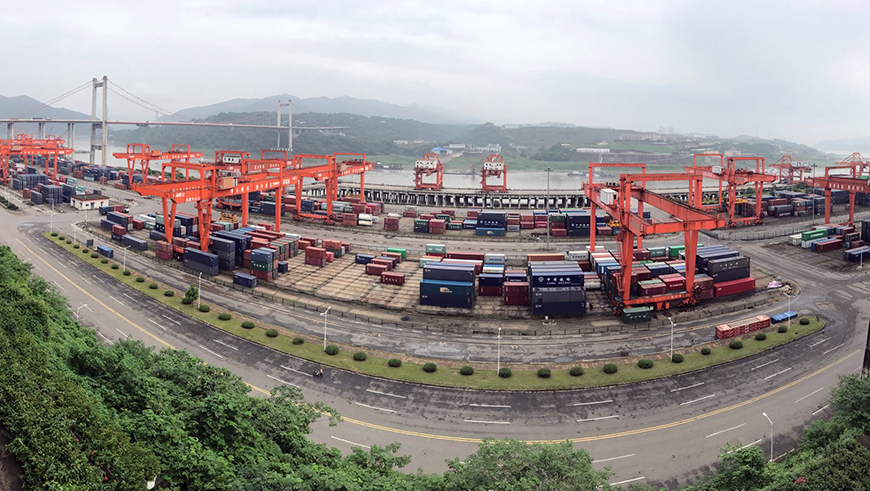 Opened on December 5, 2013, Guoyuan Port has become the largest inland river hub port in the country in the past seven years, which combines water, rail, and road transport.

As the third-generation modern western port planned and constructed by the Ministry of Transport of the P.R.C., Guoyuan Port is designed according to the “front port and rear park. mode”

Previously, when goods were transported to the port, they could only be transported to other storage, processing, trading, and repackaging places, which increased circulation costs. Now, with the port logistics park completed, the links can be reduced, and the costs lowered.

As for access to rivers and seas, the Guoyuan Port has opened up four passages in the east, west, south, and north, combining four rails, water, road, and air transport modes.

In the east, it connects to the Pacific through the Golden Waterway of the Yangtze River, reaching more than 200 countries and regions. In the west and north, via the Lanzhou-Chongqing Railway, it links Central Asia and Europe via the China Railway Express. In the south, it connects to the Indian Ocean through ILSTC, with access to ASEAN and South Asia.

To further bolster the port, Guoyuan Port International Logistics Hub Development and Construction Company has been specially established in Liangjiang New Area. By the end of May this year, the logistics hub, with a planning area of 20 square kilometers, had fully completed urban planning and land planning, divided into three functional areas: east zone, west zone, and extended zone.

The core of the east zone lies in Guoyuan Port, 80% of which has been completed. The west zone mainly includes Yuzui Railway Freight Station, Chongqing Guoyuan Bonded Logistics Center (Type B), and the core area of the China-Singapore (Chongqing) Multimodal Transportation Demonstration Base, which are under rapid construction.