Chongqing- Every city has its own unique historical imprint, and each region has distinct cultural symbols. The District of Jiulongpo is no exception. 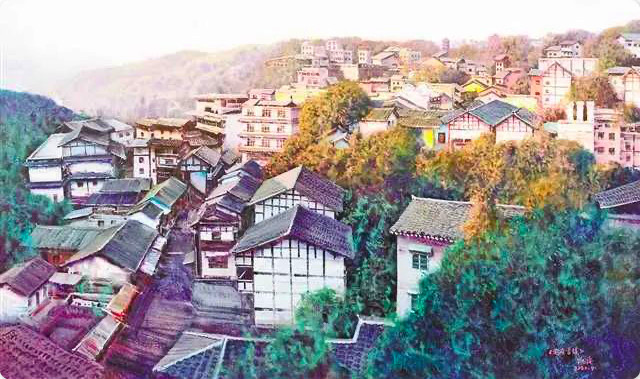 A painting of Zouma Ancient Town created by Weng Kaixuan.

Sichuan Fine Arts Institute (SCFAI) has cultivated excellence in the Huangjueping area of Jiulongpo for eighty years. The name is a shining star in the realm of Chinese artistry and a venerated symbol in the world of contemporary art.

The presence of SCFAI has not only nurtured the cultural essence of locals in Jiulongpo but has also opened a window for profound exchange between Chongqing and the outside world.

An oil painting of Xipeng Aluminium Capital by Zhang Jie.

As the time has come for Jiulongpo to exhibit boutique travel and culturally innovative products, the natural choice is to promote tourism through art and creativity through paintings.

Zouma Ancient Town holds great importance in China’s cultural history, as it was formerly a major trading post between Chengdu and Chongqing in ancient times. This traditional Chinese village bears the historical imprints of horse-driven commerce, and the hallmarks of renowned figures remain intact to this day.

Merchant’s passings through Zouma brought tides and folk songs from every corner, as well as historical accounts and heartening tales. Thanks to Zouma Ancient Town, Chongqing became known as the true land of artistic folklore in China.

Chinalco High-End Manufacturing is located in the Xipeng Area of Western Science City. It is the largest aluminum processing cluster of its kind and has a complete industrial chain. It is an urban landmark in Jiulongpo District and is forecast to achieve a double target of 100 billion yuan in output and market value by 2025.

Southwest Aluminum Group is a subsidiary that has produced high-quality aluminum materials for aerospace projects such as Tiangong, Shenzhou, and Chang’e, in addition to the gigantic radio telescope dish ‘Sky Eye,’ and large aircraft manufactured in China.

The former residence of Zhou Gongzhi is located in the Yingxiongwan Village of Jiulongpo. He was an early Communist Party leader of the Sichuan Provincial Party Committee but died heroically in Chongqing aged 29 in April 1928. Following a restoration project, the former residence has become a popular red tourism attraction and rural travel destination.

Chongqing Zoo is a large 4A rated attraction and is listed among the twelve urban-based scenic spots in the municipality. Chairman Mao Zedong once made a personal visit back in 1958, which lives on in older Chongqing generations’ childhood memories.

The park covers  ​​45 hectares, which features more than 30 enclosures home to over 260 species and 4,000 animals. Each year, 3 million tourists visit to experience the harmonious co-existence between man and nature.

At present, Jiulongpo is carrying out the formerly abandoned Zhongliang Coal Mine transformation into a sight for cultural tourism. The cave reaches 67 kilometers in length and over 600 meters underground. Upon completion, the project will become a model in urban ecological tourism.

Huayan Tourist Area covers over 1,600 mu on the east side of Zhongliang Mountain, integrating hills, water, forests, caves, and temples. This national 4A rated attraction, known as the spiritual heart of Banan Country, is among the ten largest forest areas in China’s southwest. Huayan Temple is one of the twelve new Bayu scenic spots of Chongqing and is most recognizable for the large golden Buddha that sits within the confines.

Yangjiaping Business District has been upgraded to offer more places of interest such as the Jiulong Gate, and a high-quality shopping environment led by the introduction of Mixc City, a large scale five-star mall that boasts numerous luxury brands, one of three such centers in Chongqing.

The 4A rated Chongqing Jianchuan Museum was set up in the nationally protected War of Resistance Munitions Industrial Site, which originally produced air-raid shelters. The museum is built inside a cave that features 9 themed pavilions and 1 visiting exhibition. There are over 100,000 cultural relics, 116 of which are nationally recognized as first-class.

Chongqing Fine Arts Park features a large-scale graffiti street that belongs to the Yangtze Bay Area of Culture and Art. The Sichuan Fine Arts Institute was established in this area, which has become a mecca for contemporary Chinese art and innovation.

With the Huangjueping campus of SCFAI at the core, the Power Plant Industrial Culture Area as the link, and the Jiulong Riverside Ecological Area as the pole, they are building a park with borders where members of the public will be able to participate widely.