Chongqing- Dianjiang County is a centrally located transportation hub set between the Three Gorges, Chongqing Urban Area, the Sichuan-Shaanxi borders to the north, and Hunan-Guizhou Provinces beyond the Yangtze River. The county draws spirit from the ancient Ba Country upriver and looks on towards the magnificent scenery of Kuimen and Wu Gorges. 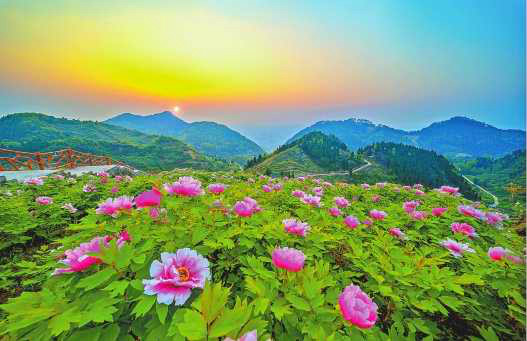 Once part of the Ba Kingdom during the Spring and Autumn Period, Dianjiang later became part of Ba County in the Qin Dynasty, before it was known as Linjiang County over the Han and Jin. Finally, Dianjiang was established as a county in the third year of Emperor Gong in the Western Wei Dynasty (556 AD), more than 1,460 years ago.

Dianjiang has grown over millennia to the backdrop of peony flowers. While the county has been a major grain-producing area and population center since the times of ancient Bayu, peony flowers were first planted here in the time of Emperor Wu during the Han Dynasty.

While peony cultivation goes back nearly 3000 years, prestigious titles of Dianjiang include the Peony Homeland of China, Ba Country Breadbasket, and the Hometown of Chinese Stone-Ground Bean Curd. 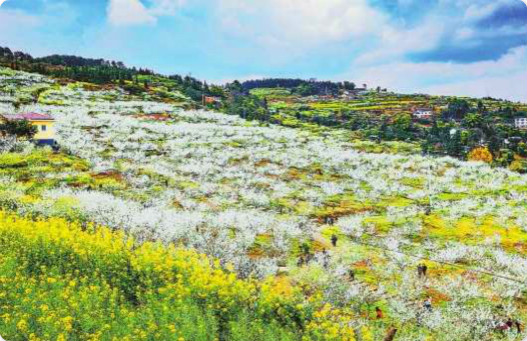 A field of plum blossoms in Dianjiang.

Today, Dianjiang is firmly seizing the historical opportunity presented by the construction of the Chengdu-Chongqing Twin City Economic Circle, as the county has integrated into the region while focusing on strategic advantages led by the digital economy.

The deep integration of agriculture, business, and cultural tourism in Dianjiang will further the goals of high-quality development, and promote balanced construction within the economic circle under the concept of One Zone Two Clusters.

In October, autumn colors embellish the picturesque Dianjiang landscape 800 meters above sea level on Mingyue Mountain, where tourists settled in the numerous guesthouses chatter gleefully around the communal fire. Meanwhile, sounds of guitar music and laughter merge in harmony as everybody savors the local delicacies over wine and stone-ground beancurd. 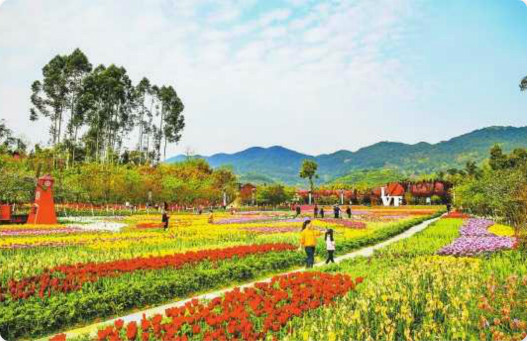 Jin Dynasty poet Tao Yuanming eulogized Dianjiang in his works, where he vividly depicted this idyllic faraway land that continues to fulfill the popular image of an ideal life.

Heyou Town is where Dianjiang is striving to create a model destination suitable for living, business, and tourism. At the Crane Ecological Wetland Demonstration Park, the aim is to build an artificial wetland centered around the lotus flower and supplemented with a variety of other aquatic plant life. By the waterside, flocks of crane soar past cruise boats in a picture of harmony between man and nature.

Mudan Village is the top place to view peony blossoms over April and May, along with Taiping Lake, Wuzhi Island, and Kaizhifeng Peony Cultural Park on Mingyue Mountain, where the floral magnificence leaves tourists short of words to describe a scene that entices them to stay behind longer. 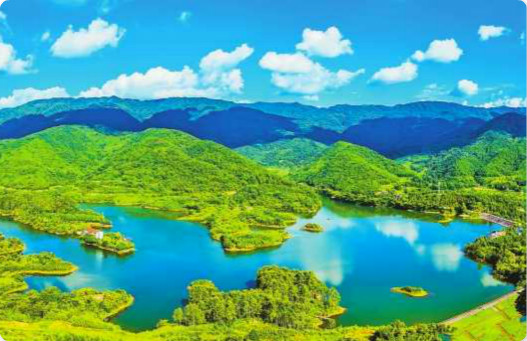 Dianjiang Peony flowers come in over 60 varieties that exude the red nuances of scarlet and rose amongst the mountain backdrop featuring waters, rocks, and forests. The high aesthetic value satisfies the common desire for natural ecology and a return to the basic simplicities of life.

According to legend, the painter Gu Kaizhi of the Eastern Jin Dynasty once traveled to Dianjiang, where he first set eyes on the beautiful scene of peony flowers. On his return to the dynasty capital, he created the artist treasure known as the River Goddess Ode.

Dianjiang is promoting green development in the Chengdu- Chongqing Economic Circle with a reliance on the cultural tourism resources of peony fields, natural salt baths, and health care. At the center are the Mingyue Mountain Green Development Demonstration Area and Wolong Salt Bath and Hot Spring Health Tourism Demonstration Base. 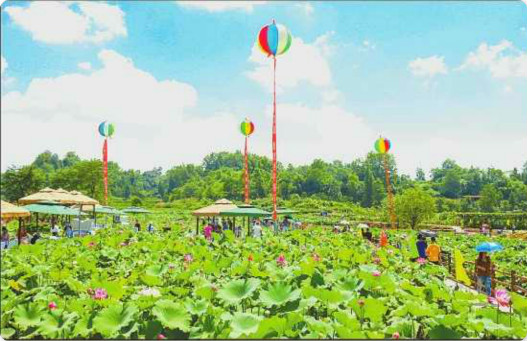 Cultural tourism in Dianjiang is integrating across multiple industries. For example, leisure tourism is undergoing rapid growth as ever more agricultural experiences include fruit planting, picking, and tasting activities.

Dianjiang is actively promoting construction as a ‘sponge city’ that incorporates effective management of water resources, with a focus on a 5 square kilometer core area in the Eastern New Area. 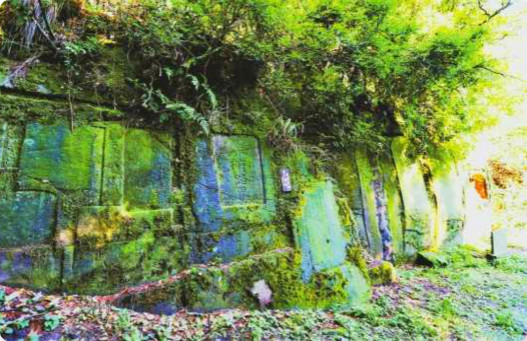 As of May 2020, a total investment of about 1.83 billion yuan has been finalized; of which 57 million yuan is earmarked for the renovation of antiquated communities as part of sponge city and green upgrade projects.

As a result, Dianjiang has established itself as a National Garden County, marking a national standard in urban planning and landscape construction.

In recent years, the emphasis has been placed on the construction of 7 city parks and over 100 hectares of urban green spaces, a project that has allowed the city to expand in harmony with the natural backdrop of green mountains and clear waters. 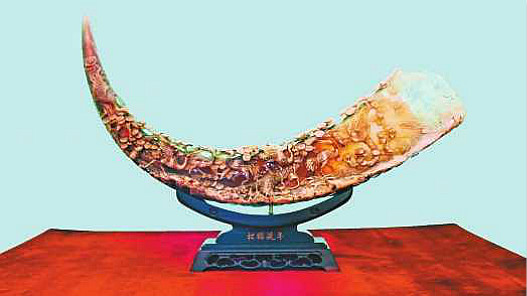 While green urban development promotes a high-quality lifestyle for body and mind, a digital legend is in the ascendency.

Chongqing Jieli Wheel Manufacturing is located in the Dianjiang County Industrial Park and enjoys the largest market share of aluminum wheels in China. Staff performs inspections through a mobile phone application to realize whole chain tracking management, an endeavor that saves on both time and effort. At the same time, they can verify the status of the operation of all equipment in detail through the background software.

Neither is the smart management of Chongqing Jieli an isolated case. The Smart Water Conservancy Project of Yuanyicheng Big Data Technology uses visualized real-time monitoring of rivers, reservoirs, and lakes so that managers can remotely achieve effective flood control and drought resistance, thus protecting water ecology in the county. 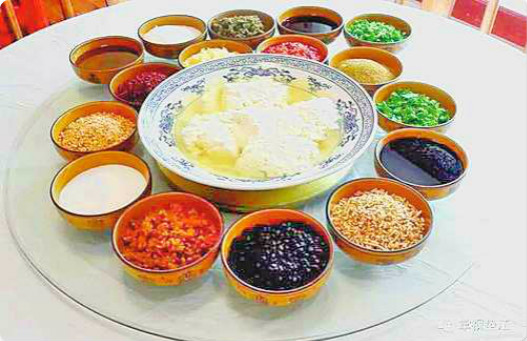 Dianjiang may be a county of traditional agriculture, yet it is embracing the new digital economy with open arms, as cloud technology moves gradually from dream to reality.

In recent years, Dianjiang has taken the initiative as the National Digital Economy Innovation and Development Pilot Zone has been constructed in Chongqing. 99.98% of small, medium, and micro enterprises have been focused in the area to empower intelligence through cloud and data technology, and heighten ecological quality in the Mingyue Mountain Green Development Demonstration Belt.

Over 10 leading companies in big data have been attracted to Dianjiang. In the case of Yuncheng Technology, their estimated value rocketed from zero to 600 million Yuan within half a year. 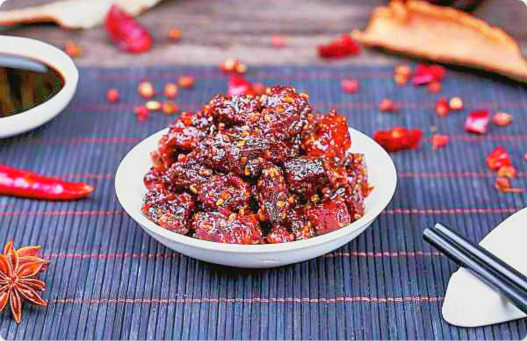 Chongqing Dianjiang Software Park is a high-quality construction project, developed in cooperation with the Ministry of Industry and Information Technology CCID Research Institute, and China Agricultural University to explore the use of digital application scenarios for the integration of production, education, and research.

The digital industry and economy are intrinsically green in nature. Since the launch of the digital economy, Dianjiang has concentrated efforts to realize the pilot tasks of an inclusive industrial internet, digital finance, and urban governance through big data.

100% of industrial enterprises in Dianjiang are now cloud linked, while 606 enterprises in the jurisdiction have broken ground to operate on the same network through 29772 devices. 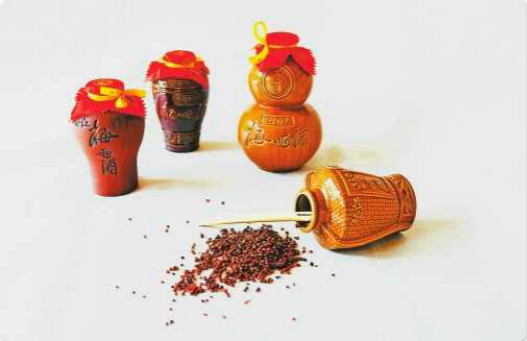 Full coverage has been achieved in the agricultural and service industries as the number and deployment efficiency of online cloud enterprises reaches new heights, Dianjiang has become a national leader in the field.

Dianjiang horn carvings are an exquisite handicraft made with traditional Chinese folk hand-carving techniques. White ox horns from southern China and Southeast Asia are used as the raw material, which features a variety of patterns through carving and hollowing techniques. 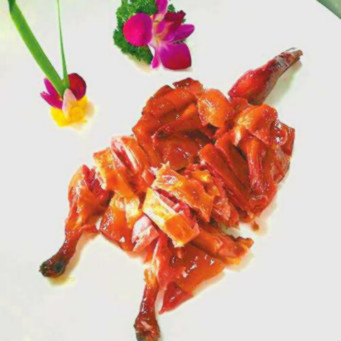 Dianthus weaved artwork is made from local bamboo that is first treated through cutting, scraping, fragmenting, steaming, boiling, dyeing, washing, and mothproofing. According to the desired patterns and colors, the bamboo is carefully woven and decorated by hand through over 10 steps, such as boiling in alkaline water and dyeing.

The recipe and production of Dianjiang stone ground tofu have unique historical origins. The delicacy is also known as tofu nao or bean jelly and is formed by curdling soybean milk.

Dianjiang beef selects the freshest meat that is processed through traditional crafts and a unique recipe. The product is made in accordance with strict quality standards and goes through high-tech irradiation to maintain freshness without the need for preservatives. Dianjiang beef has a dark brown luster and tastes delicious for its tender and rich flavor. 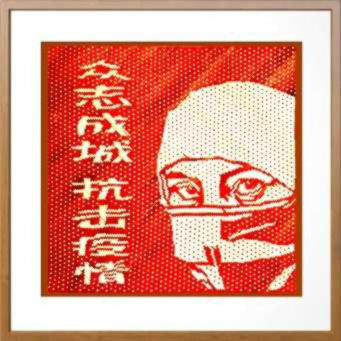 Dianjiang Steamed Duck is made from free-range birds and pure natural spices using a strict twelve-step process. The unique selection of ingredients and production methods ensure the product is golden in appearance, while the fragrance is tender, juicy, and aromatic.

Pure natural sorghum is the main raw material of Dianjiang wine. Following a steaming process, yeast is added before the mixture is sealed in earthenware pots to ferment the sweet wine. This sipping wine is light, with an original flavor that is sweet and refreshing. Dianjiang wine has long been a famous specialty and business card for the region.