The signing ceremony and opening activity for YYeTs to settle its headquarters in Chongqing kicked off at IoT Zone, Nan’an District, on October 13. YYeTs will transfer its overall business to Nan’an District and Chongqing Economic and Technological Development Zone (CQETDZ) and go public through the Chongqing headquarters in China or abroad. On top of that, it will implement the plan for building a five billion-level production-scale digital content exemplar in the two aforementioned areas in three to five years. 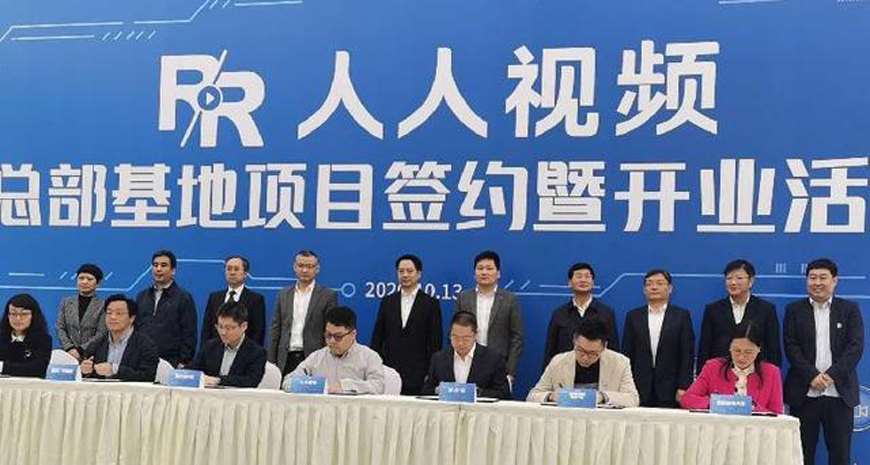 The signing ceremony and opening activity for YYeTs to settle its headquarters in Chongqing kicked off at Nan’an District on October 13.

As the 5th largest online video platform, YYeTs boasts 160 million users, with over 40 million monthly average users and nearly 200 million domestic followers on new media platforms such as Douyin. It is also the company with the most contracts with overseas MCN institutions, dominating over 120 million fans abroad.

By making the most of the opportunity of the Chengdu-Chongqing economic circle, YYeTs will invest more in Chongqing and move forward at an accelerated pace in digital content and cultural development. Following the successful signing, YYeTs will set up its headquarters, settle its overall business in Nan’an District and CQETDZ, and go public through the Chongqing headquarters in China or abroad.

Zhou Weimin, Chairman of YYeTs, said more moves would be taken. The company will expand its existing production and operation of TV and films and its presence in new media platforms and make full use of advantages in its deep cooperation with foreign MCN institutions to promote and spread Chinese culture in the form of videos on mainstream foreign social media platforms. Following its settlement in Chongqing, YYeTs will accelerate the incubation of net celebrity bases by virtue of its own resources, and increase the production of internet TV series and films, to drive the cluster of upstream and downstream industry chains and to create a digital content industrial park with international influence. Additionally, the company will implement the plan for building a five billion-level production-scale digital content exemplar in Nan’an District and CQETDZ in three to five years. That will boost the rapid development of digital content industries in Chongqing, enrich the new business forms and models of the digital economy, and support the city’s ambition to build into a “powerhouse for smart manufacturing” and a “famous smart city.”

Nan’an District Mayor Chen Yiqing expressed that YYeTs’s move to settle its headquarters in Nan’an District and CQETDZ will accelerate the development of industries including digital content and entertainment of the two areas, achieve breakthroughs in the regional internet video industry, boost the development of China Intelligence Valley (Chongqing) Science Park and promote the high-quality development of digital economy in Chongqing.