Chongqing- One million years ago, prehistoric humans used their ingenuity and diligence to create Paleolithic hand axes in this area, which marked the beginnings of civilization mark in Chongqing. 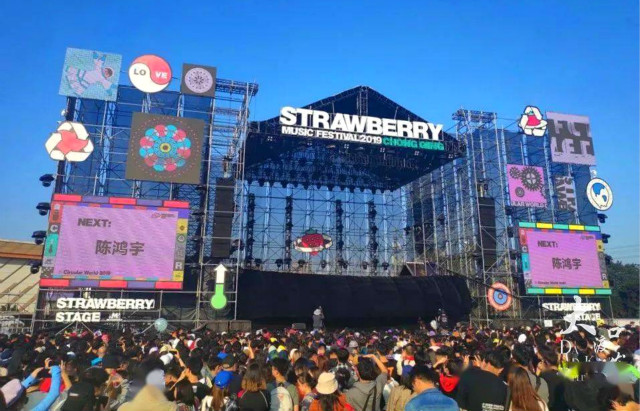 The first Strawberry Music Festival was held in Dadukou.

During the Warring States Period, the people of Ba Country established a city on the north bank of Guiting, where they established the first prosperous street market in Chongqing.

In the reign of the Qing Dynasty emperor Daoguang, the gentry built the magnificent ferry port of Yidu, which provided a vital point for crossing the Yangtze River and the only port within dozens of miles. Later, the district name of Dadukou originates from this fact.

In 1938, the Hanyang Ironworks relocated westwards to Dadukou against the river current, a feat which created a lifeline for the national industry, as well as providing the mainstay of steel supplies during the War of Resistance. 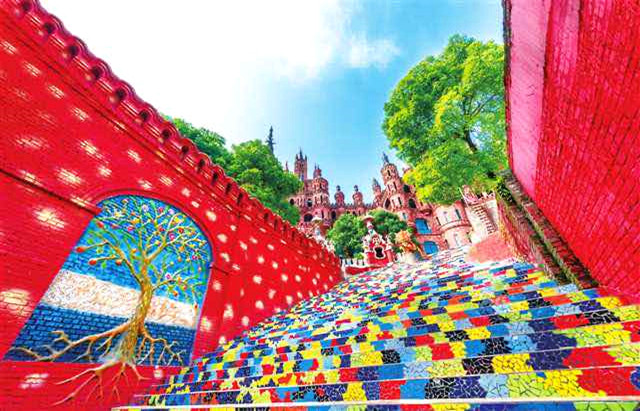 The Huashengyuan Castle attraction in Dadukou.

In 2011, Chongqing Iron & Steel relocated outside the city for the cause of blue skies and clear waters, a deed that reflects the historical comings and goings in Dadukou and the magnanimity of its people.

Now, the blueprints for Diaoyuzui Music Peninsula have been drawn, and the wonderful scene of Yangtze River Culture and Art Bay Area is slowly unfolding. This endeavor carries the spirit behind this ‘land of benevolence, city of virtue,’ and will denote a musical chapter in high-quality industry and desirable living quarters in Dadukou.

The treasure of the Dadukou District Museum is undoubtedly the Mawangchang hand ax. The lower part of the stone hand ax retains its rounded shape, while the upper part is sharp and jagged. The difficulty involved in making this tool would have been extremely high, and the complexity allows us to admire the diligence and wisdom of ancient humans. 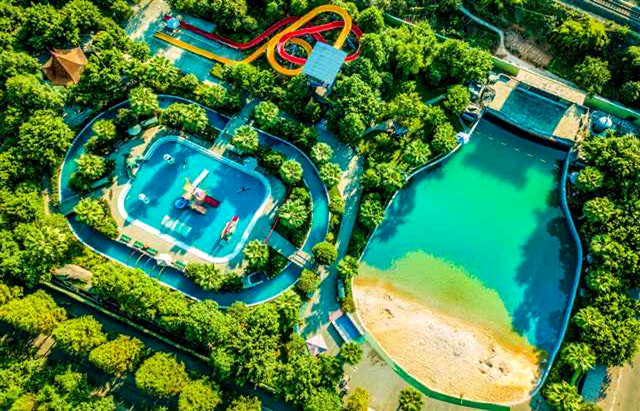 Outside the museum facing towards the river, Yidu Ancient Town comes into view. Ferries once arrived and departed at this location in ancient times, where the river waters flow gently to the backdrop of mountain scenery.

In the reign of the Qing Dynasty emperor Daoguang, the common people experience great difficulty in crossing the river. So the Mawang gentry offered a strip of land to build a ferry port that offered the boat crossings free of charge. The operating expenses hired boatmen and ferries were paid through annual rental income.

According to estimations, about one thousand people crossed the Yangtze River in either direction each day. For a time, the ferry service scale was magnificent and was a gathering place for merchants from miles along the river. The name of Dadukou originates from this port and actually means a large ferry port. 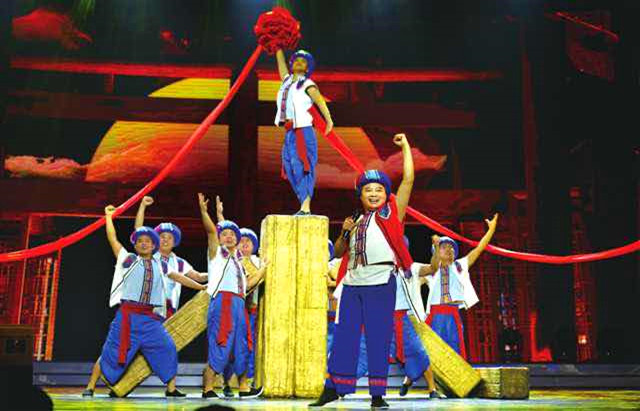 Dadukou is fast becoming a major center for performing arts in China.

Yidu Ancient Town has undergone a thorough restoration in the original location. The original dimensions, foundations, and characteristics have been reproduced to form the historical three-street and nine-lane structure. The landscape and town streets have now regained their former charm and appeal on the Yangtze River’s upper and middle reaches.

In the ancient styled home-stays, you can taste authentic boat food in the company of hospitable owners. Come nighttime, let go of exhaustion and daily tribulations, glance up at the starry skies, and sleep by the riverside with the sense of being a wandering son in faraway lands.

Alongside the ancient town streets lies the old Chengdu Chongqing Railway, the first built after the founding of New China. It once functioned as transportation but now embodies the nostalgia of generations in Sichuan and Chongqing. 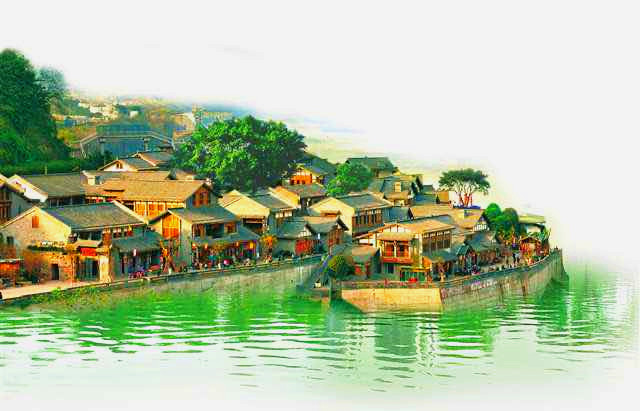 Yidu Ancient Town was founded by the gentry to offer river crossings free of charge.

In 2019, a reconstruction project of the line between Chongqing and Jiangjin was launched. In the near future, citizens will be able to board the green trains and enjoy the beautiful river scenery as if traveling through a landscape painting.

Hanyang Iron Works was established in Wuhan’s city in 1890, as the Chinese steel industry began to make great leaps. At a critical juncture during the War of Resistance in 1937, the Steel Relocation Association was set up to relocate Hanyang Iron Works to Chongqing Dadukou to preserve China’s modern industry.

Over the War of Resistance, the iron and steel industry in Chongqing accounted for up to 90% of national output and contributed to ultimate victory. The ironworks laid the industrial foundations of Chongqing and enjoyed the honor bestowed in the saying ‘An’gang lies to the north, Chong’gang (Chongqing Steel) lies to the south.’ 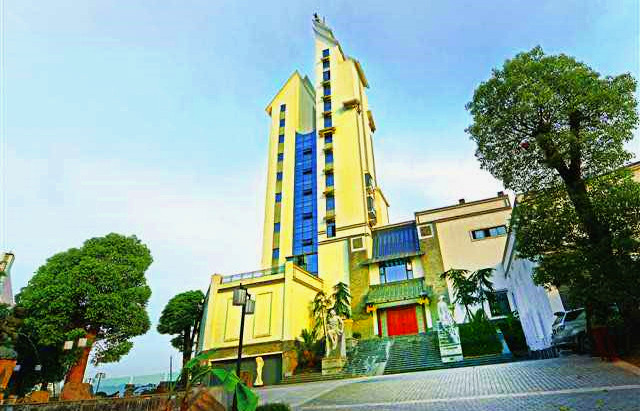 Dadukou has formally established as a district in 1965, thanks mainly to the heavy steel industry. Later in 2011, the iron factory was relocated outside the city limits in the interests of environmental protection.

However, to preserve this precious example of industrial heritage, Dadukou District and Yufu Group retained the buildings with their original characteristics to build the Chongqing Industrial Culture Expo Park and Industrial Museum, which opened their doors in September 2019.

The 8000-horsepower two-cylinder horizontal steam engine named ‘Zhenguanzhibao’ was manufactured by Tisette David Brothers in Sheffield, England, in 1905. It also became the first engine to power the steel rolling industry in China, representing the world industry’s heights at the time. 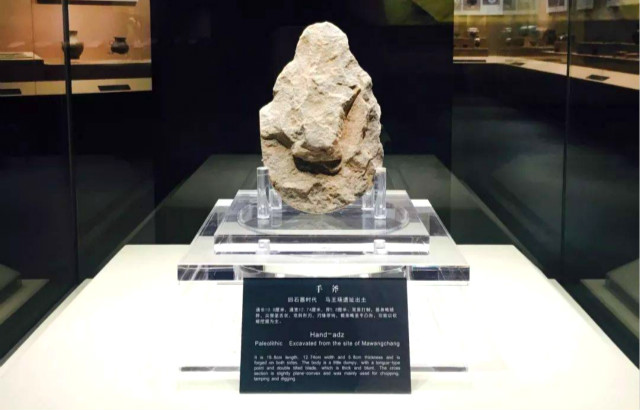 In 1950, the first steel rails in New China were successfully trial-produced using this power source. A few years ago, Britain’s enthusiasts offered to purchase back this old steam engine at a high price but were politely declined.

The Steel Soul Pavilion is located on the former sites of the Chongqing War of Resistance Weaponry Industrial Cluster and Steel Relocation Workshop. Inside, specialist displays themed on popular science and the history behind the westward migration and contributions to the Resistance War.

In addition, Baowu Steel Group is to establish its Southwest Headquarters in this area of Dadukou, along with the Chongqing Campus of Baowu University and the New Materials Research and Development Center of Baowu Central Research Institute. This project will inject new vitality into this exciting location. 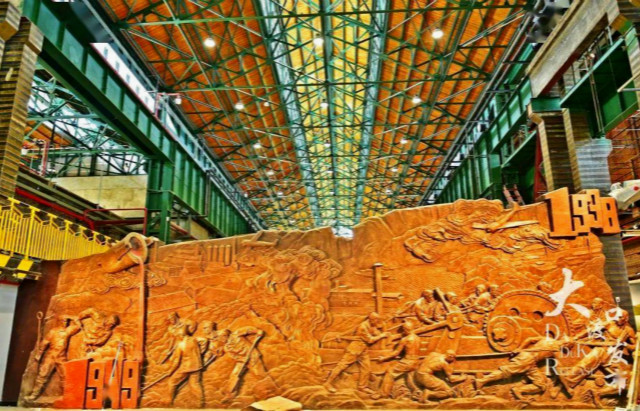 The Steel Soul Pavilion lies on the former site of Chongqing Steel before its relocation.

As the Yangtze River waters surge endlessly, Zhongliang Ridge stands tall amid the green mountains and waters of Dadukou, a poetically endowed land of picturesque scenery.

Zhongliang Mountain Ridge forms an ecological barrier and the lungs of Chongqing Urban Area. In your leisure time, you can travel to the Zhongliangshan National Forest Park in Dadukou District on your doorstep.

The forest park retains the original ecology with a coverage rate of 75.38%. In under an hour, visitors can experience the mountain winds, forest trees, roadside flowers, and the gurgling mountain springs. Come and breathe fresh air in this forest oxygen bar to refresh your body and mind. 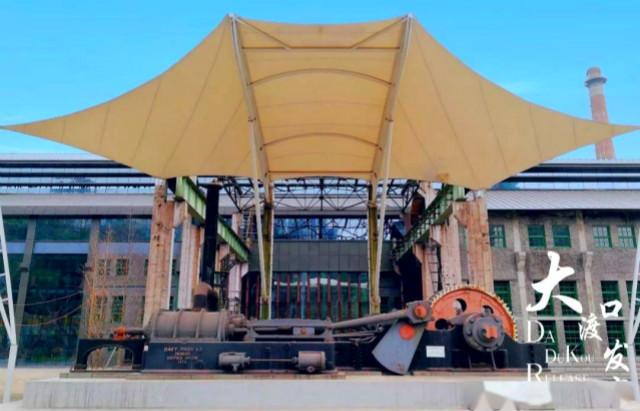 The 8000 horsepower steam engine designed by Tisette David Brothers of Sheffield can be found in Dadukou.

Nanhai Hot Springs is located at the foot of Zhongliang Ridge and offers pleasant scenery. The hot spring water comes from deep strata under the earth at a temperature of 57°C. It is rich in silicic acid and can serve as a therapeutic bath to cure ailments.

When the weather is dry, bathe in the hot spring water to relieve tension and fatigue, and soothe the body and mind. In autumn and winter, the hot springs enhance blood circulation and relax the muscles. What could be more blissful than a hot spring that is both healthy and relaxing?

Jin’ao Mountain has a temple with secluded courtyards with towering ancient trees, nestled amongst the verdant cypresses of Cangshan Mountain. When pushing open the heavy door, people suddenly gain a sense of antiquity in this mysterious and tranquil spot. 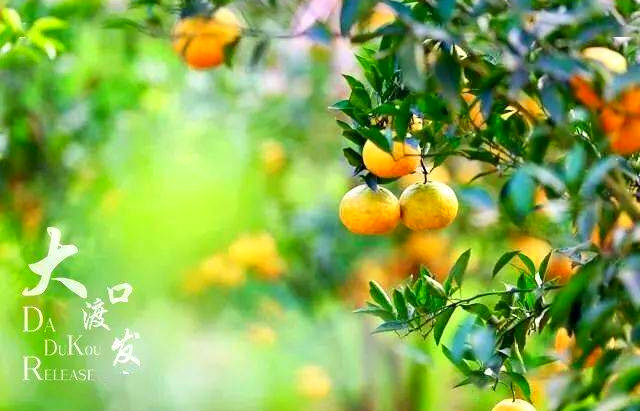 Enjoy the pleasures of leisurely fruit picking on Zhongliang Ridge.

On the eastern wall of the main temple, murals are dating from the late Ming and early Qing dynasties and the statues of Ksitigarbha Bodhisattva, which tell quietly about the distant past. This tranquil and elegant location was known as a sacred place for reading in ancient Ba County, where the magical legend of Nine Golden Scholars emanated.

According to legend, there is a well inside the temple covered with an iron plate, where if students mix ink with the water, they can scale the heights of academia. This well attracts students from across the world to draw inspiration from its glorious past.

The Nanhai Global Village is located at the foot of Jin’ao Mountain. It is surrounded by grassland and wonderful scenery, where groups of people enjoy their leisure time over cups of tea. There are also popular activities such as grass sliding, fishing, and leisurely picking chrysanthemum as Nanshan lies in the distance. 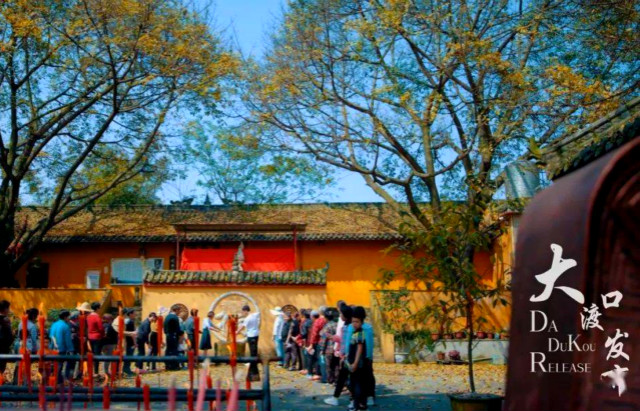 Students across the world come to the well of Jin’ao Temple for academic inspiration.

In Shipan Village by the Yangtze River on weekends, there are Paleolithic sites to explore and vegetable gardens and orchards where visitors can experience the joys of picking loquats, peaches, plums, grapes, and citrus fruit.

The Yangtze River has flowed gently around the Dadukou peninsula for millions of years. The district has 36 kilometers of precious riverbanks and the first peninsula of Chongqing Urban Area known as Diaoyuzui, which still awaits development.

According to the Two Rivers-Four Banks plan of the Municipal Government, Diaoyuzui Peninsula in Dadukou District is designed to become a musical peninsula, while the peninsula of Jiulongpo District is set to become a center for arts. As a pair, the two locations will constitute the Yangtze River Culture and Art Bay Area. 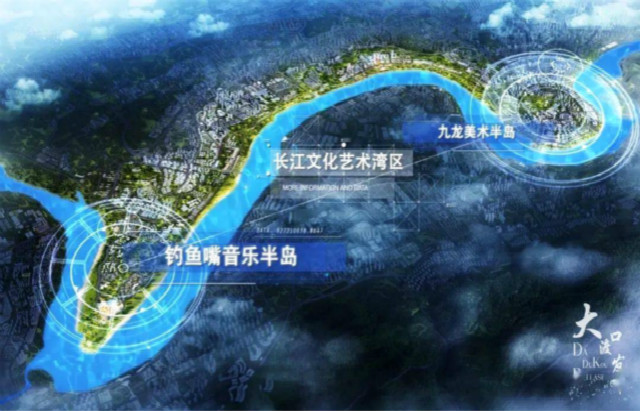 The two peninsulas of Diaoyuzui and Jiulong will jointly form a center for artistic performance and excellence.

The Yangtze River Culture and Art Bay Area has a total length of about 25 kilometers, of which 18.4 kilometers is in the Dadukou area, including the former site of Chongqing Steel, Yidu Ancient Town, Zhongjiao Wharf, and the Diaoyuzui Peninsula.

Diaoyuzui Peninsula will focus on major functional projects such as halls, institutes, museums, squares, and stages. The Yangtze River Concert Hall is planned to occupy the most scenic vantage point. The project has been listed as a key public facility, and the initial stages are being widely promoted.

The Conservatory of Music will meet the benchmark against world-class standards and will enter into cooperation with domestic and foreign music academies to establish a high-level training base for talented musicians. 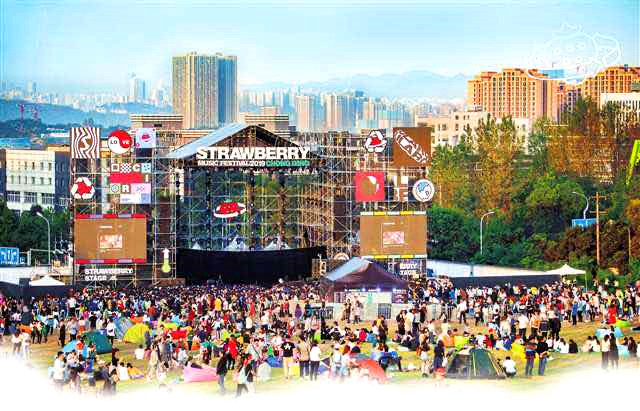 The Strawberry Music Festival is to be held yearly in Dadukou, along with other major events.

The Changjiang Music Plaza, Camp, and Stage will begin construction to transmit urban music and cultural gatherings as part of a new cultural landmark to display Chongqing as an international metropolis.

In October 2019, the first Yangtze River Strawberry Music Festival opened in Dadukou. More than 30 groups of musicians took turns on stage and attracted over 30,000 enthusiasts to enjoy the feast of music.

Thanks to the Strawberry Music Festival’s success, which has become a top musical event nationally, the event is to be held regularly in Dadukou every year. At the same time, Dadukou has attracted the Spring Wave and Midi Music Festivals, putting the district firmly on the map of China’s musical performance events.

In September 2020, Dadukou District and the Sichuan Conservatory of Music signed a strategic cooperation agreement. They held an investment promotion conference in Chengdu City Concert Hall, where they released construction plans for the Diaoyuzui Music Peninsula and Music Town project.

More than 20 provincial, municipal, and district-level media organizations from Chengdu and Chongqing, and over 40 music companies attended the promotion.

The two parties will integrate high-quality resources to build the Diaoyuzui Music Peninsula into a brilliant pearl of art in the Chengdu-Chongqing Twin City Economic Circle.