Over 30 Exhibitors from Chongqing Expand Trade Channels to ASEAN

Chongqing organized 32 enterprises from eight districts and counties to the expo and set up a themed pavilion on the spot. 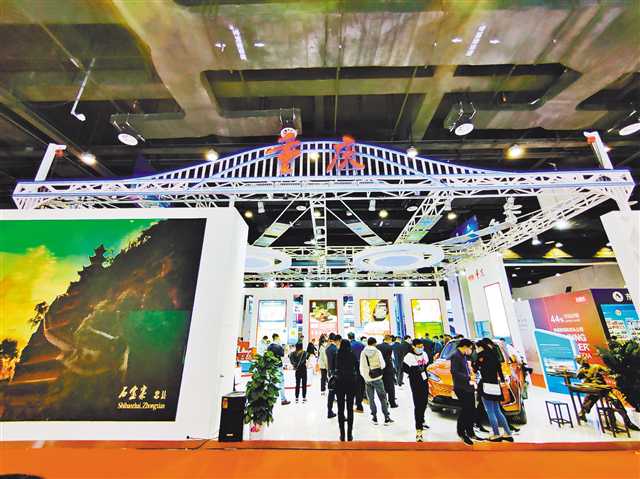 Chongqing organized 32 enterprises from eight districts and counties to the expo.

Being designed based on the concept of “opening-up” and “dual circulation”, the themed pavilion of Chongqing highlights the new achievements and contributions of Chongqing in deepening reform and opening-up, constructing big data intelligence, protecting the ecological environment, and promoting the construction of Chengdu-Chongqing economic circle.

According to Li Lijuan, Director of the Convention & Exhibition Division of Chongqing Municipal Commission of Commerce, this year’s CAEXPO covers 32 enterprises from Chongqing, the largest in history. It fully reflects the expectation and desire of these enterprises to expand the Southeast Asian market.

The city’s enterprises participating in the expo covered the automotive, electromechanical, medical, food, handicrafts, clothing, and other fields. Those enterprises included Jinkang Seres, Zybio Inc., and other well-known enterprises.

Li introduced that Chongqing serves as the first special partner of CAEXPO in southwest China and has participated in the expo for 17 consecutive years.

It conducts extensive cooperation with ASEAN countries in fields like economy and trade, culture, and tourism. Starting from 2019, ASEAN became the largest trading partner (region) of the city.

Chongqing companies at the expo

At this session of the expo, Chongqing Dinggong Electromechanical Co., Ltd. from Hechuan District gained a lot. Chen Ke, the person in charge of the company, introduced that they had negotiated with four or five Southeast Asian enterprises for cooperation, and the amount of intention agreements had reached several million yuan.

The aim of their participation in the expo is to expand the Southeast Asian market and bring more products to the international market.

The relevant person in charge of the company said that, at present, automobiles of Sokon have been sold in 90% of the countries in Southeast Asia. In virtue of the expo, the company aims to further develop the new energy vehicle market in that region.

“In addition to the CAEXPO, there have been frequent economic and trade exchanges between Chongqing and ASEAN,” said the person in charge of the Foreign Trade Management Division of Chongqing Municipal Commission of Commerce. Exchanges between the two places involve project investment, exhibitions and conferences, logistics and transportation, and other aspects.

This June, Banan District saw the opening of the ASEAN Commodity Centralised Procurement Centre, in which Chinese and ASEAN goods can be exchanged, displayed, and traded.

In October, the 12-day ASEAN Featured Goods Exhibition was held both online and offline in Chongqing to display a variety of products from the ASEAN region such as handicrafts, frozen food, and machinery.

China-Singapore (Chongqing) Demonstration Initiative on Strategic Connectivity (CCI) is a model for cooperation between Chongqing and ASEAN countries.

By the end of 2019, under the framework of CCI, Chongqing, and Singapore had signed a total of 55 various cooperation agreements and 204 cooperation projects with a total value of USD more than 30 billion.

Among them, 160 projects with a value of USD more than 20 billion had been launched, accounting for nearly 80% of the total.

The logistics channel between Chongqing and ASEAN had also become smoother. Chongqing-ASEAN Regular Lorry, for example, had operated for over 4,500 times in total, including more than 2,300 times in 2020, up 136% year on year.

Chongqing will also have closer economic and trade ties with ASEAN for two reasons below.

First, the construction of the New International Land-Sea Trade Corridor (ILSTC) continues to be advanced. This year, despite the impact of the epidemic, Chongqing still achieved 1,000 departures and arrivals of trains via rail-sea transport on ILSTC, reflecting the active economic and trade exchanges between the city and ASEAN.

The continuous construction of ILSTC will help further strengthen the economic and trade exchanges between Chongqing and ASEAN.

Under the agreement, each of the 15 member countries committed to lowering tariffs, opening markets, and reducing standard barriers. This means that it will be easier for Chongqing’s companies to do business with enterprises in ASEAN.

He Daoguo, General Manager of LJML LOGISTICS, said that they will be more proactive in “bringing in” and “going out” to import quality goods from the ten ASEAN countries and even all of the RCEP member countries, and to export excellent products to these countries.

Chongqing is actively drawing up a blueprint to seize this opportunity. Led by Chongqing Municipal Commission of Commerce, the city is drafting an action plan to deepen cooperation with ASEAN in a bid to achieve leapfrog development in economic and trade cooperation between Chongqing and ASEAN countries.

“We’re striving to complete the corresponding planning within this year, which is also a reflection of Chongqing’s positive response to the RCEP,” said the relevant person from the Asian and African Office of Chongqing Municipal Commission of Commerce.