We Invite You to Join the #KungfuChallenge Campaign

Chongqing – Chinese Kungfu is not only some fancy moves you watch in films but also helps ordinary people improve their health. iChongqing invites you to do some exercises with us by joining our social media #KungfuChallenge campaign and show your awesome skills.

We have students from the Martial Art School of Yubei District to show 3 different Kungfu moves, which are Tai Chi, Baji Boxing, and Southern Stick. You can take part in the campaign by uploading and sharing your own version of these moves from the challenge video on Facebook, Twitter, Instagram, and YouTube. Use the #KungfuChallenge, and mention us @iChongqing, and challenge a friend as well!

Here is a brief introduction to the Kungfu moves in the challenge video. Tai Chi consists of calm, soft, and slow moves that require practitioners to fully focus on it and use the mind to rule the body. Apart from its self-defense function, it will help practitioners maintain optimum health. Baji Boxing features explosive, short-range power and is famous for its elbow and shoulder strikes. Southern Stick is based on stick techniques coming from Southern Chinese martial arts. Its moves stress hitting. No matter you are an expert of martial arts, a Kungfu fan, or someone knowing little about Kungfu, we are sure there will be a style that fits for you to practice. 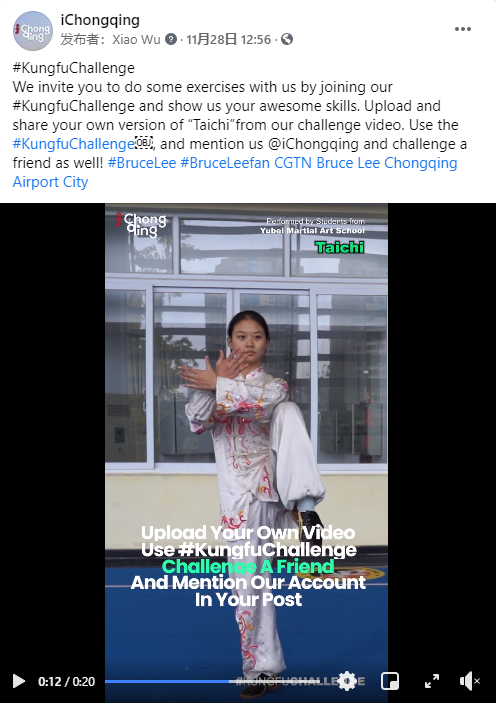 What’s more, iChongqing is going to release a mini-documentary on the hometown of martial arts – Yubei District. The documentary will introduce legendary Zhao-Style Kungfu originating in Yubei District that has been included in Chongqing’s intangible cultural heritage list.