Chongqing – Martial art is a window for the world to understand China. There are three classes of Chinese martial arts: Shaolin, Wudang, and Emei. In the city ranking of the origin of Chinese Kungfu, the Shaolin Temple ranked third, while Chongqing Yubei ranked first. Here in Yubei district of Chongqing, people still devote themselves to martial arts these days.

Born in Yubei District, Zhao Yousheng is a third-generation heir of the Emei class. He has achieved Grade Eight of Chinese Kungfu as well as being a senior referee of the Kungfu competition. He has also produced documentaries such as Bayu Kungfu Dance and worked on the promotion of martial arts education.

Zhao Yousheng is a third-generation heir of the Emei class.

His father, Zhao Ziqiu, once one of the top ten martial arts masters in China, introduced Emei Class Kungfu to Yubei in 1930 and completed the History of Sichuan Martial Arts, a monograph containing more than 800,000 words. Zhao is one of the eight boxing schools of the Emei Class, with a history of more than 200 years and thousands of apprentices.

Zhao Yousheng believes that martial arts do not teach you how to fight, but how to think, by using Chinese philosophy. He compiled this philosophy into “Wuji”, a set of moves his apprentices currently practice. The “Snake and Crane fighting”, one of the routines in ‘‘Wuji’’, was inspired by the fighting between the snake and the crane. Its movements imitate the demeanor of these animals. Its speed, position, and strength also correspond with the philosophical principles of Tai Chi, which is characterized by the notion of “flux and reflux” and the Yin-Yang theory. 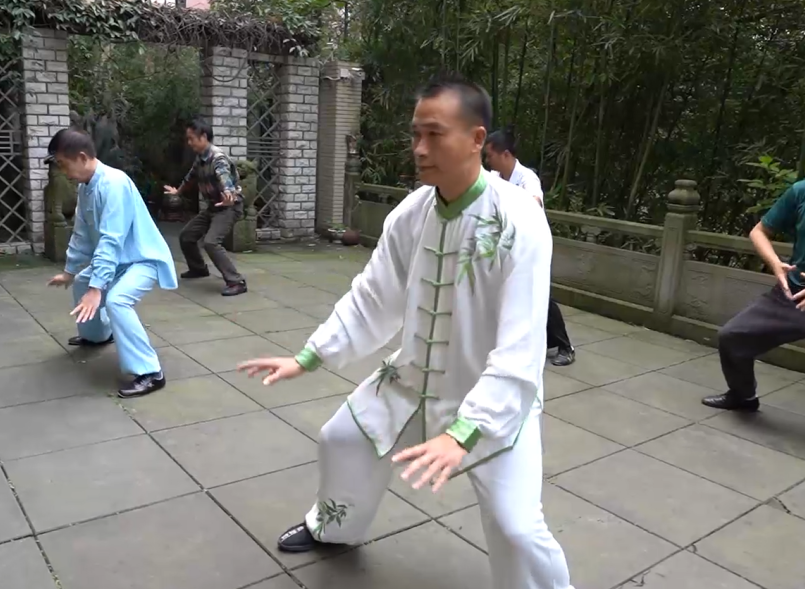 Zhao Yousheng is good at writing and drawing. He dreams of spreading Kungfu culture for a long time to come, even though he is already seventy years old now.

In Yubei, a new generation of apprentices appreciates this traditional art in their own way. Starting at the age of four, they swept trophies in various national martial arts competitions. Among them, the youngest winner is only 14 years old.

Li Rui, known as the master sister, is good at Tai Chi.

There are 68 different routines in “Zhao”, and each kid has their favorite one. Each of the children has their own unique fighting style, some use their hands and feet, others can use weapons. They all learn with and encourage each other.

Peng Qiyuan, a senior high school student who about to go to college, is good at Baji Boxing.

These young people have huge enthusiasm for their practice. They keep training every weekday after school. Li Rui, known as the master sister, is good at Tai Chi. She participated in the filming of an advertisement about Yubei with her master brother Fu Wenze this year. Peng Qiyuan, a senior high school student who about to go to college, is good at Baji Boxing. Yan Shunyao,  Peng’s classmate, is a huge fan of the early Kung Fu movies.