On March 25th, the Taxation and Human Resources Management Seminar was held in Chongqing, which jointly organized by the Chongqing Liaison Unit of the Government of the Hong Kong Special Administrative Region and Chongqing Municipal Commission of Commerce and co-organized by Chongqing Federation of Industry and Commerce with China Council for The Promotion of International Trade Chongqing Committee. A total of 306 company representatives from around 200 companies attended this seminar.

The seminar aimed to help the Hong Kong enterprises in Chongqing as well as the mainland enterprises that are interested in investing in Hong Kong gain knowledge of taxation, laws, and economic policies in the post-epidemic era, meanwhile discussing the potential opportunities and challenges from the policies to enterprises.

Li Wan In, the Director of the Hong Kong Economic and Trade Office in Chengdu (CDETO) of the Government of the Hong Kong Special Administrative Region (HKSAR), and Song Gang, the vice director of Chongqing Municipal Commission of Commerce delivered speeches.

The opening of the seminar

Li Wan In said that by the end of 2020, investment projects from Hong Kong in Chongqing has reached more than 3,200, with an actual investment of more than 430 billion yuan. The total number of Chongqing companies listed in Hong Kong has reached 14 with a total market value of about 5 billion U.S. dollars, and the IPO financing exceeded 4.2 billion U.S. dollars. “We hope that more companies from Hong Kong will invest in Chongqing, and we also hope that more Chongqing enterprises will invest and develop in Hong Kong”, said Li. 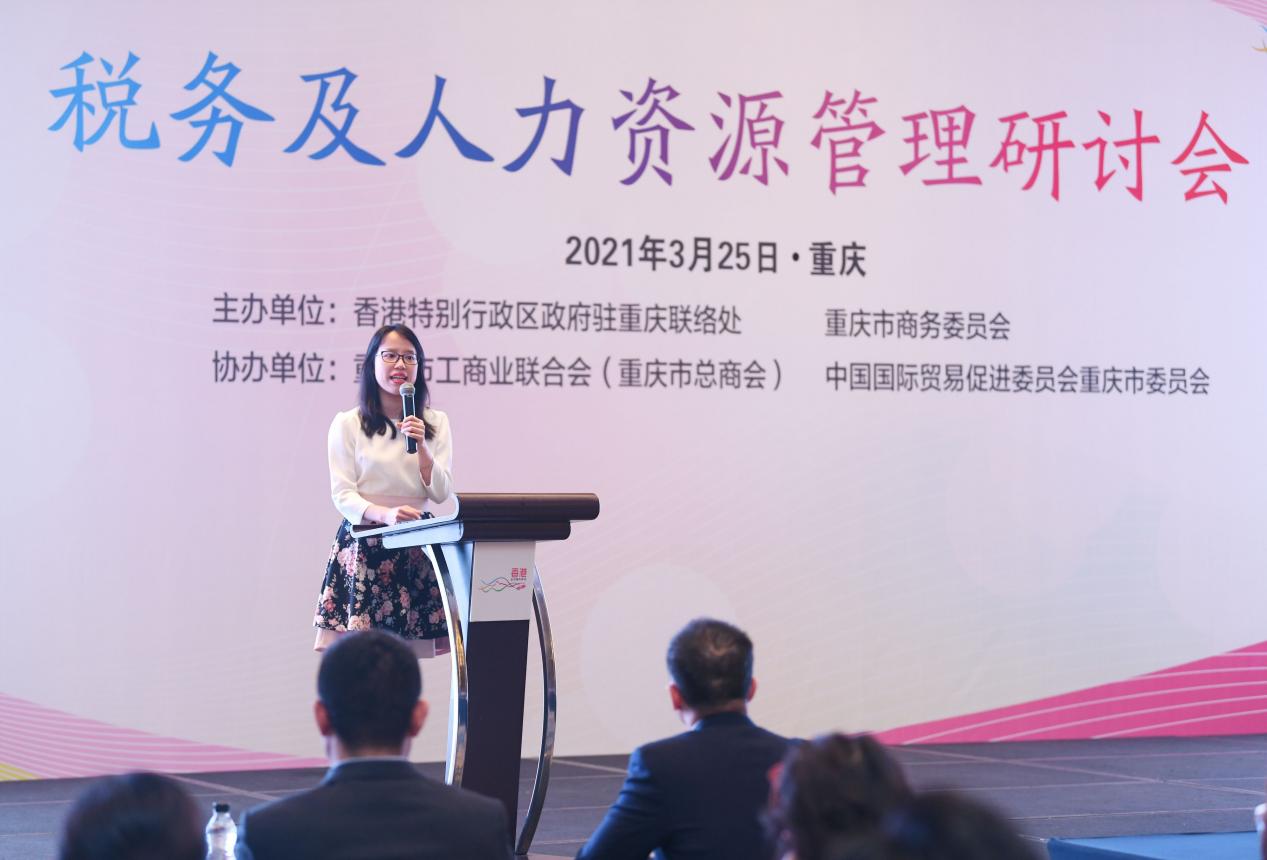 She also introduced that according to the data of the Hong Kong Stock Exchange, Hong Kong ushered in 154 newly listed companies in 2020 alone, with total initial fundraising of nearly HK$400 billion(approximately 51.6 billion U.S. dollars), and a year-on-year increase of 27%. This is the highest amount of IPO funds raised since 2010. In terms of the number of listed companies, Hong Kong ranks second in the world. At present, Hong Kong is still one of the best investment destinations for investors home and abroad.

Song Gang said that under the CEPA framework, Chongqing and Hong Kong have been continuously developing pragmatic cooperation, and formed a multi-dimensional and wide-ranging pattern of economic and trade cooperation. Hong Kong investment has always accounted for more than 50% of Chongqing’s foreign capital utilization. As of the end of December 2020, Chongqing has approved 3,208 Hong Kong-funded projects with the actual use of foreign capital of US$ 66.3 billion. The investment of Hong Kong-funded enterprises involves real estate, financial industry, accommodation and catering industries, etc., which has played an important role in Chongqing’s opening up to the outside world. 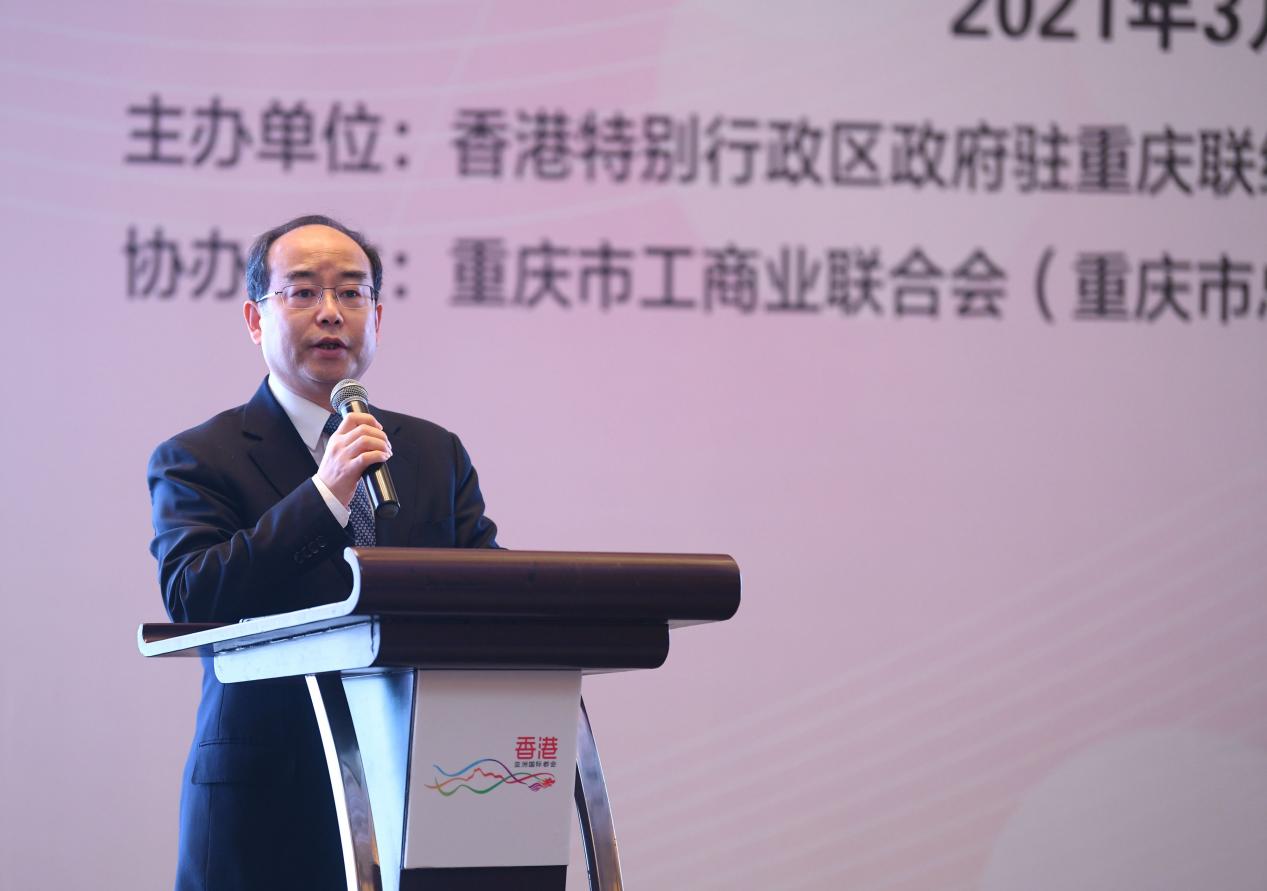 In a later interview, Li Wan In told the reporters, “Since the establishment of the Chongqing Liaison Unit of the Government of the Hong Kong Special Administrative Region in 2012, we are happy to see more and more interaction between Chongqing and Hong Kong. With the deepening communication between the two places, the investment of Hong Kong-funded enterprises in Chongqing has been more diversified. In addition to real estate, finance, catering, and service industries, the Hong Kong entrepreneurs have also been investing in TV production, advertising, media operations, Wing Chun martial arts halls, and other new commercial industries.

Taking this seminar held in Chongqing as an opportunity, the Hong Kong Economic and Trade Office in Chengdu of the Government of the Hong Kong Special Administrative Region also invited businessmen from Hong Kong-based in Sichuan to Chongqing for research. Hoping that Hong Kong can combine its advantage with the advantage of the Chengdu-Chongqing economic circle to make Hong Kong a better promoter for both the domestic and international circulation, and help the enterprises of Hong Kong seek more development opportunities.

(Wang Qianyi, as an intern, also contributed to this report.)