Chongqing- The first train to depart from Zhangye in Gansu Province as part of the New Western Land-Sea Corridor left the Zhangye Jie’an Logistics Park in northwestern China on March 30th, 2021. It is expected to pass through Chongqing on the journey towards Qinzhou Port, where the cargo will be shipped onward to Karachi.

Zhao Xiangqian, chairman of Gansu New Land-Sea Corridor Operation, conferred an institutional plaque to the logistics park during a launch ceremony to mark the occasion.

An institutional plaque was presented for the Zhangye Cargo Distribution Center of Jie’an Logistics Park during the launch ceremony. (Photo provided to iChongqing)

They successfully mobilized six 40-foot containers that were transported to the customer’s factory in Zhuangye, where the goods were loaded efficiently, and a multi-modal bill of lading was issued.

This occasion marks the first time Zhangye has realized a whole process order for container shipments through to destination, which maximizes convenience on the part of customers, and reduces the logistical costs of switching containers.

Zhao Xiangqian commented, “The New International Land-Sea Trade Corridor in western China connects the northwest to the Beibu Gulf via Chongqing, and has opened up a new channel for international trade in the western region. This is conducive to further stimulating market vitality and creating internal momentum for development.” 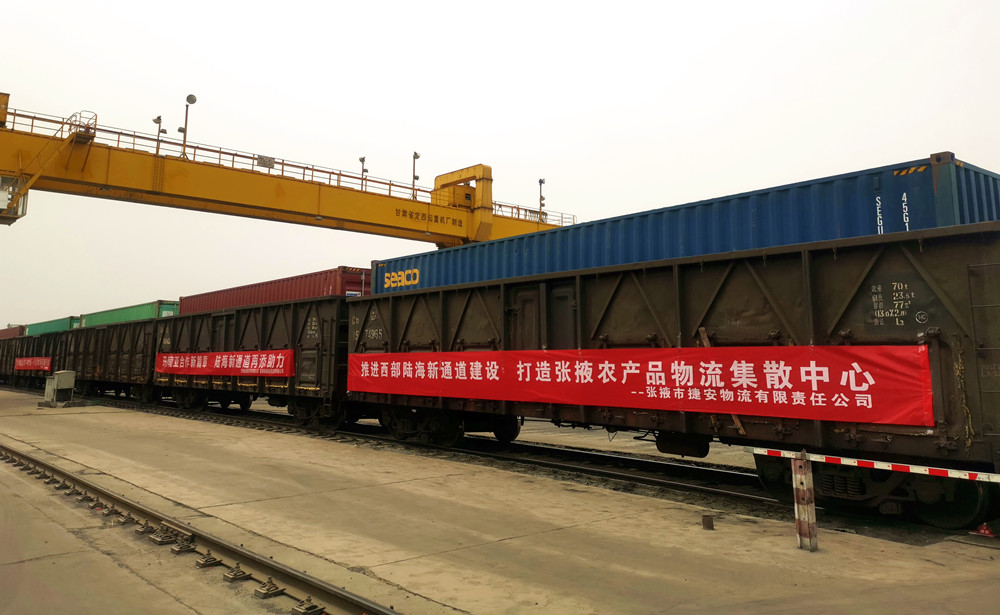 Six containers were mobilized for the Zhangye Jie’an Logistics Park despite challenges faced in international shipping. (Photo provided to iChongqing)

The Zhangye Cargo Distribution Centre of Gansu International Logistics will actively promote the integration of Gansu and serve the process of opening-up at the national level.

Additionally, it will allow Gansu Province to take full advantage of the Belt and Road Initiative through a range of pragmatic measures and help form a new pattern for opening up connections with land-sea channels and realizing multi-orientated development.

In the future, more international shipping companies will follow the development in the land-sea trade corridor, which will grant access to inland regions and serve the new pattern of domestic and international dual-cycle development.