Chongqing – The 2021 Tianyou Dairy Chongqing Changjiahui Half Marathon was fired off on Nanbin Road at 7:30 on a drizzling Sunday morning, with 18,000 professional and amateur runners soaked in a mixture of rain and sweat flexing their muscle on perhaps the city’s most beautiful riverside road.

The first prizes in both men’s and women’s half marathon programs were taken by athletes from Yunan Province. Champion runner Yang Dinghong leads the men’s group with an astounding 1 hour, 4 minutes, 36 seconds, while Zhang Kaiqin tops the women’s group with 1 hour 18 minutes 9 seconds.

Enthusiastic runners rush through the starting point of the half marathon race. (iChongqing/Truman PENG)

“I feel honored to have won the race, but, at the same time, with a bit of a regret because I was actually expecting to finish the race within 64 minutes,” said Yang Dinghong. “The first half of the race was very smooth, but I had to slowed down when reaching 14 kilometers due to a stitch that caused a lot of pain in my chest when I breathed.”

Yang had previously been in Chongqing multiple times for the Chongqing International Marathon, and this was his first experience competing in a half marathon race here. He also said that he is very impressed with the city’s beautiful landscape, especially the riverside view along the Nanbin Road, and the people here are have been nothing but friendly. 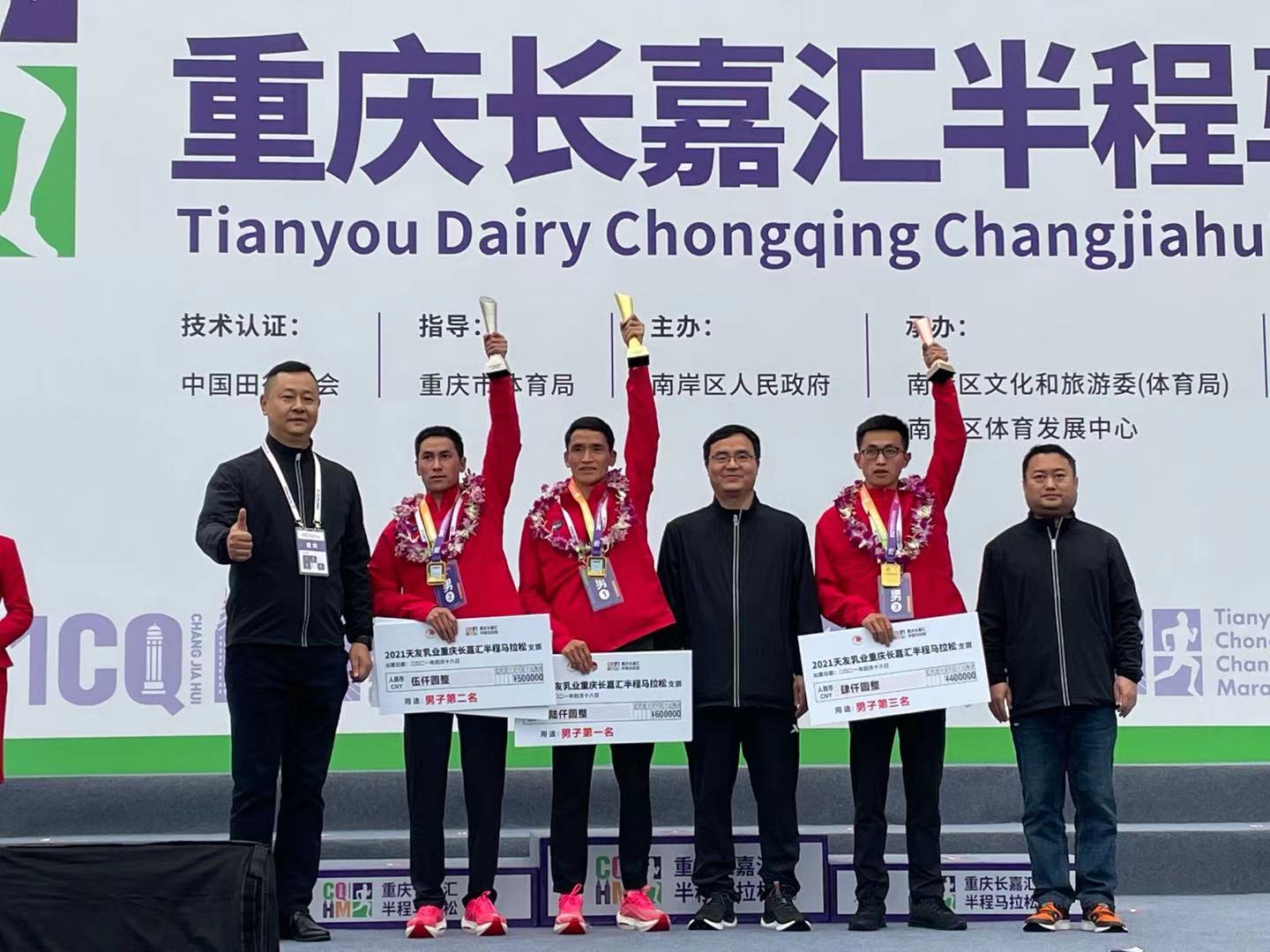 First prize-winner Yang Dingyuan (L-3), together with the other top 3 runners in the men’s group, raise their trophies while posing for a group photo. (iChongqing/Truman PENG)

“I’ve been involved with almost every major marathon race held recently, and my performances are quite stable, somewhere around 75 minutes,” said Zhang Kaiqin. “Even though I didn’t reach my personal best, I’m still very satisfied with the result.”

Zhang’s partner Zhu Renxue, who also participated in the men’s group half marathon and ended up winning the second prize with 1 hour 4 minutes 54 seconds, only 18 seconds away from champion Yang Dingyuan, waited at the finish line of the women’s group race for Zhang to come and escorted her back to the athletes waiting room. 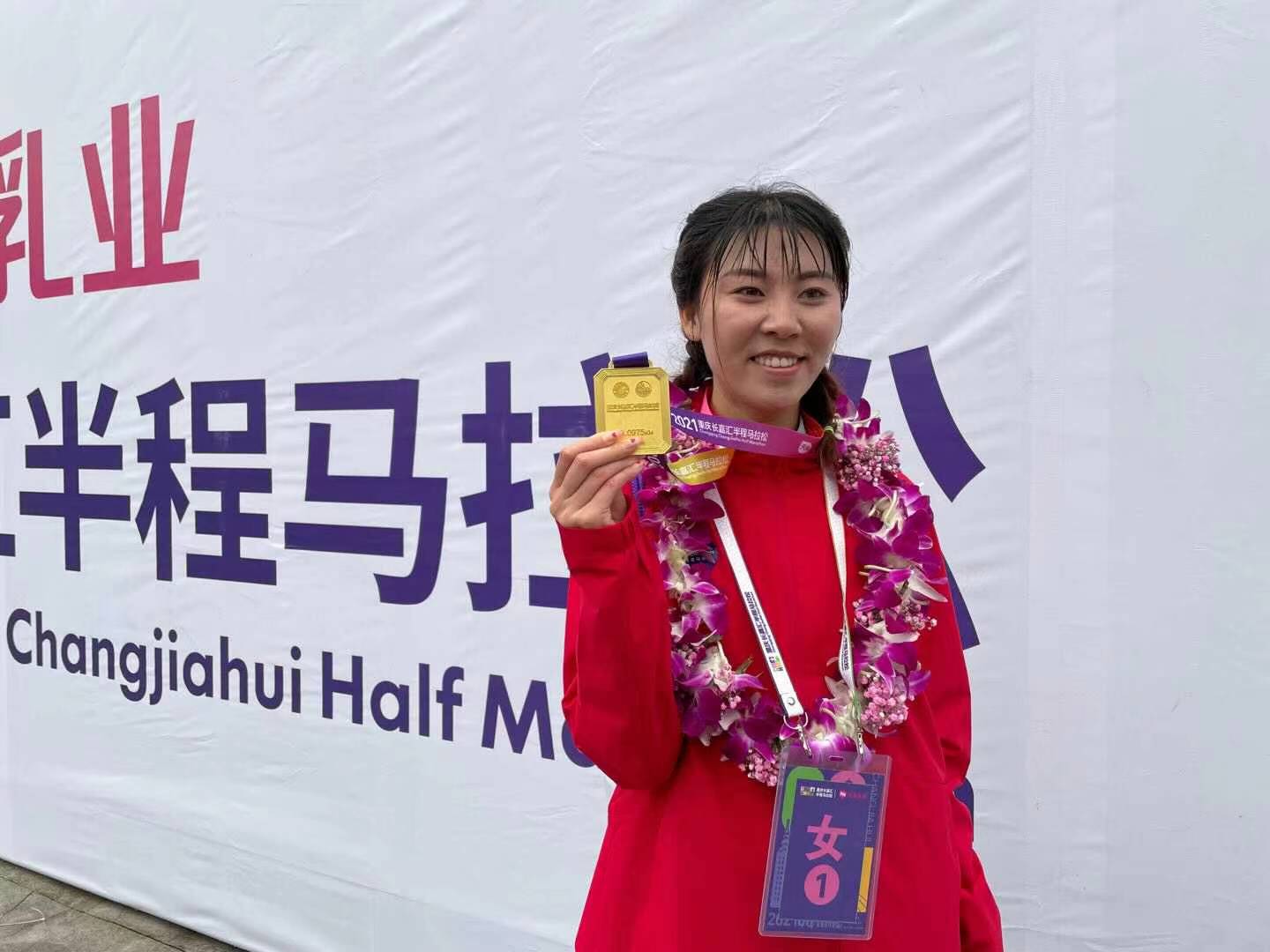 Zhang Kaiqin, champion of the women’s half marathon group, poses for a photo with her gold medal in hand. (iChongqing/Truman PENG)

The couple was jokingly referred to as the “fastest couple marathon runners” by the host and received a thunderous round of applause from the spectators for their concerted efforts in winning both the first and second prizes of the marathon race.

A total of 368 runners in the men’s half marathon group finished the race within 1 hour 30 minutes, while the number of runners in the women’s half marathon group finishing within 1 hour 45 minutes is 141, which once again proved the reputation of the Chongqing Marathon for being the “birthplace of PBs,” or personal best records. 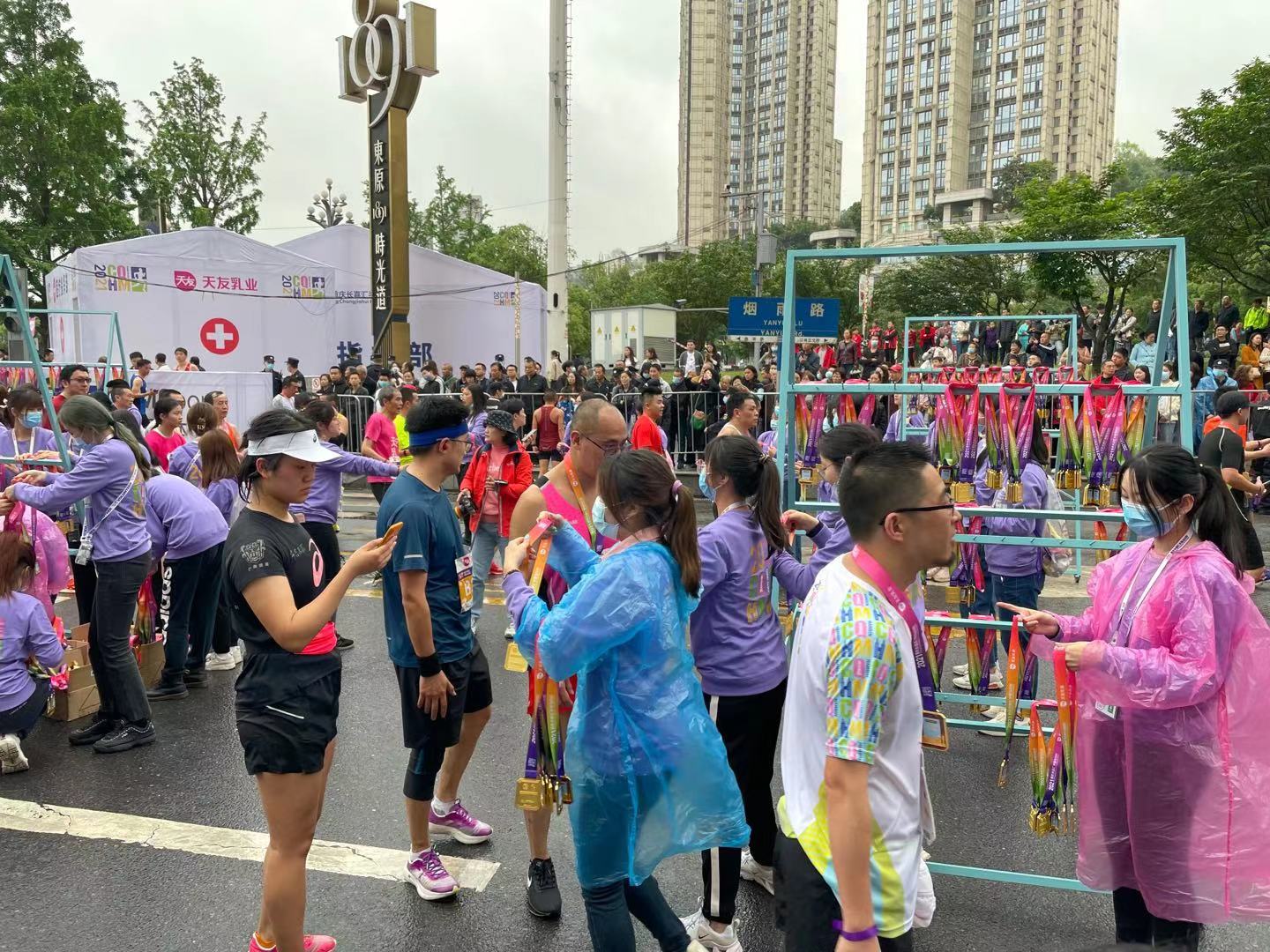 Volunteers hand out souvenir medals to runners at the checkout point of the half marathon race. (iChongqing/Truman PENG)

As indicated by its very name, the half marathon is located on the riverside Nanbin Road, starting from the landmark buildings of the Twin Towers by the Yangtze River and turning around after passing the Chaotianmen Bridge and reaching the Dafo Temple Bridge, with a perfect view of the confluence of the yellowish Jialing River and the Greenish Yangtze River.