Chongqing- Although having spent some time in Chongqing now, Chongqing, and even China, was not originally on Sean-Paul’s radar when deciding where to live and work. Through a bit of research and recommendations from others, he and his partner Kinga decided to open themselves up to the idea of coming to China.

Sean-Paul grew up in Harrow, North West London, and describes it as “a somewhat quiet, leafy suburb.” He now lives in Yubei District of Chongqing with Kinga and their two cats Lola and Loki, working as a primary school teacher at a local international school.

I Never Thought About Becoming a Teacher 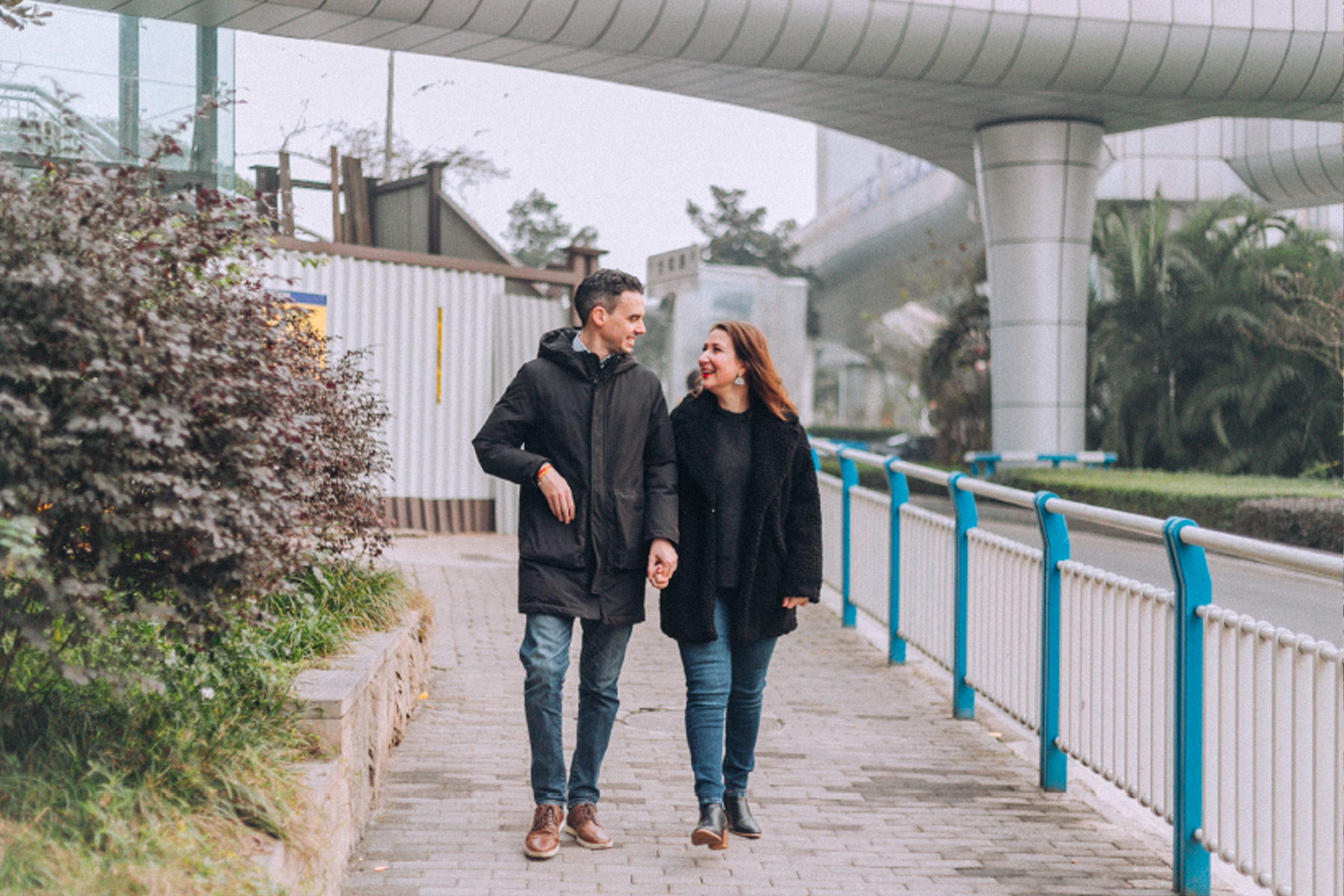 Sean-Paul and his partner Kinga out for a walk in Yubei District. (Photo provided by Sean-Paul Reilly)

Having teachers as parents, Sean-Paul never really thought about becoming a teacher himself.

‘Growing up, I never really thought about becoming a teacher, probably because both my parents were teachers and from an early age, they did their best to warn me not to be one!

It’s not because they hated teaching, but rather the teaching profession has changed a lot since the start of their careers, and to last, you really need to have a deep love for it. I think this is especially true in the UK where the majority of teachers are overburdened with work and generally underpaid for the fantastic job they do.’

After graduating from school and not being sure about what career to pursue next, Sean-Paul decided to go to the University of Manchester and study ancient history, something he was, and is, deeply passionate about. Ancient History did not lead him to a clear career path afterward, but he does not regret this decision at all. He has since then worked in healthcare and did some traveling around Asia, Australia, and America, but throughout the course of his travels had never been to China. After his travels, he decided to try teaching, despite his parent’s warnings, and volunteered at a local school. ‘I loved it and haven’t looked back since.’

Teaching in China, however, is different. Not necessarily any easier or more difficult than teaching in the UK. But because academic achievement is something that almost all people here strive towards, teachers here see a lot of support from parents and their colleagues.

‘Teaching in China isn’t any easier or more difficult than the UK; it’s just different. Due to the fact that nearly all the children I work with now have English as an additional language, a lot of what we do is based on supporting the children in improving their English so they can access all areas of the already demanding British curriculum. In the UK, working as a team was one of my favorite parts of the job, and in China, this is no different as I work closely with many fantastic Chinese colleagues. They also helped me to settle in and explore Chongqing.’

Moving to Another Country 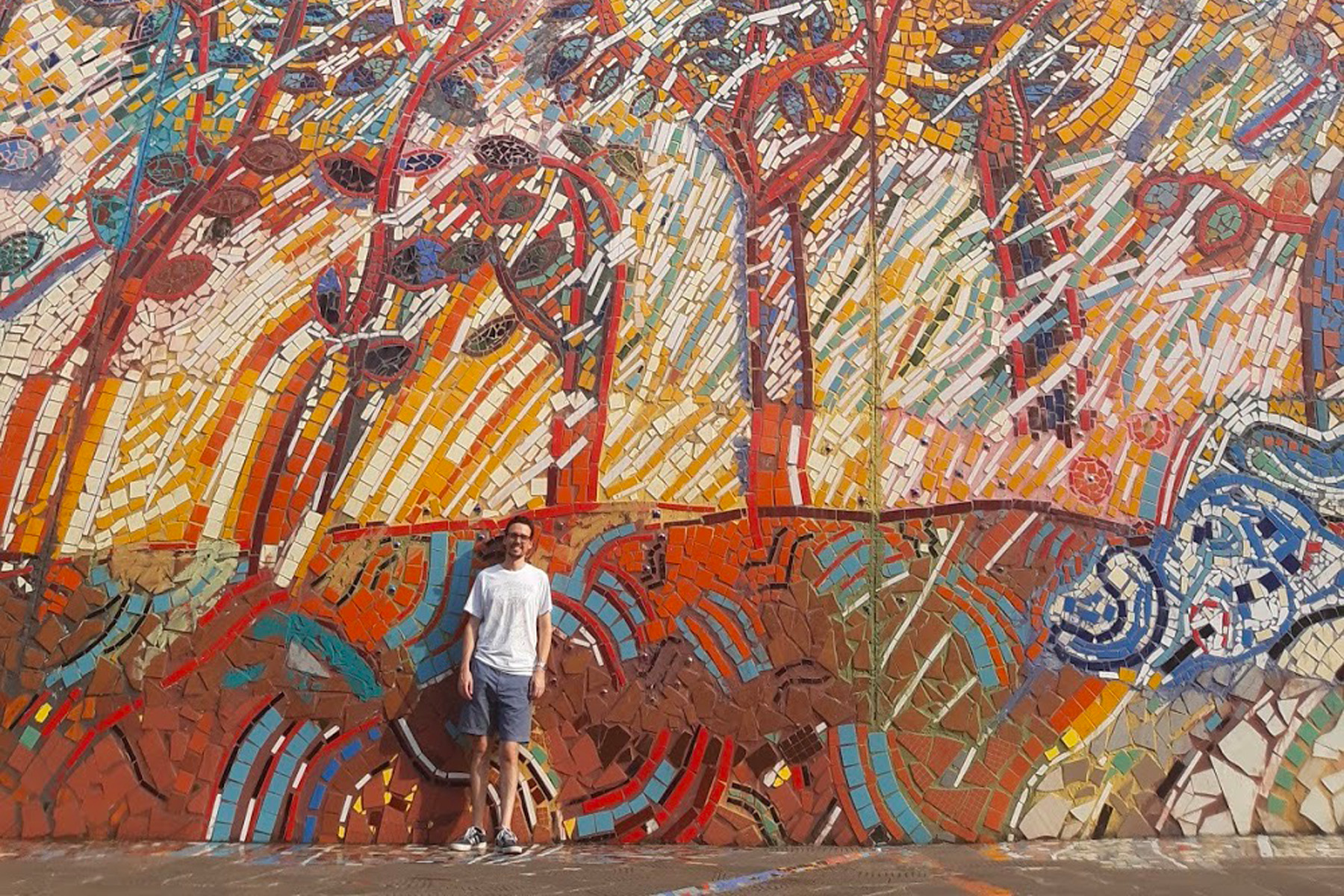 Sean-Paul in front of the Sichuan Art College in University City. (Photo provided by Sean-Paul Reilly)

Sean-Paul and Kinga have lived in Chongqing now for two years. When they decided to move to China and Chongqing, it was always with the aim of learning more about the culture and the local language. Chongqing does have a number of foreigners living here, but you are still “forced” to go out and be exposed to the culture and the language as well as the cultural differences. Unlike some larger cities in China, English is still not very commonly spoken in Chongqing. Despite being a major city with many Western influences, Chongqing remains very true to its own local Chinese culture, something you can see just about anywhere in Chongqing.

When they are not working, Sean-Paul and Kinga enjoy walking through Chongqing’s excellent parks, Jinshan Park and the Expo Gardens, in particular, which both have lovely walking routes. Being a mountain city, Chongqing also offers an abundance of hiking routes across the city, something that has been especially great in these times when travel isn’t so easy.

There is also a great selection of both Chinese and Western Restaurants in Chongqing.

‘Sometimes the best thing is just to ask around, especially locals, as they will tend to have the inside track on new places. We recently went to Delta in Chongqing Tiandi, which has fantastic drinks and food.’

And while some foreigners, visitors, and long-term residCultureents alike, can sometimes have trouble adjusting to the local spicy food here, that wasn’t really a problem for Sean-Paul.

‘I love eating spicy food, and I’m a big fan of Shao Kao, though I don’t think my stomach is used to it yet!’

Chongqing is also home to a unique music scene. Sean-Paul and Kinga used to go to gigs and theater shows in London and found a suitable location for a cultural fix here in Chongqing.

‘One of our top places that we regularly visit whenever we want to relax with some good jazz is InFree Live, a super jazz bar with consistently good live music and decent drinks, including our favorite whisky.’

Chongqing is Continually Changing and Evolving

When asked about his time in Chongqing and reflecting on the city and the changes he has seen, Sean-Paul noted that the city is not only a bustling place to be, but it is also resilient and authentic. And he would absolutely recommend for friends and family to come and visit the city if they have a chance to.

“This resilient city is always bustling with new places popping up. It’s sometimes difficult to keep track of it but thanks to our friends here we regularly manage to discover a new restaurant, coffee shop or an event. However, Chongqing remains true to its roots, and it’s refreshing to see locals being proud to be part of it.”

“I think if you are someone open-minded, adventurous, and culturally curious, Chongqing would be a great place to visit. CQ is authentic and has no pretense of being something it isn’t, and I say that as a huge compliment. The people here are friendly and helpful. I remember once early in our time here; we were looking for a delivered package that had been sent to the wrong place. A woman who happened to be walking past stopped and spent an hour driving us around to find it. You would not find that in many other places in the world.”