Chongqing – The opening ceremony of the first Yangtze River Three Gorges Plowing Spring Festival was held at the COFCO Organic Rice Production Base in northeast Chongqing’s Liangping District on Tuesday. Some 260 local farmers transplanting rice seedlings with the help of modern technologies on-site to kick start the plowing and sowing season on the Grain Rain day, the 6th of the 24 solar terms that marks the right time to sow wheat and rice.

An art beats drums in the opening show of the seedling transplanting ceremony. (iChongqing/Truman PENG)

About 200 people attended the opening ceremony & seedling transplanting ceremony, including officials from the Working Committee on Agriculture and Rural Areas of the CPC Municipal Committee, the Municipal Economic and Information Technology Commission, the Liangping District People’s Government, the district’s new farmers representatives, role models in poverty alleviation and rural revitalization.

Themed “Ten Thousand Dans of Plowing Spring, Pursuing Dreams in Countryside,” the event started with a warm-up song and dance show in which visitors and guests were greeted with performers in adorable mascot costumes, dancing to classic agricultural songs on both sides of the entrance avenue leading up to the venue. 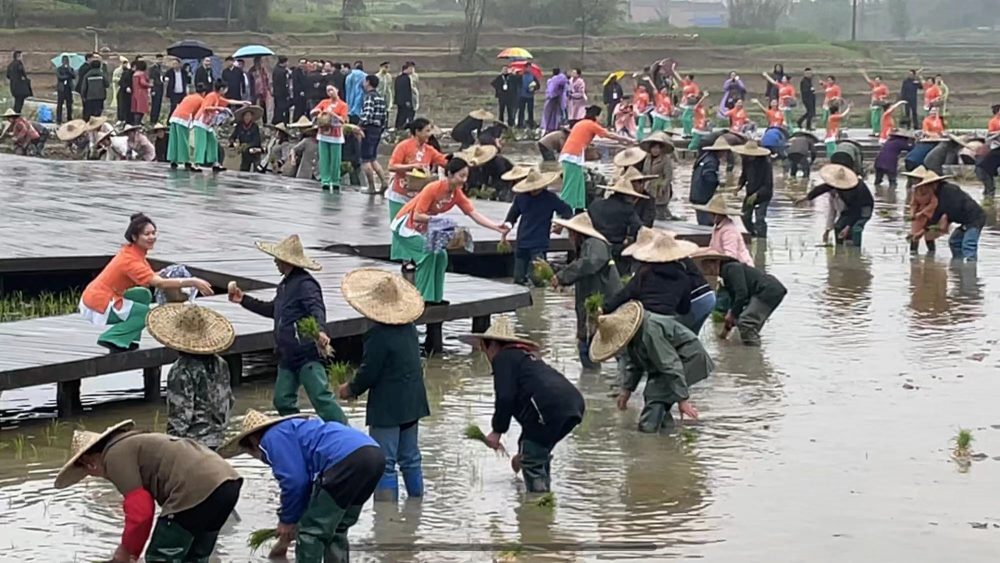 As soon as the District Party Committee Secretary Yang Xiaoyun announced the start of the seedling transplanting ceremony, which also marks the beginning of the first Liangping Plowing Spring Festival, some 260 local farmers jumped right into the fields and started sowing the seedlings of organic rice.

With the automatic seedling-transplanting machines and unmanned aerial vehicles (UAVs) for agricultural uses buzzing in the fields and over the head, the hundreds of local farmers helped to depict a vivid picture of the life of new farmers. 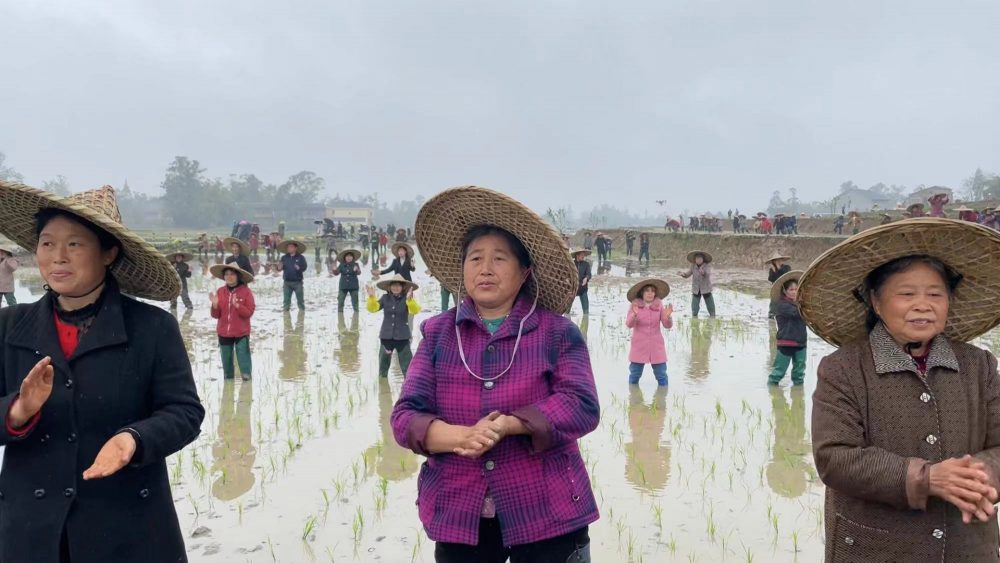 Farmers clap hands to the music while standing in the fields after they finished transplanting seedlings. (iChongqing/Truman PENG)

Right in front of the naked eyes of spectators, the fields for growing organic rice were filled with hardworking farmers with a handful of rice seedlings ready to be transplanted in a matter of few minutes, which demonstrated the high productivity and new farmers with the help of modern technologies.

As the grand show came to an end, officials from the municipal and district governments inspect the 10,000 mus of high-quality agricultural products growing base in the nearby Xingqiao Town.

Liangping has long been hailed as the Barn of Bayu, a historical reference to the now well-known Chengdu-Chongqing Economic Circle. (iChongqing/Truman PENG)

The seedling transplanting ceremony is part of the larger ongoing Liangping Plowing Spring Festival scheduled to be held from March to May this year, which also includes a Liangping fashion fair, a pomelo flower festival, a garden carnival, a bamboo shoot picking festival, as well as a parent-child rural experience event.