Chongqing – In 2018, when Su Weixi was officially endorsed as a district representative inheritor of Dazu Paper Cut, a municipal-level intangible cultural heritage, he had barely reached the age of 25, when most of his fellow contemporaries were still either crawling in the job market or preparing for graduation dissertations. 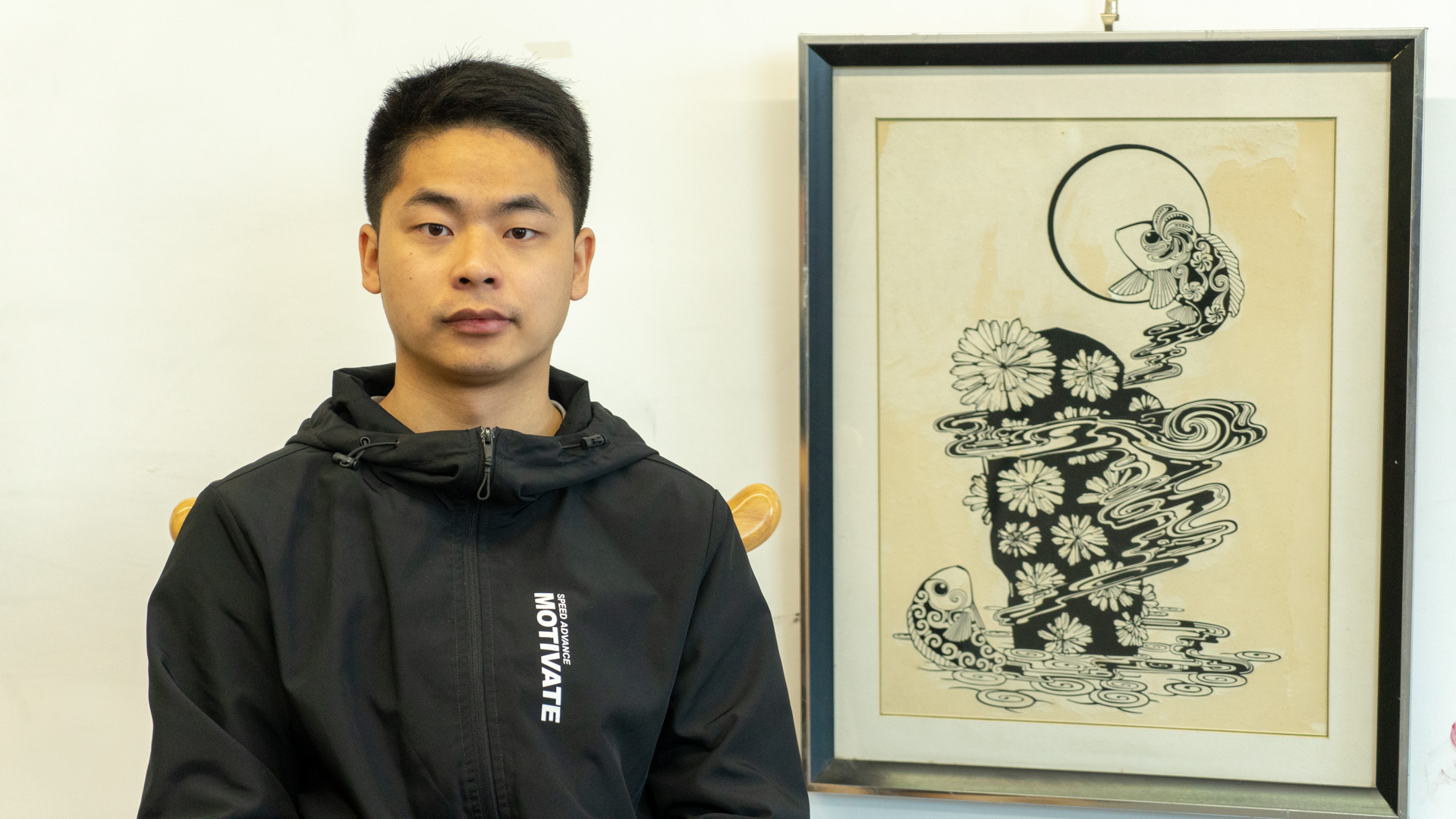 Su Weixi, a fourth-generation inheritor of Dazu Paper Cut, stands next to his first-ever paper cut creation during an exclusive interview with iChongqing.

“I’m deeply aware of the fact that the honorary title isn’t just an acknowledgment to my years of dedication to preserving and passing on Dazu Paper Cut, but also bears great responsibilities for not letting the traditional art die out with our generation,” Su said.

Young and talented as he may be, Su never likes to satisfy himself in a comfort zone and set boundaries for exploring all possibilities. 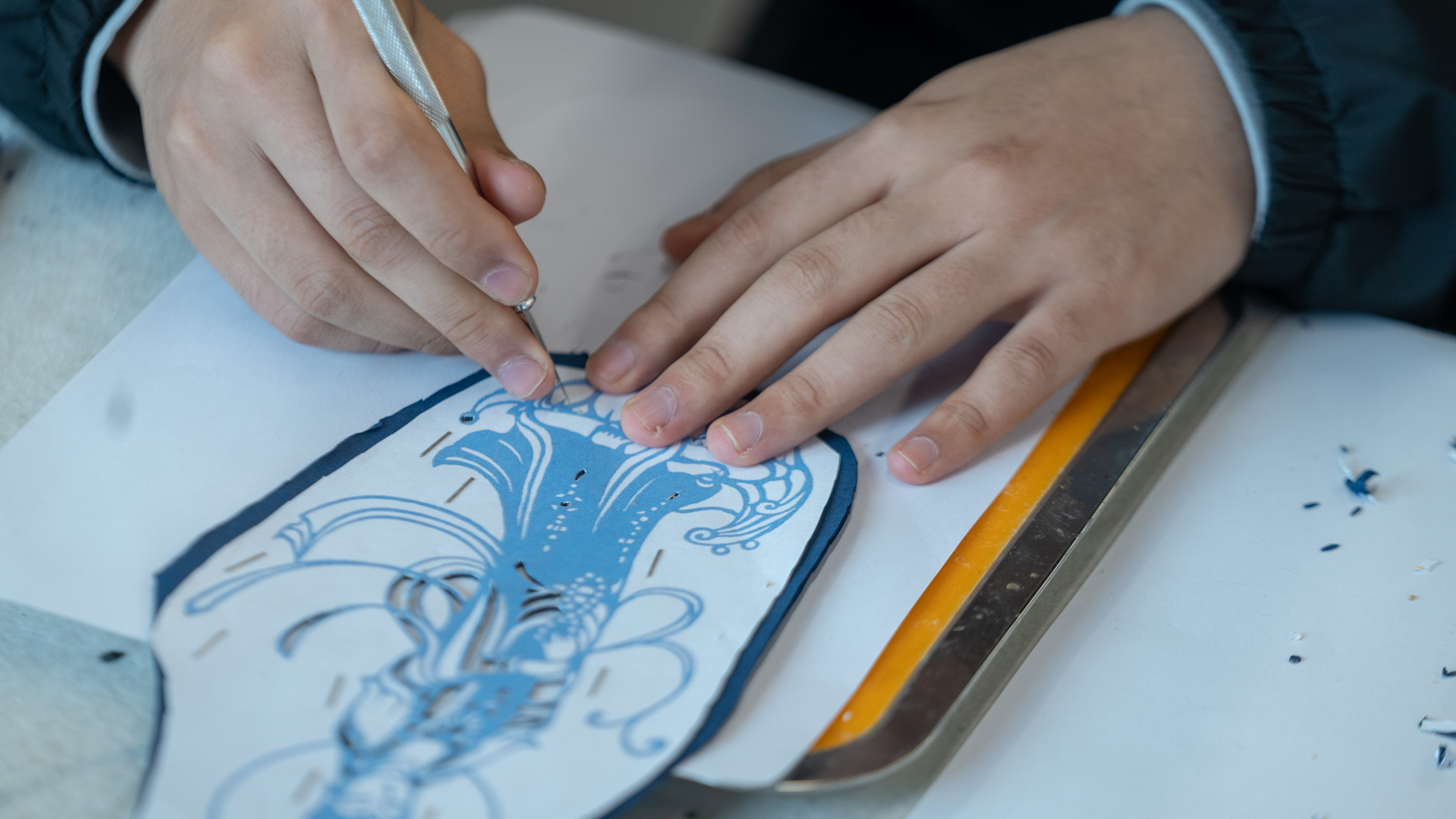 Su works on a paper cut project in his work studio inside the Cultural Center of Dazu.

In 2016, Su’s paper cut project won the “Golden Wings” award at the national final of the 2nd China Chuangyi Entrepreneurship and Innovation Competition; in 2017, Su’s paper cut work of “Great Changes of Chongqing” was acquired by then Chongqing Literature and Art Institute for permanent collection; in 2018, his “Weixi Dazu Paper Cut” project won the nominee award at the 2018 China Characteristic Tourist Commodity Competition; and in 2020, Su carefully crafted a profile photo of Yuan Longping on a paper cut canvas and presented it to the internationally esteemed Chinese agronomist at his 90th birthday banquet.

However, the fame and success of Su Weixi didn’t come overnight but through year’s dedication and devotion.

The destinies of Su Weixi and Dazu Paper first began to intersect in 2008 when the 15-year-old youngster decided to study traditional Chinese painting and oil painting under the renowned master of Pang Shulin himself is a second-generation inheritor of Dazu Paper Cut. 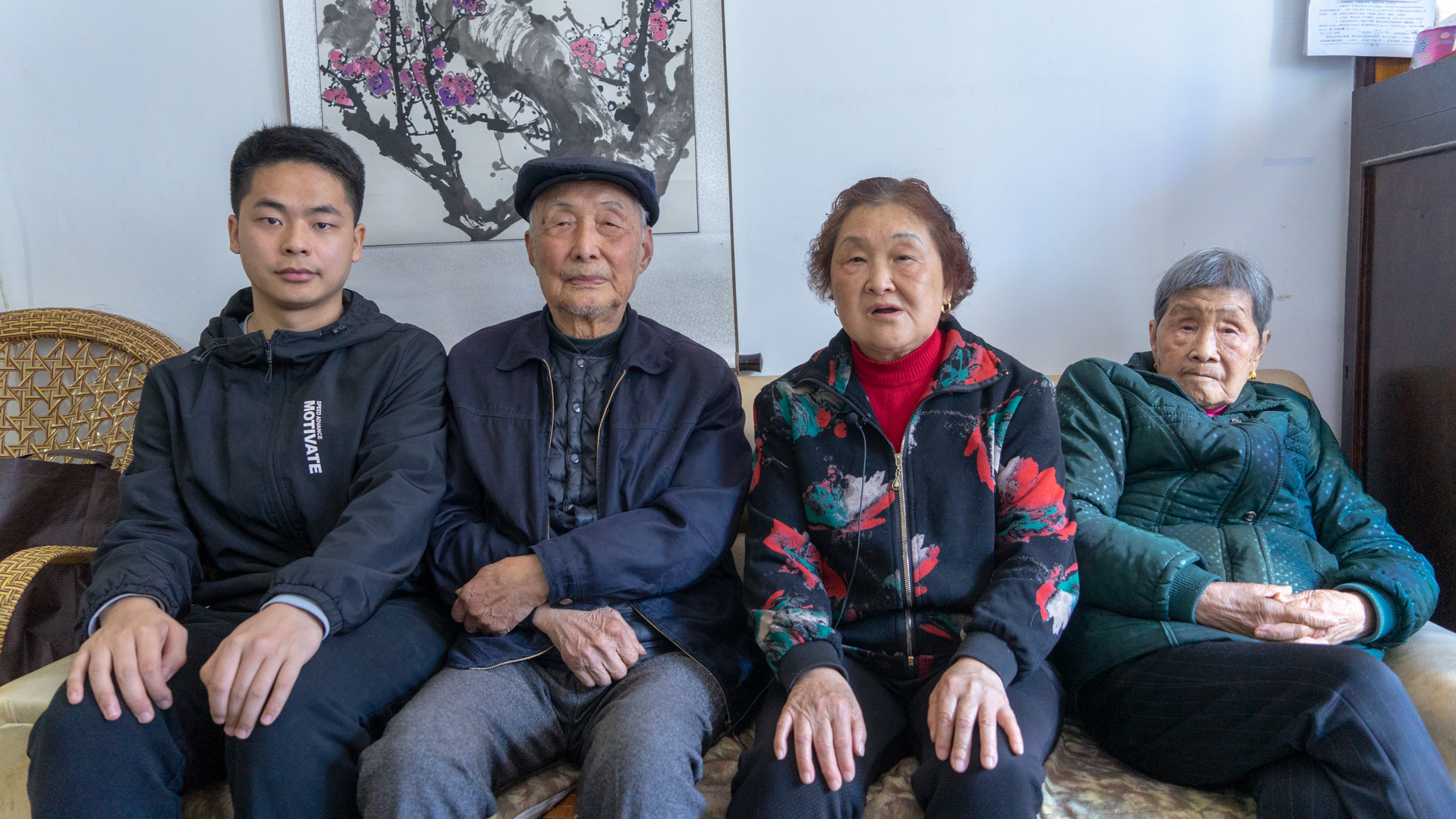 At that time, Su spent almost every second he could spare on learning and honing painting techniques, so much so that forgetting to eat and sleep had become an everyday routine. He had a two-meter-long desk stacked with piles of empty canvases placed right next to a bed in his room, which his parents often found scattered with scraps of his paintings.

After years of practice, Su gradually gained acknowledgment from his teacher Pang Shulin and was formally accepted as the master’s last “close door” disciple in 2010. And that’s about the time when Su was first exposed to the art of paper cutting and started to show his talent in the field.

In 2013, by a nearly mystical twist of fate, a graduate student of Sichuan Fine Arts Institute visited the Cultural Center of Dazu and was amazed by the exquisite paper-cut works of Pang Shulin. The graduate student soon reported this “surprise” to the university, which later collaborated with the Dazu authority and organized a Dazu Paper Cut Art Works Exhibition. 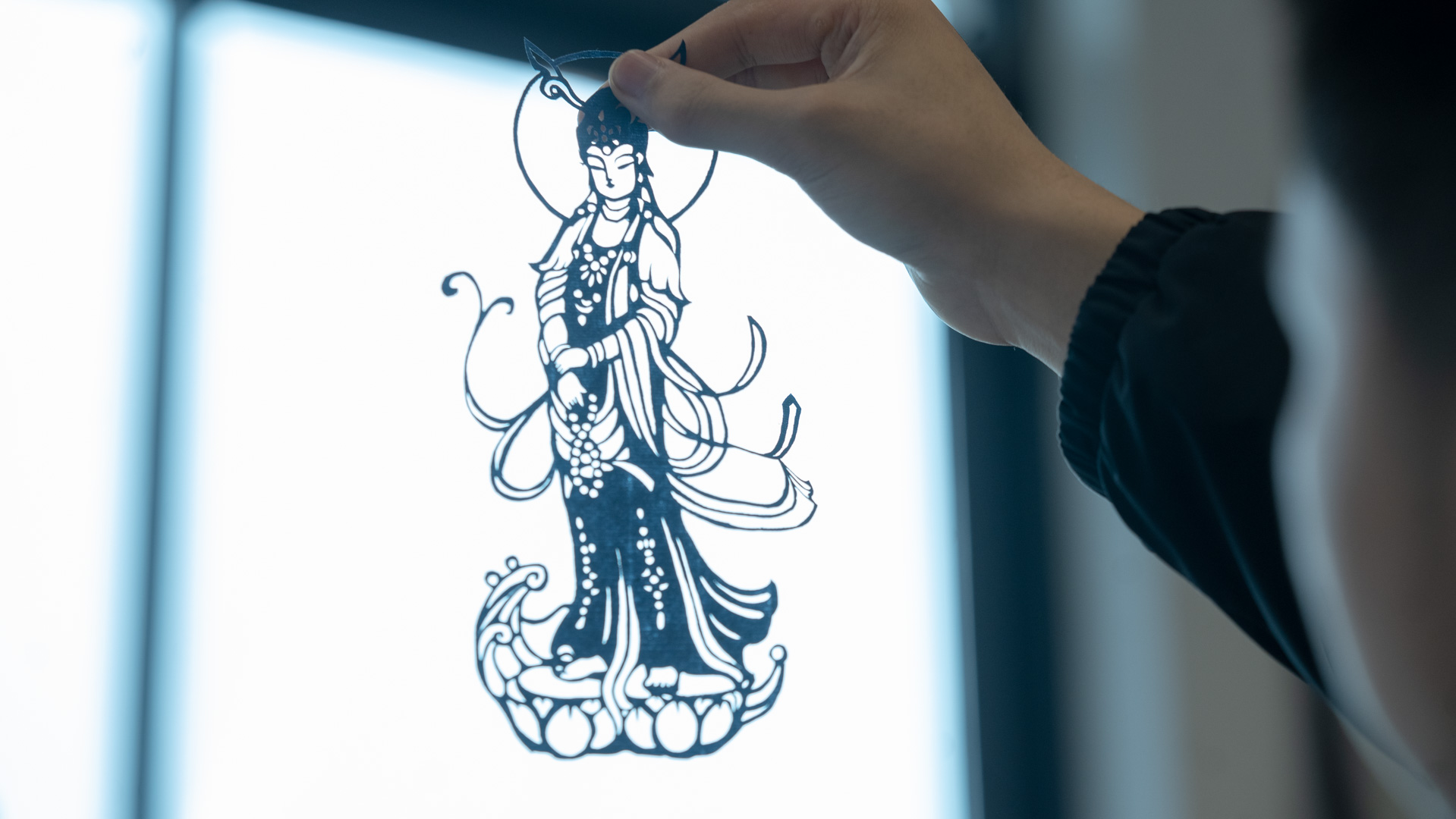 To prepare for this “once-in-a-lifetime” promotional exhibition, Pang asked Su to help arrange some of his works for the exhibition and create as much more innovative paper cut works as possible. Trying very hard not to fail his teacher’s expectations, Su created a lot of his original works to be exhibited alongside his teacher’s works at the exhibition, among which the “Blue Flower Peacock,” “Autumn Moon,” and “A Woman’s Profile” gained wide recognition.

The exhibition, according to Su, turned out to be a great success and was a game-changer for not just himself but also the traditional art of paper cutting in Dazu, which dates back to more than a thousand years.

“The exhibition attracted much-needed public attention to the dying art of Dazu Paper Cut, which partly contributed to its later being endorsed as a municipal-level intangible cultural heritage of Chongqing,” said Su.

In February of 2016, Su partnered with some like-minded friends and founded a startup company to promote Dazu Paper Cut better and popularize the art among the public. He used his first name and registered the Chongqing Dazu Weixi Paper Cut Art Co., Ltd. 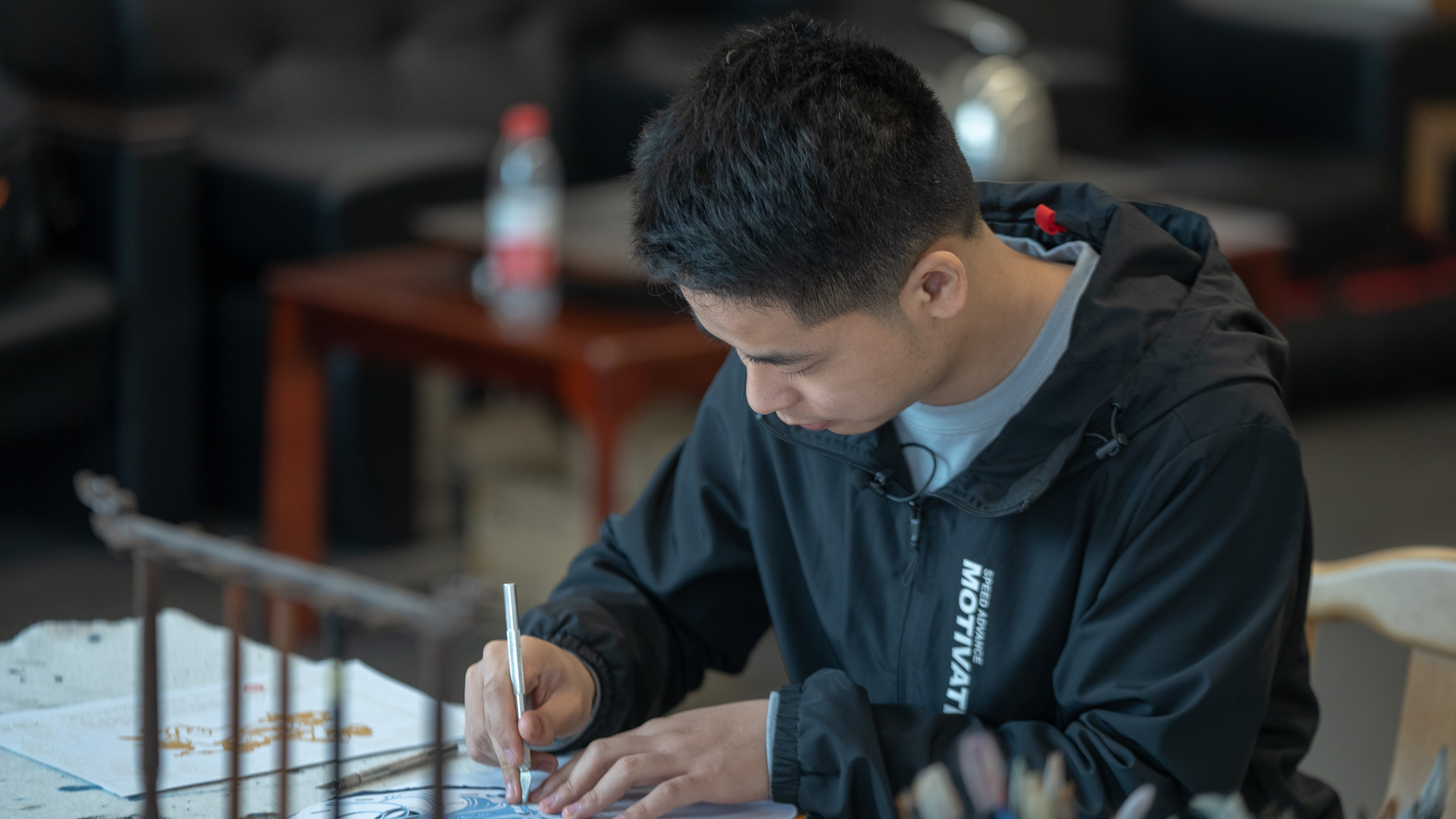 Su works on a paper cut project in his work studio inside the Cultural Center of Dazu.

“When we first started, we’re with the hope of commercializing Dazu Paper Cut and devoting ourselves to it full-time, which would be ideal for its promotion and gradually developing into an industry,” Su said. “However, we soon realized that it’s hard enough to make a living out of it, let alone to profit from it.”

Su said that It’s more out of passion and enthusiasm than profitability for him as an inheritor to try to popularize the traditional intangible cultural heritage in every possible way. However, he is already looking for an alternative supporting career that can bring a steady flow of money to finance his Dazu Paper Cut project for as long as possible.

Difficult as it might be for an inheritor trying to popularize and pass on a non-mainstream art, Su said he still managed to give out free educational lessons on Dazu Paper Cut every year, which could eventually somehow serve to “kindle a small fire on a large grassland.” What’s more, the company he co-founded, which hasn’t given in to the cruel reality yet, even though there’s no reliable source of revenue, is still exploring new business models to invigorate the potential Dazu Paper Cut industry.

We don’t know exactly how things would pan out for Su Weixi and Dazu Paper Cut in the nearest future, but we know that the youngblood’s passions like him could eventually inject great confidence in and bring a strong momentum to the traditional culture and art industries.