Story about Southwest University and Father of Hybrid Rice

On May 22, 2021, Yuan Longping, awarded the Medal of the Republic, died from multiple organ failure at age 91. He also served as an academician with the Chinese Academy of Engineering and Director of China National Hybrid Rice R&D Center. 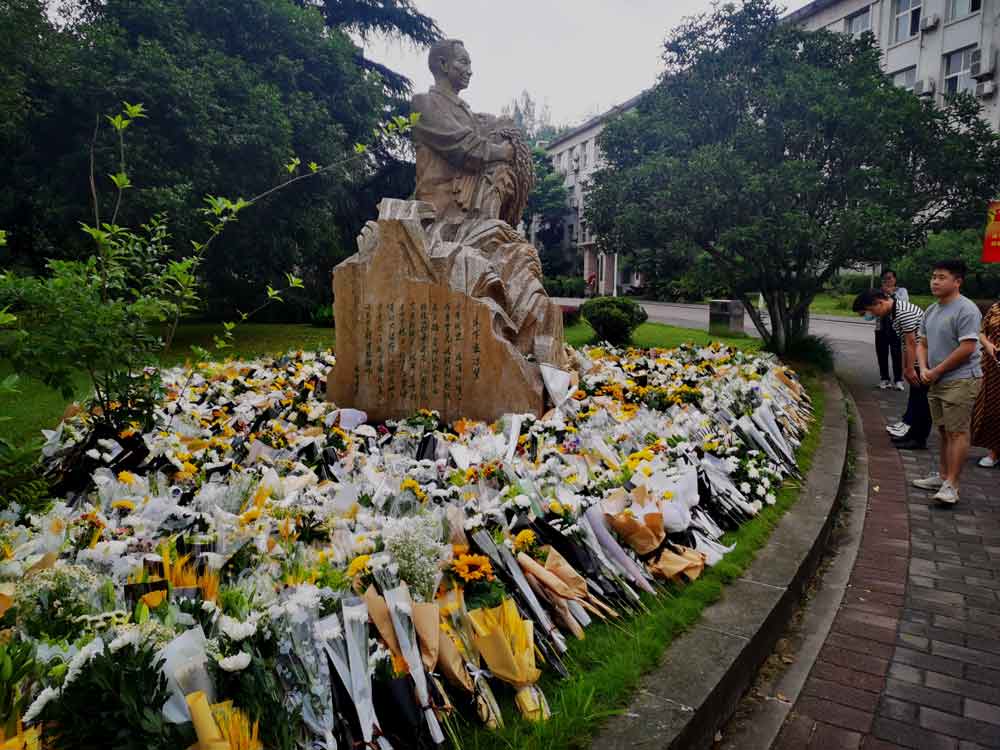 On the afternoon of that day, many teachers and students mourned in front of the statue of Yuan Longping at the Southwest University. Photo/ Shangyou News

On the afternoon of that day, many teachers and students mourned in front of the statue of Yuan Longping at the College of Agronomy and Biotechnology, south campus of Southwest University.

Holding hybrid rice plants in his hands, Yuan looks far ahead — the statue of Yuan Longping is made of granite and about four meters high. On the green lawn, chrysanthemums lied quietly. Then, the statue saw more and more people who stood in silence with their heads bowed and eyes filled with tears.

While studying at university, Yuan’s performance in agronomy was average, but that in English was very good, with the highest score reaching 93 points. He was also good at sports, especially swimming.

At a celebration for the 110th anniversary of the founding of Southwest University in 2016, Yuan returned to his alma mater and made a report on New Progress in Super Hybrid Rice Research.

He was asked a question by a student on the site, “If you were to make a choice again, would you choose rice cultivation or professional swimming?” Yuan answered with a smile, “At the regional games in southwest China in 1952, I won fourth place, and the top three were admitted to the national team. If I had ranked in the top three then, I wouldn’t have become the father of hybrid rice.”

“That reflects the all-around development of Yuan,” said the head of the journal. Yuan believed that knowledge starts with practice, and students majoring in agronomy must practice in the fields. Besides, English and computer knowledge are also necessary.

Hybrid rice has been widely planted in India, Bangladesh, Indonesia, Vietnam, the Philippines, the United States, Brazil, Madagascar, and other countries. With an annual planting area of eight million hectares, the average output of hybrid rice per hectare is about two tons higher than the local excellent varieties. That owes much to Yuan Longping, the “father of hybrid rice.”

In July 1960, Yuan accidentally discovered a special rice plant in an

“Facing the severe famine at that time, he was determined to eliminate hunger with agricultural science and technology, so he broke through the shackles of classical genetics and began to study hybrid rice,” introduced an expert from the College of Agronomy and Biotechnology, Southwest University. Yuan Longping removed the male flower of a monoecious rice plant and pollinated it with another variety for a hybrid.

In the spring of 1961, he planted the seeds of the variant in an experimental field, proving that the special plant he discovered is “natural hybrid rice.”

In 1964, Yuan saw hundreds of seeds of the first-generation male-sterile plants due to artificial pollination. The results of hybrid rice have been widely popularized and applied in China since 1976, greatly improving the yield per unit area and the total yield.

In 1995, Yuan Longping was elected as an academician with the Chinese Academy of Engineering. In 2019, he was awarded the Medal of the Republic, China’s highest state honor.