The foreign ministers of China and the Association of Southeast Asian Nations (ASEAN) gathered on Monday for a Special ASEAN-China Foreign Ministers’ Meeting in Celebration of the 30th Anniversary of Dialogue Relations. 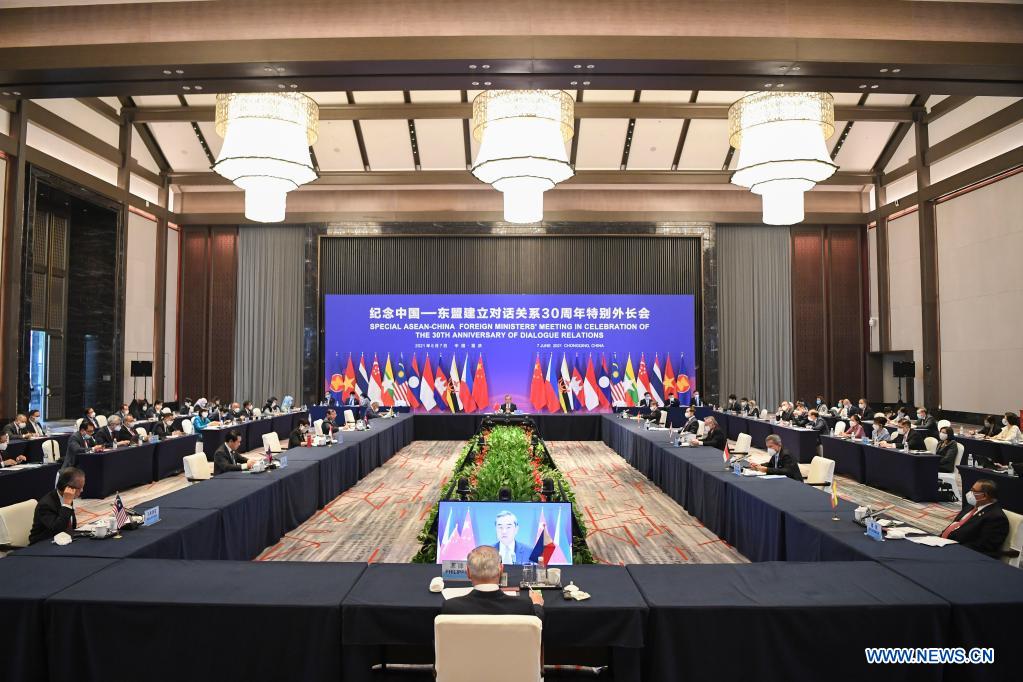 The Special ASEAN-China Foreign Ministers’ Meeting in Celebration of the 30th Anniversary of Dialogue Relations is held in Chongqing, southwest China, June 7, 2021. The foreign ministers of China and the Association of Southeast Asian Nations (ASEAN) gathered on Monday for the meeting, which was co-chaired by Chinese State Councilor and Foreign Minister Wang Yi and Teodoro Locsin, foreign secretary of the Philippines that serves as the current country coordinator for ASEAN-China relations. Also in attendance was the ASEAN Secretary-General. (Xinhua/Wang Quanchao)

The meeting in southwest China’s Chongqing Municipality was co-chaired by Chinese State Councilor and Foreign Minister Wang Yi and Teodoro Locsin, Foreign Secretary of the Philippines that serves as the current country coordinator for ASEAN-China relations. Also in attendance was the ASEAN Secretary-General.

Wang said that over the past 30 years, China-ASEAN relations have developed by leaps and bounds, releasing vigorous vitality and covering a broad area.

The two sides have pursued harmony and win-win cooperation and have built an important pillar for regional peace and stability, forged a powerful engine for development and prosperity, and established the most successful example of Asia-Pacific regional cooperation, Wang said.

The two sides have established dialogue mechanisms at various levels between leaders, ministers and senior officials to conduct timely strategic communication on major issues, thus laying a solid foundation for the development of relations, Wang said.

Trade volume between China and ASEAN jumped from less than 8 billion U.S. dollars to 684.6 billion U.S. dollars, an increase of more than 80 times. The personnel exchanges have exceeded 65 million in 2019, and there are nearly 4,500 flights between China and Southeast Asia every week. Meanwhile, the two sides have exchanged more than 200,000 students and formed more than 200 pairs of sister cities, according to Wang.

Wang stressed that over the past 30 years, the two sides have become the largest trading partner, the most connotative cooperation partner and the most dynamic strategic partner through joint efforts.

Noting that China and ASEAN should focus on the next 30 years, Wang puts forward suggestions for the two sides to jointly realize, maintain, and develop a road of regional cooperation with East Asian characteristics, build a higher level of China-ASEAN strategic partnership, and build a closer community with a shared future.

Both sides should deepen anti-epidemic cooperation, Wang said, adding that China will continue to play its role as a responsible major country to do its best to provide vaccines to ASEAN countries, and strengthen cooperation in vaccine research and development, production, procurement, vaccination, and supervision with other countries.

Noting that both sides need to push forward economic recovery, Wang said China and ASEAN should create a new high landscape and new situation for China-ASEAN cooperation after the pandemic.

The two sides should carry out cooperation on the blue economy and create cooperation highlights in fishery resource conservation, marine environmental protection, and maritime disaster prevention and mitigation, he added.

Wang also called for upgrading relations. He said that both sides should explore to elevate China-ASEAN relations to the comprehensive strategic partners and set a new benchmark for China-ASEAN cooperation.

Wang also called on both sides to uphold multilateralism and work together to promote Asian values.

Foreign ministers of ASEAN countries extended congratulations on the 100th anniversary of the founding of the Communist Party of China, fully affirmed fruitful results achieved since ASEAN and China have established dialogue relations over the past 30 years.