9 intangible cultural heritage projects from Chongqing: up to a national level

Youyang Tujia Mask Yang Opera, also known as Face Shell Opera, is a folk drama widely circulated in Youyang Tujia and Miao Autonomous County, Chongqing. According to the research, it was formed during the Jiaqing and Daoguang years of the Qing Dynasty. The content of the Yang Opera mainly reflects common humanities and ethics, family life, labor stories, love stories, and stories about myths and legends.

Stomp Technique refers to a kind of acrobatic item of carrying things on foot. In the Han Dynasty, there was a prototype of this technique, and it gradually became a typical and representative technique of acrobatics in the Song Dynasty and has been fully formed into an independent form of acrobatic performance in the Ming Dynasty. The performance form of stomping is that the performer lies on a special seat and uses both feet to take over various props to perform various tricks.

Flower Embroidery is a traditional art handed down in Wuxi County, Chongqing. In the past, girls in Wuxi county started to embroider flowers – their future dowry at the age of 11 or 12. It incorporates the local art traditions and each individual’s wishes and hopes for the future into the embroidery. Wuxi flower embroidery has its unique techniques and can withstand brushing, rubbing, and repeated washing without loose stitches, which has the characteristics of beauty, simplicity, and durability.

Dazu stone carving is the general name of the stone carving art that has been handed down from the early Tang Dynasty to the present day in Dazu District, Chongqing. Dazu stone carving mainly uses sandstone and bluestone produced locally in Dazu, as well as the purple jade and white marble produced in Guizhou and Sichuan as the material, and uses the local small hardware as the tool.

Zhao’s Leihuo acupuncture is a long-established Chinese medical specialty of the Zhao family in Chongqing, with its origins traced back to the “thunder fire moxibustion” recorded in the Compendium of Materia Medica. During the Qing Dynasty, Zhao Zhongde, a folk doctor in Bishan, Chongqing, created Zhao’s Leihuo Moxibustion Therapy. It has been passed down for six generations and has a history of more than 150 years.

Xiushan Miao Sheep and Horse Festival, also known as the “Miao May Year”, is a traditional festival held regularly every year by the local Miao people with thanksgiving for fruits and vegetables as well as sheep and horses as the main content. The festival has a strong meaning of thanksgiving and ancestor worship, which is a true reflection of the emotions of the local Miao people and has important academic value for the study of Chinese Miao culture. 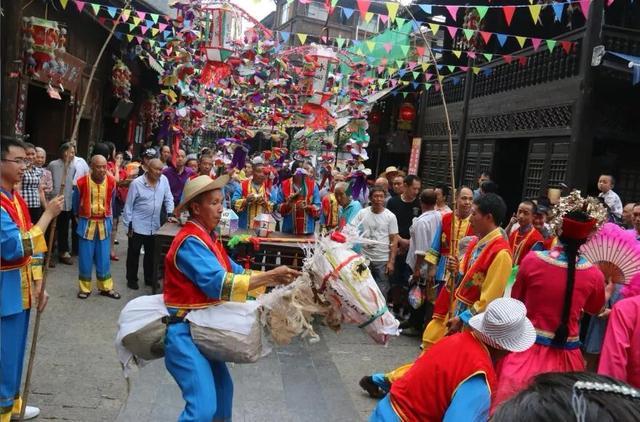