Authentic Xituo gourmet food like Mimi tea, Youqianba (a crescent fried wheaten food with stuffing), and Youjiaojiao are rich in variety, attractive in color, delicious in taste and not expensive.

the prepared raw material of a Xituo`s snack

Xituo Ancient Town has its unique diet due to the multicultural influence. As for the menu, Xituo Ancient Town gave priority to salty dishes. Focusing on nine big bowls, Xituo Town has a leading dish, also known as the “dry plate,” which would be served first before the rest.

As a famous snack in Xituo, Youjiaojiao, the fried seasoned flour, is held in the dry plate and can be made into a variety of shapes such as animals and flowers, rendering it good looking and good in taste. Li Fengying, 60 years old, is a famous cook good at a whiteboard – cooking that deals with staple food. Li was making Youjiaojiao, repeatedly kneading the ripe dough with dry flour, rolling it into dough wrapping and cutting with a knife. Then she pinches it manually into various shapes, putting it into hot cooking oil for frying, then bailing it out, dripping with oil. There are many ways to eat Youjiaojiao. In addition to eating directly, it could also go with noodles or fish soup. As for the texture, Youjiaojiao was crisp when you eat it straight and soft and waxy when it’s boiled. 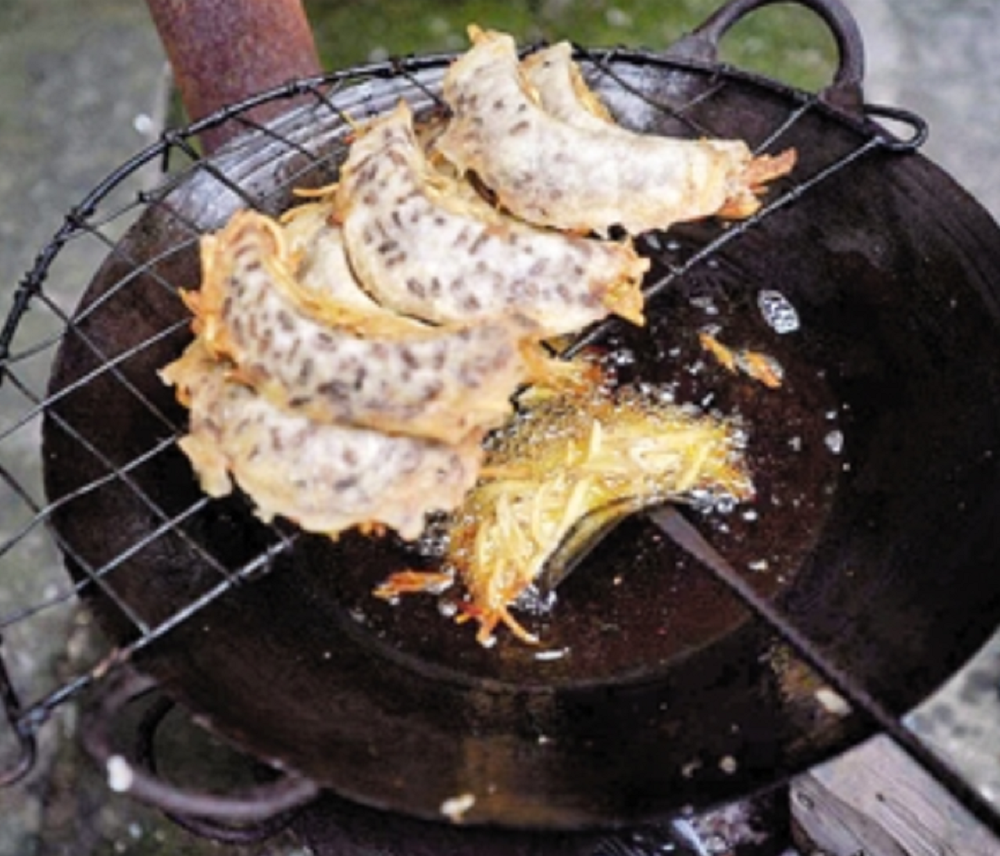 At the entrance of Yunti Street in the Xituo Ancient Town, the indigenous Huang Xueying greeted the reporter to sit down for drinking a bowl of authentic Mimi tea. Mimi tea is also known as “tea for welcoming guests” in the local area. As the name implies, guests would drink a bowl of tea for quenching their thirst as soon as they come to the house.

The earliest Mimi tea was brewed from a few spoonfuls of cereal, a little bit of fermented glutinous rice wine and brown sugar or white sugar mixed with boiled water. At present, black sesame seeds, beans, peanut crumbs can be added into Mimi tea according to the preferences of the guests, at the cost of 2 or 3 RMB per bowl.

Drink Mimi tea, and order the Fried rice tofu and round Youqianba. The Fried rice tofu is made by frying the cooked rice cake pieces in the hot oil, which is crispy outside and tender inside at the cost of 1 RMB per piece.

The fragrance comes with the wind along the old street paved with bluestone plates. Qin Xingchun, a native of Xituo was frying round Youqianba. He poured a layer of rice flour on the crescent-shaped container, added red beans, mixed potato shreds or turnip radish as filling, poured a layer of rice flour on the surface, fried them to be brown in the hot oil. The fried round Youqianba, round just like a silver piece. Therefore it is called round Youqianba, at the cost of only 2 RMB per piece.

Stack up a large iron pan and pour half a pot of pure rapeseed oil into it. After the oil is hot, add dried chili, sesame, and other materials. Then pour secretly-made dried mushrooms, a pot of Tujia Manually stir-fried mushroom is cooked.

Cut the beef into large pieces, smear some salt and seasonings on it, put them in the pot for five or six days, and then take them out, smoke them with clean flavored firewood of cypress or mandarin orange leaves, then “Zhang Fei beef” is cooked.