Past and Present of the Chongyang Festival

The Chongyang Festival or Double Ninth Festival, observed on the ninth day of the ninth month in the lunar calendar, is a traditional Chinese holiday. In Chinese, “九” (nine) shares the same pronunciation with “久” (long) so that it is customary for ancient Chinese people to worship ancestors, show respect to the old, drink chrysanthemum liquor, and enjoy Chongyang Cakes at this day. What is the origin of the Festival?

And why is it called the Double Ninth Festival?

The Chongyang Festival has other names of Height Ascending Festival and Double Ninth Festival. According to the traditional Confucianism spiritual concept since the middle of the Han Dynasties, six is a yin number while nine is a yang number. Hence, the day is also called the Double Yang Festival.

In the last stage of the Warring States, Master Lü’s Spring and Autumn Annals · Jiqiu Section had already mentioned ancestor worship when harvesting in the ninth month of the lunar calendar to express appreciation to ancestors and deities.

In the Han Dynasties, the connotation carried by the Chongyang Festival had changed. Xijing Zaji (or A Miscellaneous Record of the Western Capital) records that since then, praying for longevity had become another tradition of that day.

During the Wei, Jin and Southern and Northern Dynasties, Jingchu Suishiji, a description of holidays in central China during the 6th and 7th centuries, writes, “On the ninth day of the ninth month, people would collect firewood to hold feasts.” The “feasts” are from banquets in celebration of good harvest since the pre-Qin period. Since then, praying for longevity and holding feasts had already formed major parts of this festival.

In the Tang Dynasty, it specifies as a formal festival. Afterwards, Chongyang Festival, with enriching traditions, has been observed since today. 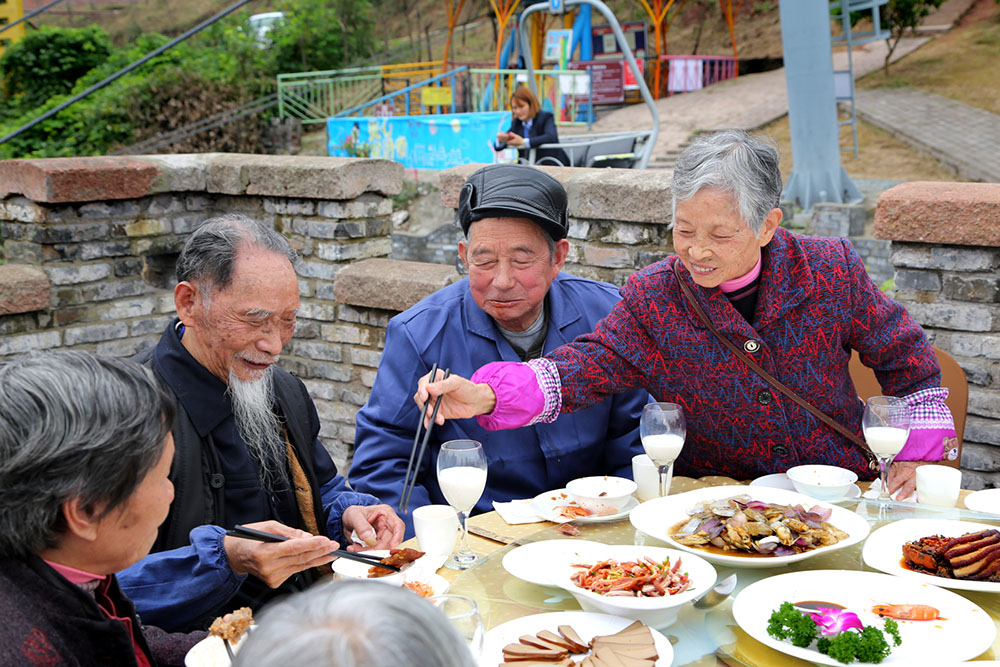 Chongyang Festival is a day to show respect to the old.

Another possible origin of the Chongyang Festival

Interestingly, there is another origin of the Chongyang Festival. In Some Thoughts Concerning Traditions of Chongyang Festival, Xiao Fang, a folk custom professor from Beijing Normal University, said that some of its traditions are originated from worshipping Dahuo Constellation (literally Big Fire Constellation) in ancient China.

As a seasonal indicator in ancient China, Dahuo Constellation would gradually disappear in autumn, causing fear among people who had deified it. Its disappearance also indicated the coming of chilly and long-lasting winter.

In those days with backward production, winter means coldness and lack of food. Thus people held sacrificial ceremonies when Dahuo Constellation disappeared and fire welcoming ceremonies to celebrate its coming.

Boundary between autumn and winter

As time went by and due to the calendar changes, fire worship ceremonies in the ninth lunar month had declined, but people still climb mountains during this period. Besides, the Chongyang Festival is also one of the boundaries between autumn and winter, influencing people’s feelings and thus giving birth to related traditions.

Climbing high mountains, a key activity of this day, stemmed from the Han Dynasties. In the Jin Dynasty, people formed the tradition to enjoy chrysanthemum and drink liquor for celebration. Similarly, people wear the zhuyu plant (Cornus officinalis) for protection against danger. Zhuyu features rich aroma and functions of parasite expelling, damp cleaning, ailment curing, digestion promoting, and chills and fever dispelling. People usually wear zhuyu for driving out evil spirits and being blessed, so that the Chongyang Festival is also called Zhuyu Festival.

Climbing high mountains is a key activity in Chongyang Festival.

At the mention of delicacies of this day, people will always remember Chongyang Cake. “糕” (cake) has the same pronunciation with “高” (high) in Chinese so that people in the early years enjoyed Chongyang Cakes, representing newly-harvested grain, for celebrating a bumper year. Moreover, the future generations eat Chongyang Cakes for its auspicious meaning of promoting to a higher position.

In addition, married women usually visited their parental homes at this festival, and it is another tradition for parents to receive their daughters to enjoy Chongyang Cakes. So that Chongyang Festival is also regarded as the Daughter’s Festival like the Dragon Boat Festival.

The meaning of Chongyang Festival in modern society

In modern society, everyone is busy all the year round, and Chongyang Festival brings an ideal opportunity for them to get close to nature. In the invigorating season, people are well-advised to go autumn outing. Far from bustling cities, they can experience the feelings of ancient people when climbing high and gazing far.

Traditionally, Chinese people pray for longevity in Chongyang Festival. Thus the day, with special cultural connotation, is a reminder for people to cherish today’s wonderful life and to position themselves in modern society.

Besides, the public should also organize activities to show care and respect for the old. In these activities, they are advised to invite the old to tell stories about China’s traditional culture, which may edify the young.