Chongqing- When a company engaged in the automobile trade once took a transferred railway bill of lading to a logistics company to collect an imported vehicle, what caused them to meet with a refusal?

IMSA GmbH has long entrusted Chongqing Sinotrans Logistics Co. Ltd. to transport vehicles from Germany to Chongqing on the China-Europe Railway Express and agreed for Sinotrans to issue a railway bill of lading, which is the only form of documentation available for collection on delivery.

As the transfer proceeded, a set of railway bills of lading from IMSA GmbH was delivered to Fuqi. However, when the latter went to take delivery from Sinotrans, they refused to release the vehicles.

Fuqi took Sinotrans to court in order to confirm ownership of the vehicles listed in the railway bill of lading and demand that Sinotrans complete their delivery.

During the proceedings, the dispute’s main point centered on whether the bill of lading entitled the holder to take delivery of the goods.

While Fuqi maintained that railway bills of lading are the only form of evidence to claim delivery rightfully, Sinotrans held the position that according to the original three-party agreement, it could only deliver the goods to IMSA GmbH. Following the transfer of the railway bill of lading, the document should have been endorsed, so they refused to release the goods.

A verdict was passed on this first legal dispute nationwide over a railway bill of lading dispute last June, which was overseen at the Chongqing Liangjiang New Area People’s Court. Support was afforded to the railway bill holder’s claims, and ownership of the goods was confirmed.

The court upheld that transfer of the railway bill of lading between and IMSA GmbH and Fuqi entitled the holder to claim delivery, the process of which should be regarded as complete.

The Court has established a mechanism to facilitate inquiry and application of laws in countries along the New International Land-Sea Trade Corridor (ILSTC), to improve foreign-related legal services. 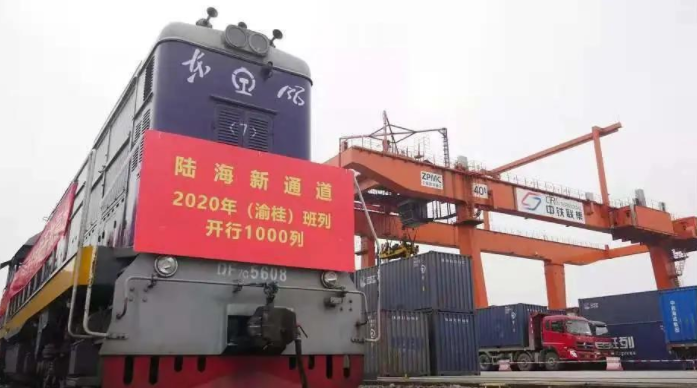 CFTZ People’s Court has established a mechanism to facilitate inquiry and application of laws in countries along ILSTC, to improve foreign-related legal services. (iChongqing file photo)

Since 2019, the Court has accepted hundreds of cases of Thailand, Laos, Myanmar, and other countries along ILSTC, which covers such fields as an overseas investment partnership, sale and transportation of goods, infrastructure (hydropower stations, etc.), construction, house renting, outbound tourism, and private lending. The great variety of industries involved and incomprehension of overseas laws usually hinder hearing of the cases.

Jia Ke, Vice President of the Court, said that next, it would intensify the mechanism’s application, improve the capability to use overseas laws correctly, and expand Chinese justice’s international influence while enhancing platform building and upgrading hardware for mechanism application.

He continued, the Court is also expected to stimulate the forming and perfecting of international regulations in the field of international multimodal transport of goods, give play to the guiding role of judicial rules, and encourage market entities to follow international rules in foreign trade.

Establishment and standardization of trade rules

The railway bill of lading case about the disputes over railway B/Ls was also included in the Top 10 Typical Cases of 2020, jointly selected by the China Trial and the Research Office of the Supreme People’s Court. It is believed that the rules of adjudication confirmed by the case can promote the standardization of railway B/L transactions, the establishment of overland trade regulations, and the orderly operation of China-Europe freight trains.

The Court introduced that it centered around institutional innovation and creating a law-based, international, convenient business environment over the past years to build a one-stop mechanism for foreign-related commercial dispute resolution.

As a result, more than 2,000 cases have been assigned or entrusted for mediation; foreign-related commercial cases, such as the one involving Jenoptik and International Far Eastern Leasing, have been solved.

Particularly, the case, a Russian international travel agency indicting the Chongqing branch of a tourism group, was the first in China that became an arbitration case from a litigation one. The Court also creatively built a mechanism for parties to search for foreign laws — the strong support for people to understand and apply laws in countries along the ILSTC.