Several loaded trucks slowly pulled out of the Chongqing Highway Logistics Base in Banan District and were headed for Vientiane, capital of Laos, recently, which is more than 1,900 km away. 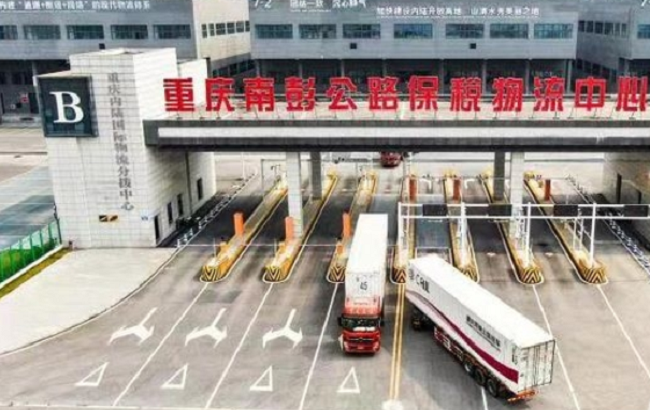 Several loaded trucks slowly pulled out of the Chongqing Highway Logistics Base in Banan District and were recently headed for Vientiane, Laos. (iChongqing file photo)

On April 28, the base applied the first  Greater Mekong Sub-region (GMS) vehicle permit obtained by Chongqing and even by China’s western inland, which means that trucks dispatched from the Base could reach Vientiane directly within four days.

The base has opened eight trunk routes connecting Vientiane and other places and established more than 30 overseas logistics distribution warehouses since April 28, 2016, realizing the full coverage of the Indo-China Peninsula and smoothing the land transportation channel in Central Asia.

So far, the Base has built a cross-border trade and logistics hub connecting southwestern, eastern, and southern parts of China with South and East Asia and Europe based on the regional highway logistics hubs and well-developed highway networks.

This breakthrough allows trucks from China to go directly to their destinations without transferring at border ports, thereby effectively reducing the risk of cargo damage, improving transportation efficiency, and catalyzing the interconnection of land transportation channels between Chongqing and the ASEAN region.

As supporting facilities such as sewage treatment plants, bus stations, primary and secondary schools have been continuously improved, a new business and logistics hub embodying city-industry integration has come into being.

The construction of opening-up channels has contributed to the agglomeration of the logistics industry. Twenty-four logistics giants, including JD Logistics, SF Express, Huochebang, and STO Express, have gathered in the Base, attracting more than 3,000 companies in the second investment promotion.

Compared with the products exported to the Association of Southeast Asian Nations (ASEAN)region from western China via Chongqing’s cross-border highway shuttles, the specialty products imported from the ASEAN region, in the same way, are relatively few.

The center is teeming with beer, coffee, handicrafts, solid wood furniture, and other products from ASEAN countries.

The center opened in June 2020 has served as a new platform for the exchange and centralized display and trade of commodities from the western China and ASEAN region. Eight institutions and enterprises have settled here in less than half a year.