Inscribed into the UNESCO World Heritage Collection in1999, the Dazu Rock Carvings is a collective term for a series of rock carvings dating back to between the 9th to 13th centuries. Remarkable for their aesthetic quality and rich subject matter and the light they shed on everyday life in China during this time. The Dazu Rock Carvings are spread across five mountains across Dazu District: Baodingshan – possibly the most famous, Beishan, Shizhuanshan, Nanshan, and Shimenshan mountains.

Dazu District is regarded as the district of rock carving and is located about 80 kilometers East of downtown Chongqing towards Chengdu in Sichuan Province.

How to go there

The most convenient way to travel to Dazu is by bus. From downtown Chongqing, the Long-Distance Bus Station near Chongqing North Railway Station has buses to Dazu for about 60 RMB; the trip takes around 2.5 – 3 hours depending on traffic conditions. From the Bus station in Dazu, you can take local buses to the Rock Carving Mountains. 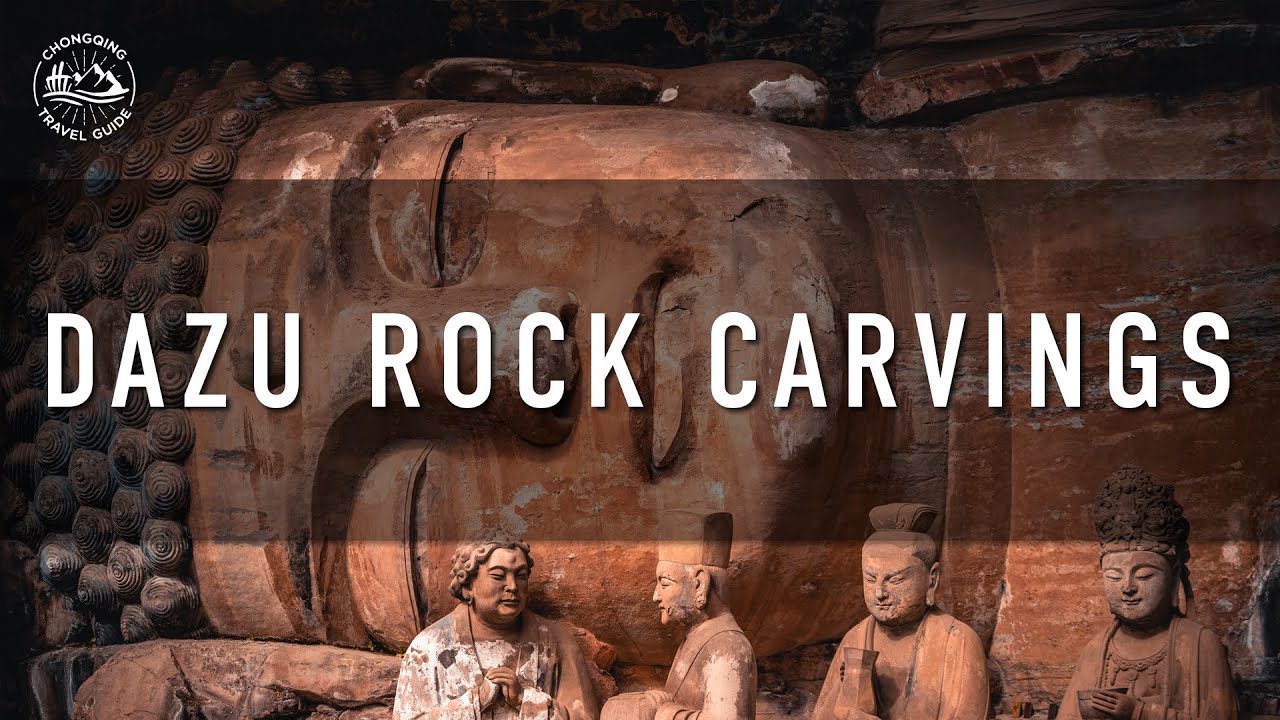 More than 800 years ago, at the young age of 19, a monk from Dazu embarked on a journey to create one of China’s most elaborate grotto carvings. Grotto art was the main media used to communicate the Buddhist belief as it traveled from India to China, and that is what we are exploring in this episode at the Dazu Rock Carvings.

Dazu Rock carvings are one of eight famous Buddhist carvings in the world. The collection of grottoes and carvings in Dazu contains more than 50.000 statues representing the highest level of grotto art from between the 9th to 13th century during the Tang and Song Dynasties in China. This kind of rock carving is also called Moya Carving, which refers to the technique of carving the statues directly into the cliffside.

The rock carvings depict not only Buddhism but also contain images related to Taoism and Confucianism. The carvings were made to publicize and show respect to religious figures and showcase everyday life in China. Walking along with the carvings, you will be able to see not only worship, but interactions across multiple social classes, everyday stories about parents, family, and love.

The influence of the rock carvings in Dazu has been felt across China. The artistic expression found here was a new step in realism and in exaggeration when it comes to depicting good and evil and beauty and ugliness. The carvings’ content reflects the moral and rationalistic call for the punishment of evildoers and encourages people to do good, and the carvings are considered natural, elegant, and fully reflective of Chinese culture.

The Rock Carvings in Dazu District are located across five mountains, each containing individual sets of grottoes, but they are all considered part of the Dazu Rock Carvings. Baoding Shan is the most famous and most visited of the rock carving sites, but if you really appreciate the story and culture behind these carvings, do not pass up an opportunity to visit the other locations.

Baoding Shan or Baoding Mountain is located 15 kilometers north of Dazu town. Dafowan is considered the center, and the rock carvings here were first constructed in the Southern Song Dynasty in 1179. The rock carvings here were organized and started by a local monk named Zhao Zhifeng and the construction time of the carvings was more than 70 years. It is considered a large Buddhist Tantric Dojo and the essence of the Dazu Rock Carvings. Baoding Mountain features magnificent rock figures and tells many unique stories. Some of the highlights of the Baoding Mountain carvings are the reclining Buddha and the 1000-armed goddess, which underwent renovations in recent years to restore its former beauty with a new layer of gold paint meticulous restoration work.

The Bei Shan or North Mountain carvings can be found about 15 kilometers Northeast of Dazu town. Similar to the Baoding Mountain carvings, here you will find an assembly of carvings with a unique level of detail and realism. The Bei Shan Carvings are also very well preserved and showcases elaborate craftsmanship. Visitors here can enjoy the graceful statue of Samantabhadra Bodhisattva, crowned as the Oriental Venus. The carvings here are mostly Buddhist in Nature.

The Nan Shan or South Mountain rock carvings are located only about 2 kilometers South of Dazu town. The carvings here are regarded as one of the ten scenes of Dazu since ancient times, and the area here contains a Jade Emperor Temple, still well preserved on top of the mountain. South Mountain has 15 grottoes mainly themed with Taoist statues also with fine craftsmanship and makes up the largest and most concentrated amount of Taoist stone carvings in China.

Shimenshan or Shimen Mountain carvings are located 20 kilometers east of Dazu town. At Shimen mountain, you can see a mix of Buddhist and mostly Taoist statues. In addition to the statues themselves, Shimen mountain also contains several inscriptions and remarks written next to them. The representation here of the godly figures is very vivid and imaginative. Many of the statues here show the Buddhist and Confucian doctrines, particularly filial piety.

Finally, we have Shizhuan Shan or Shizhuan Mountain. Located about 25 kilometers Southwest of Dazu town, the carvings here are a niche of Confucius and Lao Tzu. This is one of few places where you can see Buddhist, Taoist, and Confucius statues integrated together, a rare sight in Chinese Grotto art.

Dazu District is perhaps most famous for its Rock Carvings in Baodingshan, but that is not all that Dazu has to offer. Let’s see what else you can experience here.