The year 2021 marks the fourth anniversary of the pilot FTZ. In 2020, Chongqing tried to develop new strengths in inland opening-up at a faster pace.

According to Chongqing Port and Logistics Office, the city upgraded the construction of international logistics channels in the following fields: mechanism innovation, quality improvement, institutional innovation, and development of a multimodal transport logistics system featuring logistics channels in all directions as well as coordination among the four modes of transport involving highways, railways, waterways, and air routes. 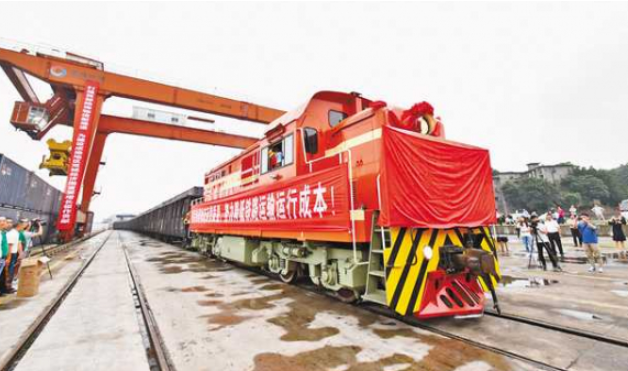 By relying on the Belt and Road, New International Land-Sea Trade Corridor, and other outward passageways, it can also take on the heavy responsibility of China’s economy’s external circulation. (iChongqing file photo)

In 2020, rail-sea intermodal transportation, international railway transportation, and cross-border highway transportation saw 1,297 and 160 trains and 2,821 shuttle buses departed from Chongqing, respectively, an average growth of over 100%. The Chongqing-centered ILSTC had reached 260 ports in 96 countries.

By the end of 2020, about 3,500 railway TEUs had been delivered via rail-sea intermodal transport. The total cost for each container had decreased by around 1,000 yuan, and the time for customs clearance had shortened by 40%.

Eastwards, Chongqing tapped potentialities, improved the efficiency, and expanded the golden waterway of the Yangtze River; ships regularly traveled to and fro between Chongqing and Shanghai. The city also took the lead in China to pilot the “departure confirmation” in customs transit for goods imported via water transportation, increasing efficiency by 40%.

Chongqing completed the test on Guoyuan Port container regular ships, and shipping on the Jialing River achieved historical breakthroughs. The number of trains running between Chongqing and Ningbo doubled.

Northwards, Yuman’e (Chongqing-Manzhouli-Russia) International Railway Logistics Channel witnessed a respective growth of 65% and 137% in the number of trains and goods’ value new development in size and quality.

Chongqing celebrated further progress in developing an international aviation hub, with the number of international air routes reaching 101. Chongqing Base of Air China Cargo, the city’s first cargo base airline, was established.

Thanks to the holistic logistics system, Chongqing was able to keep shortening the time needed for customs clearance and reducing the compliance cost.

Specifically, in 2020, the customs clearance time for import and export had been cut by over 65% and 90%, respectively; the regular charge for import/export of a single container had been reduced to less than 400 U.S. dollars.